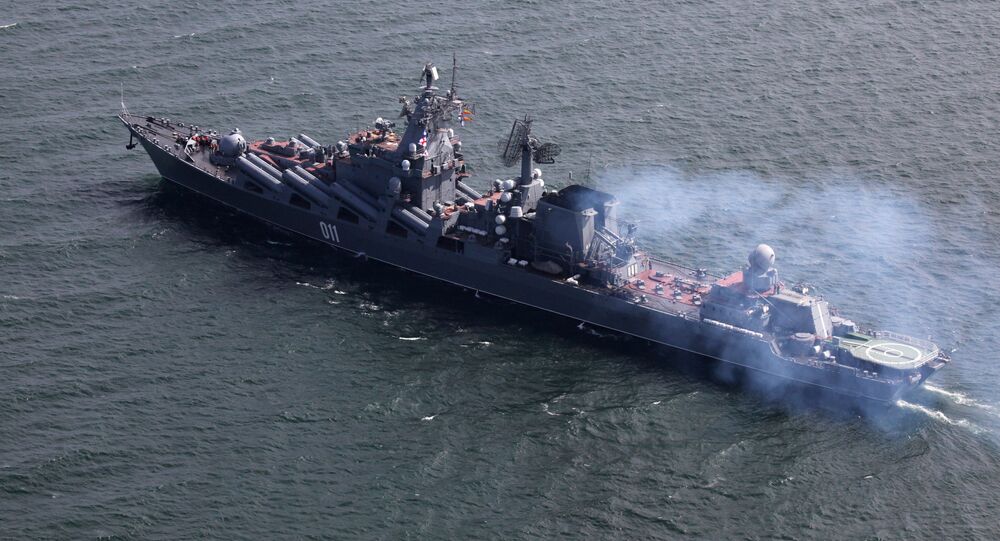 While the US Navy continues to beef up its presence in the Asia-Pacific region, the Russian Pacific Fleet is by no means sitting on its hands, Russian military expert Viktor Murakhovsky told RIA Novosti, unveiling how the Russian Navy may respond to the assertive US military strategy in the region.

© Sputnik / Vitaly Ankov
111 Years of Naval Glory: Landmarks of Russian Submarine Fleet
Exactly 85 years ago today, on April 21, 1932, the Soviet Pacific Fleet was established; today the Russian fleet that eventually succeeded it is preparing for new military challenges and flexing its muscles.

Although the Russian Navy in the Pacific still has many problems to solve, it enjoys significant advantages over any potential adversary in the region.

Interestingly, since the beginning of 2017, the Russian Pacific has caught up with the Northern and Black Sea Fleets in terms of the number of references to it in the media.

These exercises are being held amid a sharp increase in the presence of the US Navy in the Asia-Pacific region, where the American Navy has been conducting regular naval drills alongside their Japanese and South Korean allies.

© REUTERS / U.S. Navy
Empty Threats: Why Trump's Vow to Strike North Korea Was a Bluff
To complicate matters further, in early April the American destroyers USS Porter (DDG-78) and USS Ross (DDG-71) launched a massive missile strike against Syria from the Eastern Mediterranean. Following the attack, the White House signaled that a strike group led by the USS Carl Vinson was sailing to the Sea of Japan to deter North Korea.

Although the Pentagon later clarified that the USS Carl Vinson and the three other warships were, in fact, heading elsewhere, Washington's assertive stance has prompted serious concerns among Russian military experts.

They believe that under the smokescreen of naval drills and deterrence operations in the Asia-Pacific region, the Pentagon could have been quietly exploring the capabilities of the Russian Pacific Fleet in order to either limit or undermine its ability to work outside Russian territorial waters.

© Sputnik / Vitaliy Ankov
Russian Pacific Fleet submarines during Navy Day celebrations in Vladivostok
© REUTERS / Kim Hong-Ji
US to Enhance Military Presence in Asia Pacific - Vice President Pence
"The group includes three 667BDR Kalmar (Squid) Delta-III class submarines and two new Project 955 Borei [nuclear-powered ballistic missile] submarines. They are part of the 25th Submarine Division. The main task of the Russian Pacific Fleet is to allow submarines cruisers to enter the areas of combat deployment, when necessary. To accomplish this task, the Pacific Fleet should maintain dominance in the Okhotsk Sea area… However, the Americans are well aware of the challenge posed by these five nuclear-powered cruisers and they will try to counter it," Murakhovsky said.

The expert emphasized that one of the most burning issues is the modernization of the fleet. Although a complete renovation of the Pacific Fleet is likely to take decades, the process is already underway.

This year the Pacific Sovershennyy ("Perfect") corvette (Project 20380) is due to enter service while another three ships from this class are currently being built at Russia's Amur Shipyard and Northern Shipyard. Furthermore, a multi-purpose frigate (Project 22350), the Admiral Isakov, is expected to leave its berth by 2020. This powerful assault ship will be armed with 3M-54 Kalibr (NATO codename SS-N-27 Sizzler) cruise missiles.

© Sputnik / Ildus Gilyazutdinov
Amur Shipyards workers and the vessel's crew during the floating out of The Sovershenny corvette built for Russian Navy's Pacific Fleet.

Murakhovsky remarked that it is still unclear whether Russia's largest missile cruiser, the Admiral Lazarev, will join the Pacific Fleet anytime soon. Currently laid up and in reserve status, the battleship is likely to dramatically strengthen the Pacific Fleet after modernization.

But that is not all: according to Murakhovsky, geography is the main and most effective ally of the Pacific Fleet in the region.

The expert called attention to the fact that Vladivostok and Petropavlovsk-Kamchatsky, the two main Russian naval bases, are located far from each other. Murakhovsky sees it as a great advantage: from the two flanks, the fleet together with the naval aircraft maintain control over the strategically important Sea of Okhotsk.

At the same time, control over the Kuril Islands allows Russian warships and submarines to go out into the ocean and to prevent the penetration of hypothetical adversaries into Russia's territorial waters.

"Our second advantage is coastal defense forces," Murakhovsky said, "Two divisions are being formed in the Far East, with one based on the Kuriles, and the other — in the area of Kamchatka and Chukotka. In the event of any conflict, they will strike enemy ships from well-fortified land positions. Now, these tasks are performed by the 520th and the 72nd separate coastal missile and artillery brigades."

Moreover, the "Redoubt" coastal anti-ship missile systems, which have a striking range of 460 kilometers (285.8 miles), will be replaced with modern "Bal" and "Bastion" systems, equipped with Kh-35 and Onyx anti-ship missiles, respectively, within the program aimed at boosting the coastal defense.

Speaking to RIA Novosti, Murakhovsky emphasizes yet another important development in the region: the Russian armed forces are building a new logistics hub in the Kuriles.

"This will significantly increase the time for patrolling our water area by the Pacific Fleet," the Russian military expert explained, "Previously they had to return for refueling and replenishing their reserves, either to Sakhalin or Vladivostok. In addition, new airfields for [Russian] combat aircraft are being built on the [Kuril] Islands with modern air defense systems, such as the S-400, which is being deployed in the region."

Last but not the least are the regular naval drills, according to the military expert.

"The Pacific fleet remains effective mainly because it constantly conducts military exercises," Murakhovsky highlighted, "The level of training of our [Russian] sailors has surpassed Soviet indicators in a number of parameters."