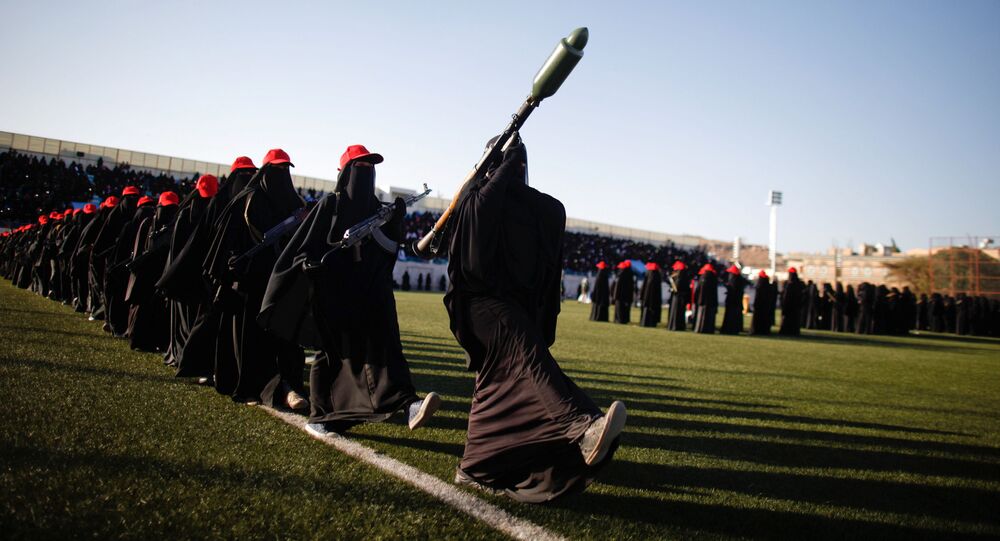 On his way to Riyadh, US Secretary of Defense James Mattis offered Yemen a glimmer of hope when he said that the conflict there needs to be resolved "as quickly as possible" through UN-sponsored peace negotiations. However, Yemeni politician Muhammad Anam says Yemenis shouldn't get their hopes up, since the US is really pursuing other interests.

"We will work with our allies, with our partners to try to get it to the UN-brokered negotiating table," Mattis said, speaking to reporters on his way to Saudi Arabia as part of his week-long Mideast trip.

© AFP 2020 / FAYEZ NURELDINE
This is How Riyadh's Bellicose Threats Against Iran Can Backfire on Saudi Arabia
Trying to find a balance between supporting an end to the war and support for the US's Saudi allies, who have engaged in a brutal military campaign against the Houthi militia that took over much of the country in 2014, Mattis emphasized that both sides would benefit from a peaceful settlement.

"It has gone on for a long time, we see Iranian-supplied missiles being fired by the Houthis into Saudi Arabia and this is something, with the number of innocent people dying inside Yemen, it has simply got to be brought to an end," Mattis said, recalling the flimsy allegation by Riyadh that the Houthis were really an Iranian client.

The secretary of defense offered no details about whether the US would promise any additional military support to the Saudi-led coalition, but indicated that Washington would be looking to 'deepen and broaden' the US-Saudi relationship.

© REUTERS / Khaled Abdullah
Newly recruited fighters ride on the back of a truck during a farewell ceremony as they head to the battlefront to fight against government forces in Sanaa, Yemen, January 19, 2017

The US is already involved in the war in Yemen indirectly, providing intelligence and aerial refueling support for the Saudi-led coalition. Earlier this month, the Pentagon announced that it would be increasing the number of special forces missions on the ground in the country, although their efforts are ostensibly concentrated against al-Qaeda in the Arabian Peninsula (AQAP), which operates in Yemen's east and south.

Human rights groups, political analysts and former government officials have broadly condemned the Saudi-led bombing campaign, which began in March 2015, telling Sputnik that the Saudi effort, including airstrikes on Yemeni infrastructure and the blockade of Houthi-controlled ports, threatens to throw the country into a famine threatening millions of lives.

Observers have also recalled that Secretary Mattis is thought to be a hardliner on the Yemen issue within the Trump administration, urging stronger US support for Riyadh.

Earlier this month, responding to reports that President Trump was considering providing direct US assistance for a Saudi-backed offensive on al-Hudaydah, a key port controlled by the Houthi militias, a group of 55 US representatives urged the president to consult with Congress before taking any military action. A campaign against the Houthis, who present "no direct threat to the United States," would "take too many resources away from the counterterrorism fight against AQAP," the Representatives' appeal to Trump said.

© AP Photo / Abdulnasser Alseddik
Sheer Barbarism: Thousands of Artifacts Obliterated in Yemen Since Start of Saudi-Led Operation
Speaking to Sputnik Arabic about the significance of Secretary Mattis's visit, Muhammad Anam, senior leader of the General People's Congress, Yemen's main political party, said that he believed that the US would only be increasing its support for the Saudi-led coalition, and even shifting resources from its operations in Syria and Iraq to Yemen.

"The US has long been involved in the Yemeni conflict," Anam noted. "Since March 2015, Washington has been providing military support to Saudi Arabia. It's possible that the shelling of civilians, which have caused the deaths of many women and children, became the official reason for increased US involvement in the conflict."

In reality, the political leader argued, Washington's calculations are far more sinister. "Officially, the US called for a fight against the terrorists from al-Qaeda and Daesh. However, the US supports these terrorists in Yemen, in the same way that they support them in Syria and Iraq."

"Saudi Arabia is just a tool in the hands of US politicians," Anam stressed. "The actions of both countries are directed toward the realization of political interests. The Yemenis are the only ones fighting a real war against the terrorists [in the region]."

The politician suggested that among the US's goals in supporting the terrorists in Yemen and elsewhere was to "attack Russian interests."

US Congress, Aman noted, has already warned Trump over the consequences of providing more support for the Saudis and for Abdrabbuh Mansour Hadi, the ousted Yemeni president hiding out in Saudi Arabia.

US, NATO Allies Continue to Ignore Slaughter of Civilians in Yemen - Ex-Diplomat