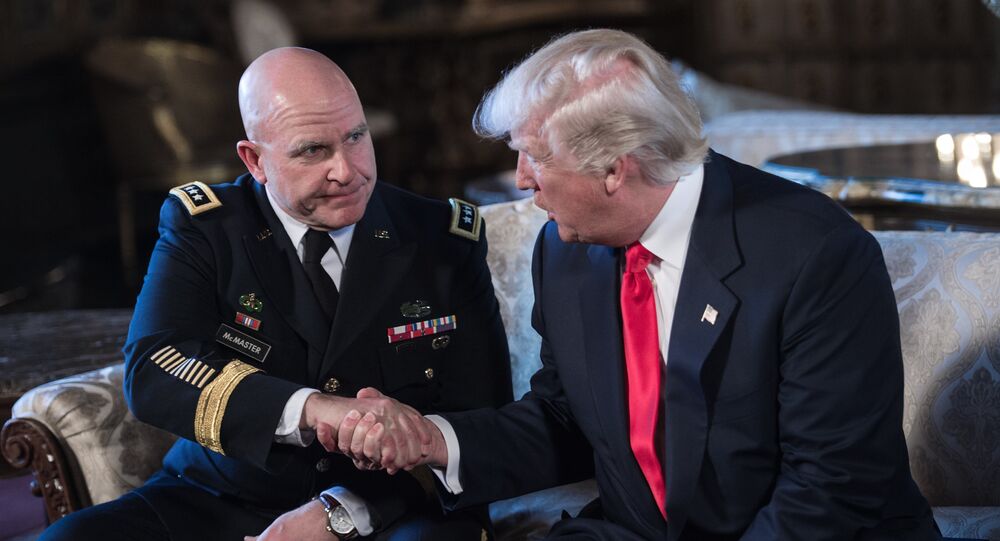 Trump National Security Adviser Herbert McMaster has cryptically accused Russia of 'subversive activities' in Europe, but made no effort to specify what he meant. Speaking to Radio Sputnik, Russian political observer Dmitri Abzalov suggested that McMaster's remarks were detrimental to any possible thaw in relations between Russia and the West.

Speaking to ABC News 'This Week' on Sunday, McMaster accused Russia of engaging in "subversive actions in Europe," noting that this, along with Moscow's support of the "horrible regime" in Syria, meant that it was time for Washington to have some "tough discussions [with] Russia."

© REUTERS / Maxim Shemetov
Over 80% of Russians Regard Russia-US Relations as Negative - Poll
The senior Trump adviser did not elaborate what 'subversive actions' he was talking about.

As for Russia's support for Syria, the retired US Army officer claimed that this support had helped to perpetuate the Syrian civil war, and to create a crisis which ended up 'bleeding over' into Iraq, other neighboring countries and into Europe. "Russia's support for that kind of horrible regime – [the fact] that it is a party to that kind of a conflict, is something that has to be drawn into question," he noted.

Earlier this month, the US launched 59 Tomahawk cruise missiles at a Syrian airbase after accusing Damascus of having carried out a chemical attack on a rebel-held town in Idlib province just days beforehand. Moscow slammed Washington's actions, and called for an impartial investigation into the chemical attack.

Curiously, McMaster did not mention the role played by US allies Turkey, Saudi Arabia and Qatar in inflaming the Syrian crisis, or their funding and arming of the jihadist groups which would end up claiming their allegiance to Daesh (ISIL/ISIS) or the Nusra Front, an al-Qaeda offshoot.

Trying to balance out tough talk with a perceived willingness in Washington to negotiate with Moscow, McMaster stated that he hoped that "when relations are at the lowest point, there's nowhere to go but up." The adviser also stressed that it was important "to find areas of cooperation," and figure out "where do our interests align – what can we accomplish together."

© Sputnik
'Hand of the Kremlin'? Out of 11 French Presidential Candidates, 7 'Pro-Putin'
Western officials, media and pundits have repeatedly accused Russia of interfering in their countries' political processes, starting with November's presidential elections in the United States. Most recently, a UK parliamentary commission hinted that Russian hackers may have been responsible for hacking a voter registration website ahead of last year's Brexit referendum. Internet security experts have called the claims ridiculous and unsubstantiated.

Commenting on Lt Gen McMaster's remarks, Russian political analyst Dmitri Abzalov told Radio Sputnik that they seemed to be a ploy to disrupt any real improvement in relations between Russia and the United States.

McMaster himself, Abzalov suggested, has no idea what kinds of "subversive Russian actions in Europe" he was talking about. "His statement, first and foremost, was aimed at weakening the emerging stabilization in relations [between Russia and the West]."

© REUTERS / Yonhap
Lavrov: Russia Hopes US Not to Take Unilateral Actions Against North Korea
"Ultimately this is an attempt to disrupt the warming [in relations] that's taking shape," the analyst reiterated. "Furthermore, it's an attempt to solve the US's internal problems." Russia, the analyst indicated, has taken the role of boogieman to distract from internal issues.

As for McMaster's words about the need for "tough discussions" with the Russians, Abzalov stressed that this approach was unrealistic. "McMaster can 'talk tough' only in front of his own mirror. In the current situation, a 'tough' discussion with Russia will be quite problematic for Washington. First off all, without consultative conversations, it will be difficult to negotiate on Syria or the DPRK, or on the EU. Without Moscow things will be extremely difficult here."

"Therefore," the observer suggested that McMaster "is simply trying to 'raise the stakes' and thus strengthen his negotiating positions. But it's worth recalling that this kind of 'hard line' was earlier talked about by [President Donald] Trump, and then by [Secretary of State] Tillerson, but things ended up at a much softer position. Therefore, I don't think that McMaster can offer something more meaningful in this regard," Abzalov concluded.

Indeed, Russian observers have recently pointed out that while Russia is ready and willing to negotiate, a 'tough talk' isn't really the best way to get Moscow's ear. Whether on Syria, Ukraine, or other issues in international relations, tough talk and sanctions pressure have not succeeded in pushing Russia to back down on issues it sees as vital to its national security.

© AFP 2020 / PAUL J. RICHARDS
Spicer's 'Hitler' Remark on Assad Had 'Sobering Effect' on US Policy in Syria
Judging by Russian officials' recent remarks, Moscow's foreign policy doctrine of mutual respect and non-interference in other countries' internal affairs continues to be applicable to both the Syrian issue and to any claims of Russian interference in Western elections.

Commenting on last week's talks with Secretary Tillerson, Foreign Minister Sergei Lavrov indicated that although the results of the talks might not be visible any time soon, the two sides had "agreed to establish a dialogue on a number of important issues," and this was an important first step. As for Tillerson's expected 'ultimatum' on Syria, the Russian Foreign Ministry said that it hopes Washington has come to realize that presenting Moscow with such ultimatums is both "useless" and "counterproductive."

Over 80% of Russians Regard Russia-US Relations as Negative - Poll