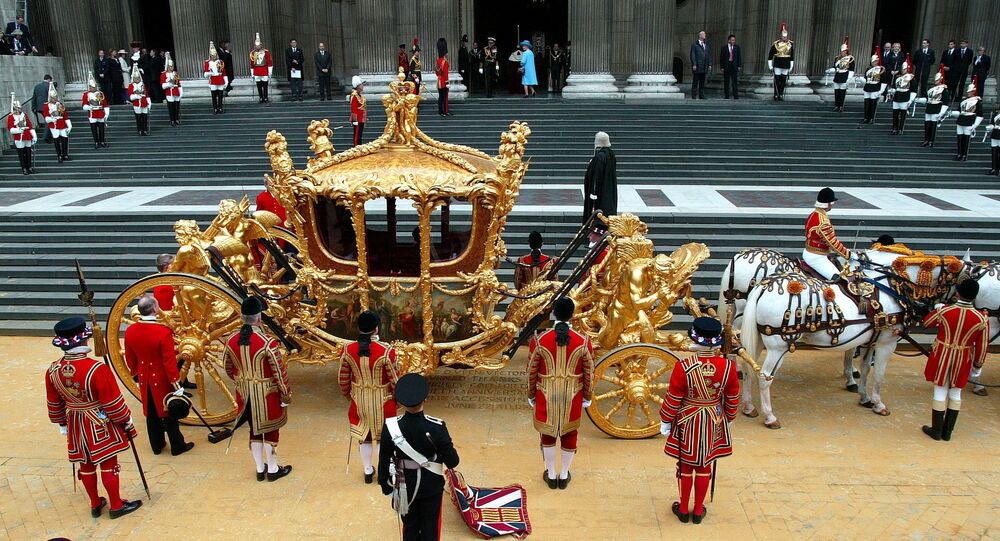 Look at Me! Trump Wants to Ride in British Queen's Gold Carriage

As conflicts in Syria, North Korea and elsewhere have the world on edge, US President Donald Trump has found something to distract him: a ride in Queen Elizabeth of England’s golden carriage.

The US president has reportedly requested a ride in the historic gold horse-drawn carriage belonging to the Queen of England, a conveyance ordinarily reserved for coronations and high events of state, when he travels to the England to meet the country's longest reigning monarch.

He may be thwarted by the London metro police, however, who say the security threat posed by Trump's longed-for carriage ride is impossible to mitigate. In planning for the US president's October visit, the London police are offering up every excuse they can think of to change his mind.

Acknowledging an elevated threat risk due to the tens of thousands of protesters expected along the planned route, security teams in London have asked that Trump use the US-built vehicle normally reserved for such displays: the heavily-armored limousine that carries presidents on visits of state.

According to a source within the London Metropolitan Police, "The vehicle which carries the president of the United States is a spectacular vehicle. It is designed to withstand a massive attack like a low-level rocket grenade."

"If [Trump] is in that vehicle, he is incredibly well protected, and on top of that, it can travel at enormous speed. If he is in a golden coach being dragged up the Mall by a couple of horses, the risk factor is dramatically increased," the source added, according to the Times of London.

Seeking to guarantee state-of-art protection during Trump's visit, elite anti-terror units are meeting with advance US Secret Service teams in London to carefully plan the route and methods of his movements, according to local reports.

Remarking on how impractical the use of the famous horse-drawn carriage would be to transport a US president, the source added, "There may well be protections in that coach such as bulletproof glass, but they are limited. In particular it is very flimsy."

Commissioned in 1760, the structure of the royal carriage, "would not be able to put up much resistance in the face of a rocket-propelled grenade or high-powered ammunition," said the source, adding, "Armor-piercing rounds would make a very bad show of things."