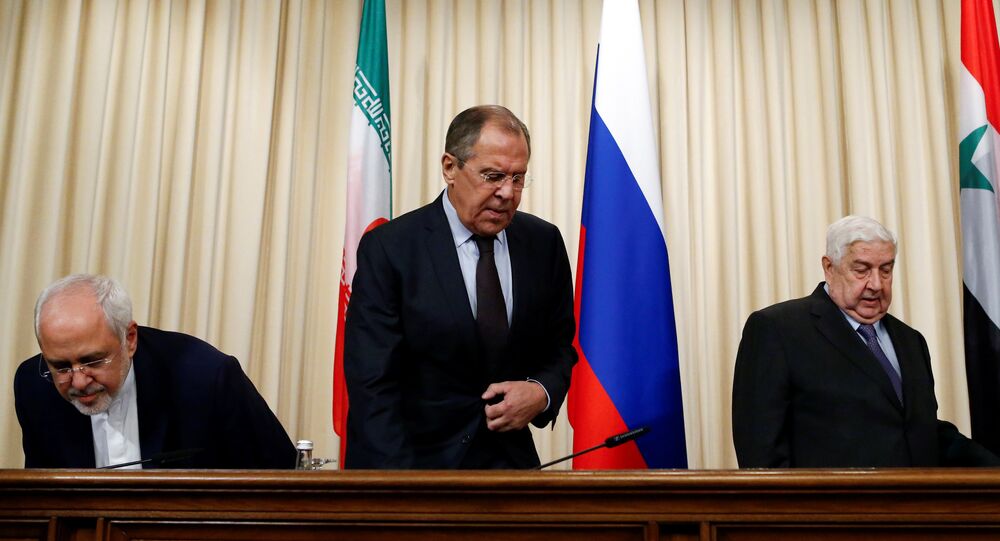 Evidence if mounting that the reported April 4 chemical weapons attack in the northwestern Syrian province of Idlib may have been staged, Lavrov said.

"There is growing evidence that this was staged, meaning the incident with the use of chemical weapons in Idlib province."

He cited expert opinion publicized in the West stating that "there are too many inconsistencies, discrepancies in the version used to justify the April 7 aggressive action," referring to the US Tomahawk missile attack on the Sha'irat airfield.

"We will insist on the strict fulfillment by all without exception of those obligations set forth in the UN Security Council resolution, including full respect for the sovereignty and territorial integrity of the Syrian Arab Republic."

He asserted that attempts at regime change in Syria embodied in last Friday's US Tomahawk missile attack on the Sha'irat military airfield would fail.

The three countries insist that the US and its allies must respect Syria's sovereignty, Lavrov said, stressing that there must be a careful investigation of the chemical weapons incident in Idlib under OPCW auspices.

"All the information, facts that the Syrian government and the Russian aerospace forces in Syria have that the opposition used chemical weapons, including samples that were collected on site, including in Aleppo, not so long ago, are being sent to the secretariat of the Organisation for the Prohibition of Chemical Weapons (OPCW), subject to all conditions of such transportation. Three months ago, we sent another batch of such samples related to the use of chemical weapons in eastern Aleppo. So far no reaction has been received from the secretariat," Lavrov told press conference.

"Within just over a year, the OPCW said in its report that the entire declared amount of poisonous chemicals was destroyed [in Syria]. That is a medical fact, as they say, it was written in black ink on white paper in a report presented to the UN Security Council," Lavrov said after a meeting with his Syrian and Iranian counterparts in Moscow.

The minister recalled that the United States was responsible along with Russia for the destruction of Syria's stockpile.

"Our US colleagues have for some reason made recent claims that Russia alone is a guarantor of Syria's chemical disarmament, while the United States allegedly has nothing to do with this. I want to remind everyone that it was Russia and the United States that came up with the initiative to start this process under OPCW and UN auspices when Syria agreed to join the Chemical Weapons Convention and destroy its poisonous materials," Lavrov said.

© AFP 2020 / Omar haj kadour
Russian MoD: US Covers Up Aggression With 'Pseudo-Proofs' in Relation to Idlib
Russia's proposal on the investigation of Idlib chemical attack is being met with resistance, Lavrov said.

Lavrov added that any reaction from the OPCW on the data provided by Moscow and Damascus concerning militants' use of chemical weapons in Aleppo was absent.

Both Russia and Iran favor an OPCW investigation into the reported chemical attack in Idlib with the participation of specialists from different countries, Lavrov said, adding that claims of Moscow not trusting the organization are false as Russia just wants the probe to be transparent.

Those who are trying to block the proposal of Russia and Iran on the establishment of an independent commission to investigate the chemical attack in Syria's Idlib province have something to hide, Lavrov said.

"Attempts to block the proposals of Russia and Iran to establish an independent commission to conduct an impartial, objective investigation only indicate that those who are trying to do so have a bad conscience."

Lavrov said that the US missile attack on a Syrian airfield was aimed at the regime change.

© AFP 2020 / Mohamad ABAZEED
Idlib Province to Become the 'Final Act of the Syrian War'
Syrian Foreign Minister then called the trilateral meeting with Lavrov and Zarif a 'strong message' after the US strike in Syria.

He added that there is no justification for the US missile attack on the Syrian airbase.

"We shall facilitate everything which will lead to the success of the commission’s work on investigation. Our question is as follows, why are the United States and its allies afraid of such commission being established? If the US strike has no justification, it is blatant aggression against Syria’s sovereignty," Muallem told reporters in Moscow.

The Foreign Minister of Iran agreed with his Russian and Syrian counterparts on the need to boost cooperation in fighting terror, as well as carrying out the chemical attack probe.

Zarif said that chemical weapons cannot be used as a pretext for any actions against sovereignty and territorial integrity of an independent state.

"The use of chemical weapons as a pretext for taking actions against the sovereignty and territorial integrity of an independent state and a UN member is very dangerous. The international investigation is required in this case… It is necessary to prevent such actions in the future."

"We shall increase the level of cooperation on the international level. The first track is the investigation of his act, of this incident … The second, international cooperation on fighting terrorism and extremism … The third direction is restoration of the political plan," Zarif said after talks with Muallem and Lavrov in Moscow.

An international investigation of the suspected chemical attack in Idlib, Syria must be conducted on the ground, but the United States conducted a missile strike because it did not want to clear things up, Iranian Foreign Minister Javad Zarif said Friday.

"It is not possible to investigate this issue remotely. It must be investigated on the ground. When on April 4, Syria was accused, we have immediately demanded an investigation, we must establish the fact. Unfortunately, the United States took an aggression even before the investigation. Thus they did not want the fact to be established. And they wanted to use it for their political goals. We re-emphasize that the investigation should be conducted on the ground," Zarif told reporters.

Early April 7, the United States launched 59 Tomahawk cruise missiles at the Syrian military airfield in Ash Sha’irat, located about 40 kilometers (25 miles) from the city of Homs. US President Donald Trump said the attack was a response to the alleged chemical weapon use in Syria's Idlib on Tuesday, which Washington blames on the Syrian government. Russia described the attack as an aggression against a sovereign state.