MOSCOW (Sputnik) — Ryabkov told reporters that Moscow's readiness to "go to any depths" in cooperation against Daesh (banned in numerous countries) jihadist group was relayed to US Secretary of State Rex Tillerson during his visit to Moscow this week. 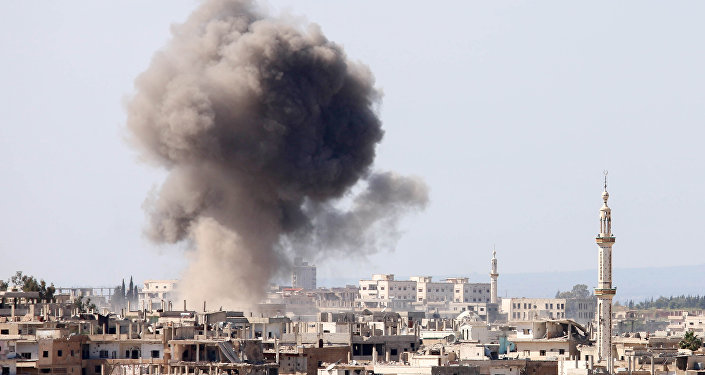 "In any case, we insist that everything should be carried out within the framework of international law," Ryabkov said.

The Syrian news agency SANA reported that a US strike on Wednesday had hit toxic chemicals compiled by Daesh (banned in Russia) near Deir ez-Zor, killing hundreds of people.

"The exchange of information is underway, but we are not officially announcing that the document has been reopened," Ryabkov told reporters.

He said it was his understanding that the amount of information to exchange is determined "depending on the situation."

Russia believes that the United States will be able to decide on who will fill the post of the co-chair in the Russia-US group on normalization of ties, Russian Deputy Foreign Minister stated.

"We must wait for clarification on which of the senior deputies of the state secretary will deal with relations with Russia. I think it will happen rather quickly," he told reporters.

On April 7, Russia suspended cooperation on the memorandum of incident prevention in Syria due to the US missile strikeы against the Syrian government’s Ash Sha’irat airbase in the Idlib province a day before.

However, Russian Foreign Minister Sergei Lavrov said in a press conference with US Secretary of State Rex Tillerson on Wednesday that Moscow was willing to reactivate the line if the United States reaffirms the goal of combating terrorism.

The memorandum of understanding on air safety over Syria between the armed forces of Russia and the United States has been effective since October 2015. The two sides have held regular talks in compliance with the memorandum.