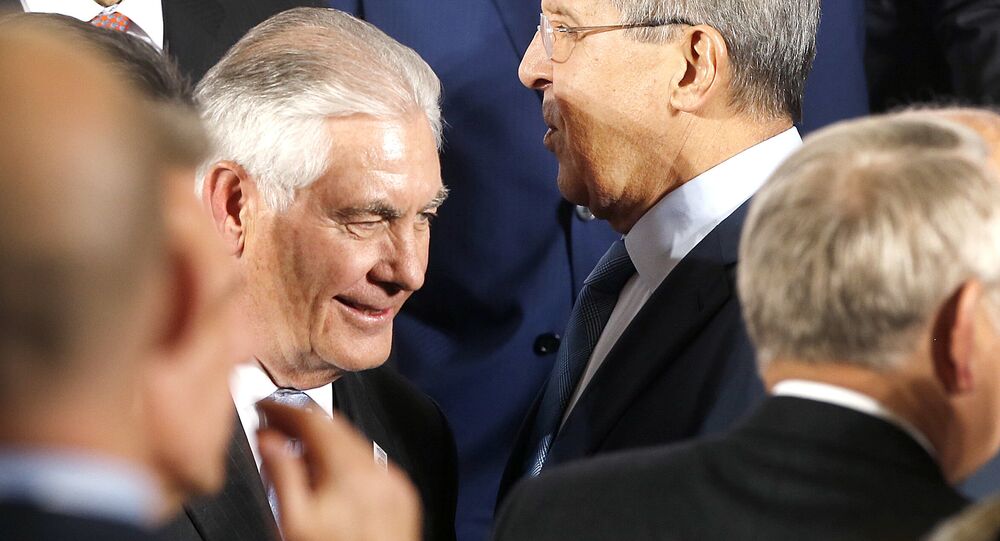 Russian Foreign Minister Sergey Lavrov said Thursday he had stated to US Secretary of State Rex Tillerson the previous day that its recent attack on Syria contradict the goal of combating terrorism.

MOSCOW (Sputnik) — On April 4, the Syrian National Coalition of Revolutionary and Opposition Forces reported a chemical weapon attack in Idlib. According to recent data provided by the World Health Organization (WHO), 84 people, including 27 children, died in the incident. Syria denied the government's involvement in the incident, but the United States carried out a missile attack on the Syrian government's airbase of Ash Sha'irat, claiming, with no evidence provided, that the chemical attack was launched from there. Putin said that groundless accusations were unacceptable before the investigation into the matter had been carried out.

"We reminded them that US actions like the April 7 attacks on Syria contradict this task," Lavrov said, recalling that he and Tillerson discussed the need to intensify Russian-US efforts and mobilize the international community to fight terrorism.

The United States launched 59 Tomahawk cruise missiles at the Syrian military airfield in Ash Sha’irat last Thursday, claiming that it was a response to the alleged chemical weapons use in Syria's Idlib province three days prior.

"We insists on the most thorough, independent, objective investigation of this incident," Lavrov said of the reported April 4 chemical attack in Khan Shaykhun.

The Russian Defense Ministry said that week that the Syrian air force airstrike near Khan Shaykhun hit a terrorist warehouse that stored chemical weapons slated for delivery to Iraq. It called on the UN Security Council to launch a proper investigation into the incident.

"Attempts to surreptitiously, without any inspections, adopt a Security Council resolution condemning the government are unfounded. Of course we cannot support and will not support these attempts," Lavrov stressed.