Last week, President Donald Trump met with Chinese President Xi Jinping, reaching agreement on a range of issues, including a new 100-day trade plan. Observers say Washington is now actively working to try and break the Russian-Chinese strategic partnership, but add that the international division of labor makes these plans doomed to fail.

On Friday, Trump said that the US had made "tremendous progress" in its relationship with Beijing following Thursday and Friday's landmark summit meeting with China's Xi Jinping in Palm Beach, Florida.

© AP Photo / Alex Brandon
US, China Make 'Tremendous' Progress in Bilateral Relations - Trump
The two countries agreed to establish a new channel for top-rank military communication to avoid military incidents, and to strengthen existing military-to-military cooperation at all levels. They also agreed to a new 100-day plan for trade talks meant to increase US exports and reduce its trade deficit with China. Finally, US officials reported that the two sides had agreed to the need for cooperation to get Pyongyang to abandon its nuclear ambitions.

The meeting at Mar a Lago coincided with the US cruise missile strikes against Syria Thursday night. President Trump informed his Chinese counterpart of the attack during their joint state dinner. Against this background, Trump's granddaughter sang for the Chinese leader, and recited a poem in Chinese.

Russian observers have suggested that such demonstrative use of both the 'carrot and stick' in negotiations demonstrates the extreme importance which the US has staked to relations with China. This contrasts sharply with the president's rhetoric while on the campaign trail, when he made the claim that Beijing was a 'currency manipulator', that it had "raped" the US economy and that the money and jobs stolen from the US by China was "the greatest single theft in the history of the world." Now, analysts say, Trump's behavior speaks to a desire to establish closer ties to Beijing, and at Moscow's expense.

However, not everyone is convinced about US prospects for success, particularly as far as weakening Russian-Chinese ties is concerned. Sergei Sudakov, political scientist and professor at the Academy of Military Sciences, believes that any concentrated effort by Washington to separate Beijing from Moscow will fail. 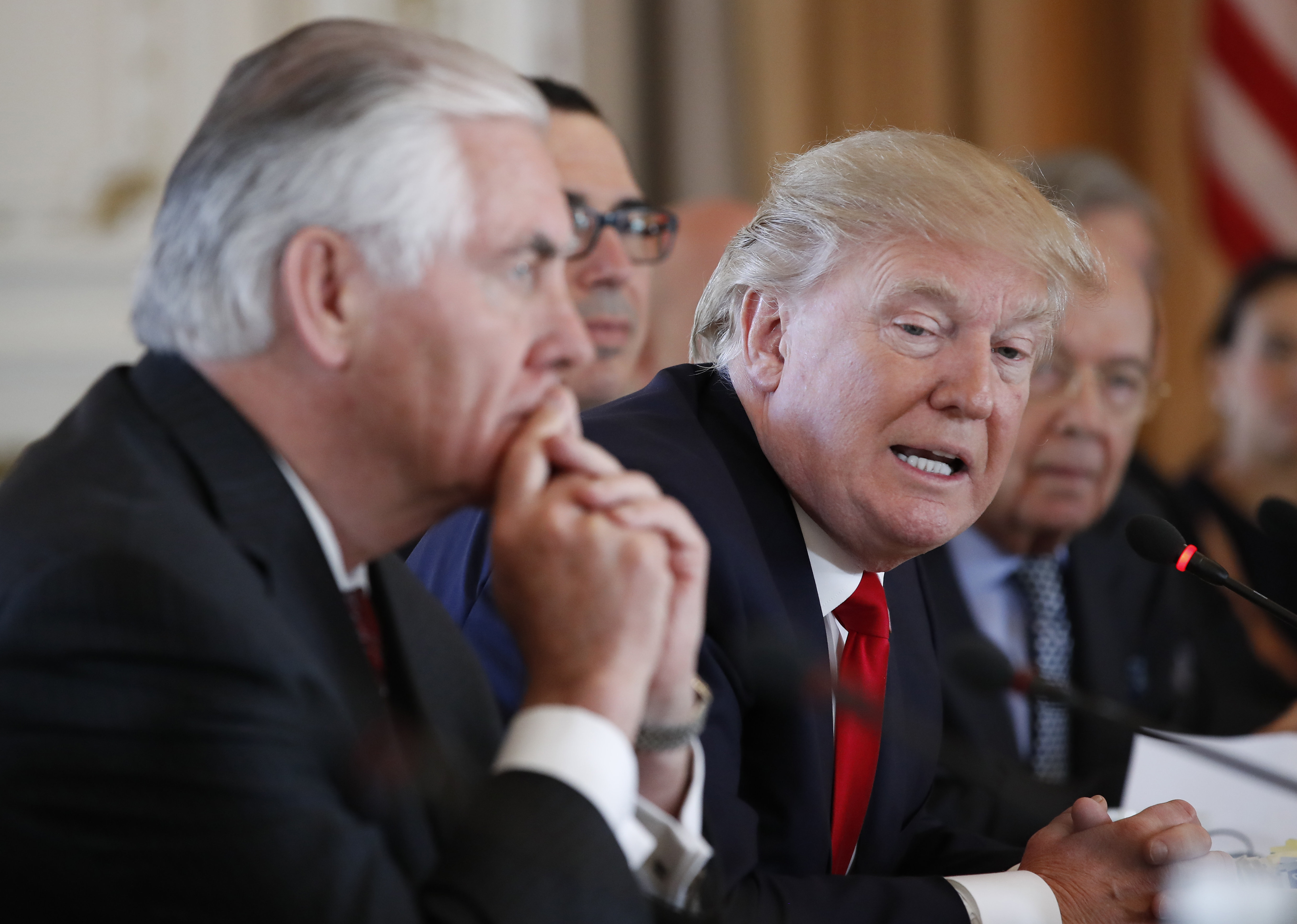 "The biggest problem for the US right now is that Donald Trump has not yet decided on his foreign policy," Sudakov said. "This is why his meeting with Xi Jinping took place against the backdrop of events in Homs province," (where the US conducted cruise missile strikes against the Syrian government). "Of course, Trump wanted to impress the Chinese leader, and to show that he sees his task being to tear China off from its cooperation with Russia."

In recent years, the expert recalled, a triangle of major powers, including the US, China and Russia, has been formed. "It's worth recalling what Xi Jinping said at the latest forum in Davos. He said that the world is changing, and that the US could no longer dictate to the world on how to act, and that they could no longer be the single global hegemon." The world system, he said, needs balance.

© REUTERS / Carlos Barria
Xi, Trump Discussed Situation in Syria During Meeting in US - Chinese Foreign Ministry
"In turn," Sudakov  suggested that "Trump's goal has been to show that the US remains the [global] leader…However, the key issue is that of trade between the US and China. Today, China has a $200 billion surplus. The task for the American president is to increase trade between the two countries by about $1 trillion."

President Xi, for his part, "was not inspired by his meeting with Trump," Sudakov speculated. "He did not hear the proposals that he expected to hear from the leader of the world's [leading] power. There were many platitudes and mutual good wishes, but Russia remains closer to China than the US," trade turnover notwithstanding. "In other words," the expert noted, "the expansion of bilateral ties between Washington and Beijing can be called a policy of 'sworn friends'…"

Political scientist and Eurasia expert Leonid Krutakov agreed with his colleague. According to the expert, Russia and China are destined for strategic cooperation, due to the peculiarities of the international division of labor, and the unequal distribution of resources across the planet.

The US, he said, can be figuratively categorized as a transactional economy, with the Federal Reserve system's policy consciously turning it into the provider of institutional services to all other economies – hence the concentration of banks, insurance companies, R&D, etc. in the US. This, however, has resulted in major side effects, including the death of American industry, which has been moving to China en masse, thus creating the problems of widespread unemployment and regional degradation.

"Germany is also important as a high-tech power, but is not seen as dangerous to the US, because it is factually an occupied territory. The third sector, apart from services and production, is resources. This includes the Middle East and Russia."

Krutakov pointed out that "when the BRICS group of nations appeared, it became clear that the countries from the resource sector, including Russia and Brazil, were trying to unite with the industrial economies of India and China in a new way. For the US, this was a threat, because if a piece of the world market of this size were to drop out of the dollar zone, then few other countries would need the US's transactional services. Washington would only serve Europe and the Americas, while the main centers of industrial production, and the resource regions, were outside this area."

Russia and China, possessing resources on the one hand and a developed industrial base on the other, need one another, according to the analyst; "hence the policy of convergence."

"Russia's turn to the East did not happen suddenly – not just in 2014. In 2008, all territorial claims [between Moscow and Beijing] were settled. The basis was laid for strategic agreements. Our initiatives in the Arctic, the renewal of the so-called Northern Sea Route, the development of the Caspian shelf – all of this was work for a common future," a common economic and geopolitical strategy.

© AFP 2019 / NICOLAS ASFOURI
Tough Bargain: Why Asian Countries Don’t Want to Choose Between China or US
According to Krutakov, Washington has already calculated that by 2025-2030, China's economic growth will be 90% dependent on the country's access to energy resources. Accordingly, if the US is able to subdue the Middle East and Russia, it can continue to ensure its hegemonic position. "In this case, China will not be able to stand one's ground. Therefore, for Beijing, alignment with Moscow carries a strategic character. The retention of parity with the US simply delays any possible future conflict in the hope of having enough time to become self-sufficient together with its allies."

Therefore, Krutakov noted, being unable to fight both the industrial and resource bases of the world, the US strategic goal is to keep Moscow and Beijing from leaving the dollar zone and creating their own system of payment settlement, which would only tie them closer together.

"Hence the policy of the carrot and the stick. Trump will use all possible methods to achieve this: to issue threats, to shoot Tomahawks, and to flirt with China. But any large-scale rapprochement between the US and China is [ultimately] not possible," the analyst concluded.

Tough Bargain: Why Asian Countries Don’t Want to Choose Between China or US