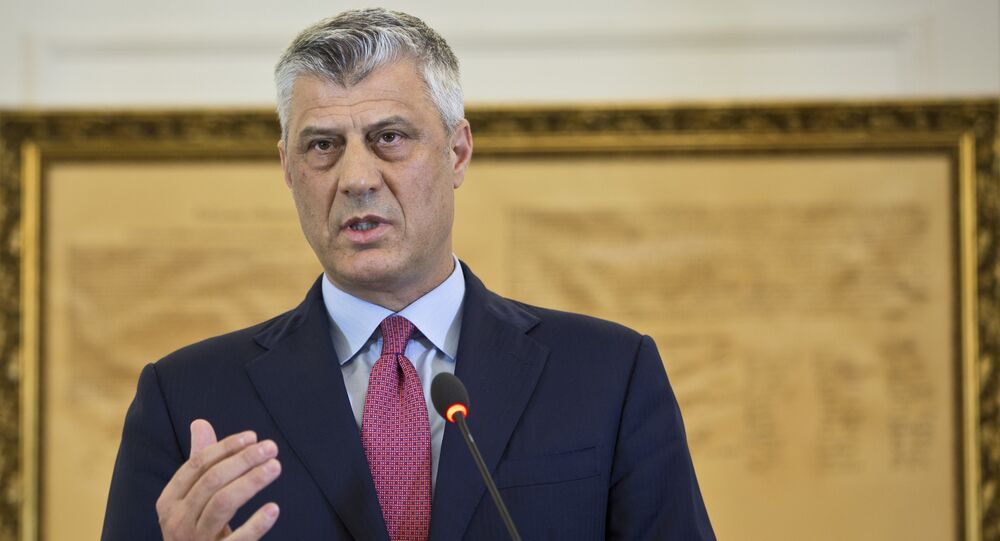 President of the self-proclaimed republic of Kosovo Hashim Thaci carried out yet another provocation by stating that Pristina was planning to file lawsuit against Serbia for committing "genocide" in Kosovo, Serbian First Deputy Prime Minister and Minister of Foreign Affairs Ivica Dacic said Wednesday.

BELGRADE (Sputnik) — According to media reports that emerged earlier in the day, Thaci said Pristina was preparing to file a lawsuit against Serbia "for genocide in Kosovo."

"Hashim Thaci continues to carry out provocations. Since the idea of forming the so-called Kosovo army and the legislation were withdrawn under the pressure of the international community, Thaci decided to switch the public attention to the other topic — the lawsuit against Serbia for genocide," Dacic said, as quoted in the Foreign Ministry's statement.

He noted that Kosovo was not a member of the United Nations and therefore had "no right for a lawsuit against Serbia in the Hague."

"It is well-known that it was not Serbia, which committed genocide in Kosovo but rather the Kosovo Liberation Army [KLA] committed genocide against the Serbian people. It is evidenced by the data on the decreased number of Serbs in Kosovo and Metohija today than it was until 1999," the minister said.

© AP Photo / Darko Vojinovic
Pristina Snaps Up 200 Billion Euros' Worth of Serbian Property in Kosovo
Dacic added that the UN International Criminal Tribunal for the Former Yugoslavia had never accused Serbia of genocide and a special court for the KLA war crimes had been formed instead.

In 1999, the Kosovo War between the KLA and Yugoslavia, by then consisting of Serbia and Montenegro, started. NATO, led by the United States, engaged in a 78-day military campaign against what was then Yugoslavia over alleged repressions of Albanians in Kosovo. The conflict resulted in the death of over 2,000 civilians and 1,000 security personnel.