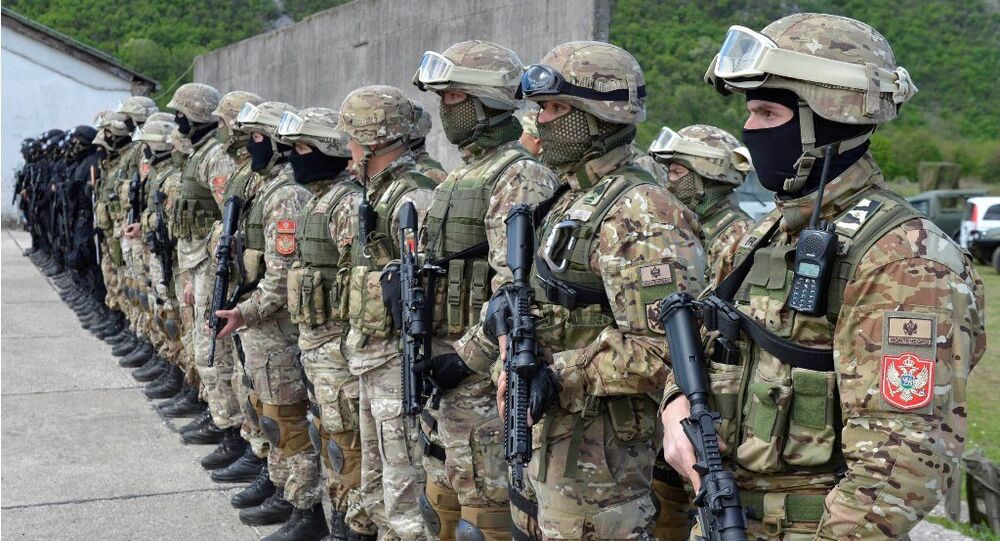 On Tuesday, the US Senate voted in favor of Montenegro's admission into NATO. The move left some US congressmen wondering whether the small Balkan nation would add anything to the bloc’s security and military capability.

The US Senate approved Montenegro's bid to enter NATO Tuesday, citing the necessity to thwart Russia's influence in Europe.

"It is a nation in this contest that we are now engaged in with Vladimir Putin, who has committed to extending the reach and influence of the Russian government… to the point where he attempted a coup to overthrow the freely elected government of Montenegro," Sen. John McCain (R-Ariz.), well-known for his Russophobic stance, claimed Monday.

© AFP 2021 / OLIVIER MORIN
US Senate Approves Montenegro Joining 28-Member NATO Alliance
"If we turn down Montenegro, it will not remain the democracy that it is today," he added, as quoted by The Washington Post.

In late February the UK mainstream media reported that a senior in the British government suspected Russian intelligence of plotting a coup in Montenegro back in October 2016, during the country's parliamentary elections. Montenegro's national special affairs prosecutor Milivoje Katnich echoed the claim. However, no credible evidence has yet been presented to confirm Moscow's involvement in the alleged plot.

Speaking to Sputnik on February 20, Montenegrin political journalist Matija Nikolic explained that Podgorica was pointing the finger of blame at Russia to accelerate the process of the country's accession to NATO.

The crux of the matter was that the Montenegrin government feared that the Trump administration could have rejected the country's NATO bid.

Indeed, in mid-March NATO Secretary General Jens Stoltenberg stated that the attempt to stage a coup in Montenegro serves as an argument for the country to join the Alliance.

"For me, this is an argument in favor…. It is a sovereign right of every nation to… decide which path it wants to choose, including what kind of security arrangements they want to be part of," Stoltenberg told journalists.

© AFP 2021 / Armend Nimani
Unclear How Montenegro NATO Accession to Boost Alliance's Security - Lavrov
It turned out later that Podgorica's fears were unjustified: in a letter dated March 7 Secretary of State Rex Tillerson urged the leaders of the US Senate to approve Montenegro's NATO membership, stressing that it was "strongly in the interests of the United States."

It is no secret that Moscow opposes the eastward expansion of NATO citing growing security concerns.

Montenegro's accession to NATO threatens to destabilize the region, Russian ambassador to Serbia Alexander Chepurin told Sputnik, commenting on the US Senate vote.

"Attempts to push several Balkan nations to NATO, to change their genetic code, without asking the people's opinion — are the issues that destabilize the situation in the Balkans," Chepurin emphasized.

"Attempts to drag Montenegro into NATO is nothing more than the desire to show that the open door policy is alive…. It is clear to everyone that, as of now, this policy has completely exhausted itself, it not only failed to eliminate or erase the dividing lines in Europe, it deepens them, and, speaking of our country, these dividing lines only move closer to us," Grushko said.

In early March Sputnik Serbia talked to Montenegrin professor Vladimir Bozovic of the non-governmental organization Matica Srpska and historian Sasa Adamovic who stressed that American politicians distort the facts of Montenegro's enthusiasm to join the Alliance.

Furthermore, "NATO would not gain anything from Montenegro's accession into the Alliance given its military, and economic potential, as well as in other areas," Adamovic stressed.

Paul said Monday that "admitting Montenegro to NATO will do nothing to advance our national security and will do everything to simply add another small country to the welfare wagon of NATO."

"The United States is pledged to defend 28 countries in NATO. It is unwise to expand the monetary and military obligations of the United States given the burden of our 20 trillion debt," he underscored.

Poland to Reduce Participation in Eurocorps Over NATO Obligations