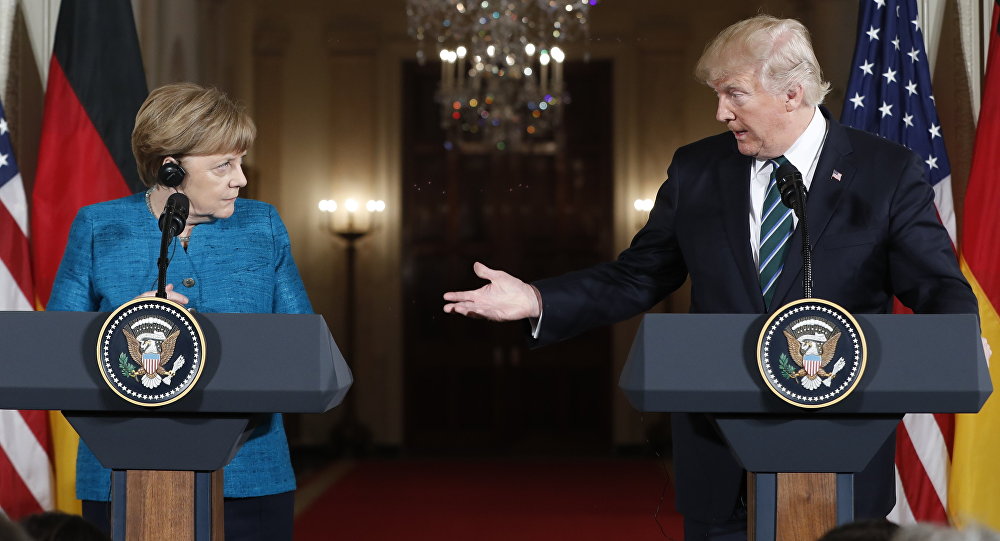 British newspaper The Times, which first reported the incident, cited an unnamed German minister. The report claimed that Angela Merkel was handed a bill by the US president during her recent visit to DC, for failure to meet NATO's defense spending target of 2 percent of GDP.

"The concept behind putting out such demands is to intimidate the other side, but the chancellor took it calmly and will not respond to such provocations," the unnamed official told the paper.

© AP Photo / Evan Vucci
‘We Have Something in Common’: Trump Jokes With Merkel About Obama Wiretapping (VIDEO)
The report claimed that Trump had asked White House aides to calculate the difference between Berlin's defense spending and the 2014 agreement by member nations to pay NATO two percent of their GDP — plus interest.

White House spokesman Michael Short quickly made the rounds after the news story broke on Sunday, calling it completely false.

Trump has not been quiet about his belief that Germany owes money to both NATO and the US, even tweeting about their debt following Merkel’s visit.

"Despite what you have heard from the FAKE NEWS, I had a GREAT meeting with German Chancellor Angela Merkel. Nevertheless, Germany owes vast sums of money to NATO and the United States must be paid more for the powerful, and very expensive, defense it provides to Germany," Trump said in a series of two tweets.

During a joint news conference after the two leaders met in DC, Trump expressed support for NATO, while also decrying nations that do not pay their fair share.

“Many nations owe vast sums of money from past years and it is very unfair to the United States. These nations must pay what they owe,” Trump said.