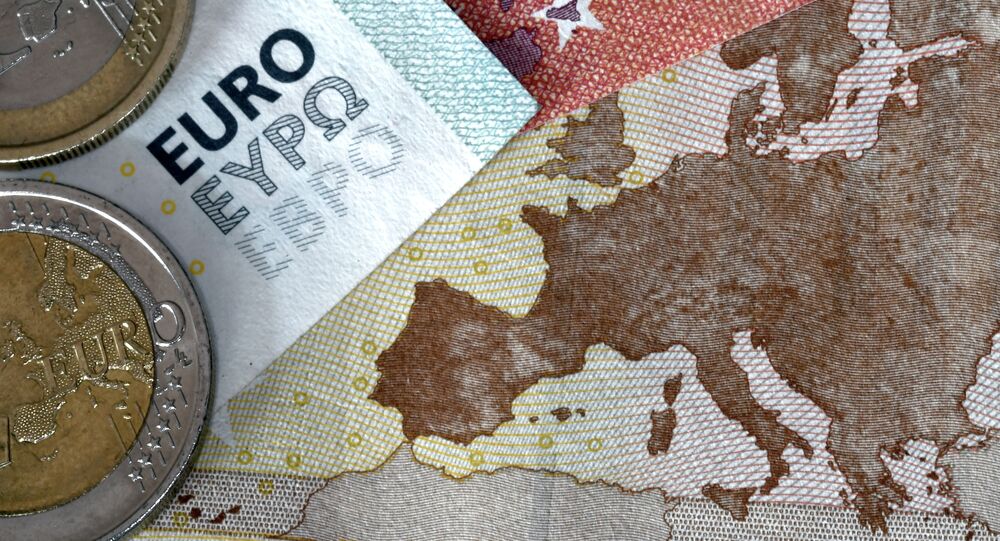 The EU's seeming unity at the recent Rome Summit was the result of numerous concessions made by Brussels to disenchanted EU member states. Nonetheless, tensions continue to simmer within the bloc, despite the Roman Declaration draft repeatedly being changed to satisfy all the participants of the meeting.

© AFP 2021 / PHILIPPE HUGUEN
'Two-Speed' Europe: A Last-Ditch Effort to Save the EU Bloc
It seems that the 60th anniversary of the treaty that led to the establishment of the European Union has not met Eurocrats' aspirations: multiple revisions of the Rome Declaration — the main document of the summit — indicate growing divisions within the bloc.

Commenting on the changes the declaration's draft had undergone, Agence France-Press (AFP) pointed out that while the document was expected to proclaim the "multi-speed" European Union, Brussels changed the phrase and only stated that the bloc would proceed at "different paces" while "moving in the same direction."

"We will act together, at different paces and intensity where necessary, while moving in the same direction, as we have done in the past," the final version of the document reads.

© Photo : Pixabay
Czech Republic 'Will Say a Flat No' to 'Multi-Speed' Europe - MP
Likewise, the phrase saying that the union promotes "gender equality" was re-written because of the pressure exerted by European conservatives. It now reads that the EU is "a union which promotes equality between women and men."

For its part, Greece insisted that the final draft would add a mention that the bloc is an economic power with "unparalleled levels of social protection and welfare."

Interestingly enough, "Britain's shock vote to leave does not get a mention," AFP noted.

"Only through numerous concessions to Poland, Hungary, Greece and other 'dissident' countries did the EU leadership manage to save face and show the world at least the appearance of the bloc's unity," Russian online newspaper Vzglyad wrote.

© AP Photo / Darko Vojinovic
Change of Pace: 'Multi-Speed Europe' is Only Way to Prevent Breakup of 'Core EU'
The "two-speed" Europe concept had predictably become the apple of discord.

"Initially… it was assumed that the 'two-speed' European Union would have two centers: the first one will include the countries that have switched to the euro (Germany, Belgium and France as major driving forces); the second one would consist of countries which retained their currency," the media outlet elaborated.

"However, under the current circumstances, this idea meant a banal and rigid segregation of European countries on the basis of poverty and wealth: Germany, Belgium and France would have refused to sponsor the fragile economies of the EU periphery, while the countries of the south and the east of Europe would finally have turned into a market for French and German goods and a supplier of cheap labor," Vzglyad emphasized.

Speaking to Sputnik Czech ahead of the Rome Summit, Leo Luzar, the chairman of the Czech parliament's subcommittee on foreign economic relations, stressed that the idea does not make sense.

"It makes no sense, really. If we see Europe as a single whole, there should be no 'first class' and 'second class' citizens, which I believe would be the end of the EU," Luzar stressed.

Warsaw also signaled its dissatisfaction with the plan on the eve of the summit.

"We cannot accept any announcements of a two-speed Europe. This would mean either pushing us out of the European Union or downgrading us to an inferior category of members. We must oppose that with all firmness," Jaroslaw Kaczynski, the leader of the Eurosceptic governing Law and Justice Party (PiS), stated on March 20, as cited by Reuters.

While the declaration's ambiguous language has apparently eased tensions over the "multi-speed" development of the EU member-states, there is more to the problem than meets the eye.

"The jubilee summit exposed many intra-European contradictions," Vzglyad pointed out, "There is the competition between the rich North and the de-industrialized South. There is also a dispute over the values of the traditionalist East and the 'progressive' West. There is, finally, the issue of the EU goal-setting: started 60 years ago as a modest customs union of six countries, the bloc has grown into a colossal bureaucratized organism with huge ambitions, an ambiguous economy and a rigid ideology."