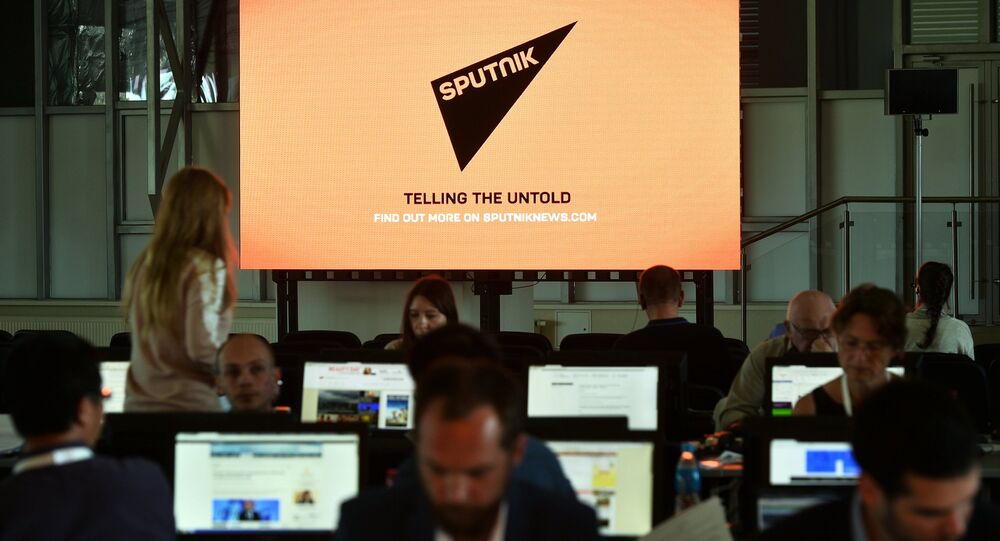 In a recent analysis devoted to the growing importance of Russian media in Egypt and across the Middle East, journalist and VetoGate contributor Mustafa Barakat suggested that Russian news resources' alternative perspective has forced the behemoths of Western mainstream media to launch a media war against them.

Pointing to the media's crucial role in forming and shaping public opinion, Barakat emphasized that in today's world, "the media is often times even more powerful than the fiercest and deadliest of weapons."

© AFP 2020 / YURI GRIPAS
FBI Reportedly Checks Sputnik, RT Over Russia's 'Interference' in US Election
With this in mind, the journalist recalled that after the collapse of the Soviet Union, the United States took advantage of the huge vacuum which was formed in the international arena, taking every opportunity it could find to expand its political influence. "And this expansion of political influence was inevitably accompanied by the expansion of the US's sphere of informational domination, aimed at reinforcing its point of view," Barakat added.

"However, it did not take long until the Russian Federation, under the leadership of President Vladimir Putin, realized the danger posed by a unipolar world. Therefore, Moscow prepared for a 'world war' of a new kind — through the media, broadcasting in all the languages of the world."

"This provoked anger among the West and the US in particular, which tried in every way possible to thwart these projects," the journalist noted. "However these [Russian media] gained popularity and won over a large audience worldwide; as a result, many people started looking at things differently than they had when they were presented with only one viewpoint. This is the role in the world arena played by RT and Sputnik."

Barakat emphasized that the RT Arabic news channel, along with its internet portal, have become an important media platform for Egyptians and for the Arab world in general. Crucial to the network's success, he said, has been the professionalism of its presentation. "The channel covers events in a professional way, and avoids the one-sided approach from which other Arab media as Qatar's Al-Jazeera and other resources devoted to Arab affairs tend to suffer."

"And as the Arab audience gradually began getting used to getting its news from Russian resources and media, another powerful Russian project appeared, firmly establishing itself in the media arena in the space of just a few months." This of course, was Sputnik, the radio broadcaster complimented by news portals in over 30 languages.

Sputnik, Barakat stressed, has played an important role in "restoring media balance in the world, revealing facts which had been hidden by others. For this reason, many international and Western media resources unleashed a fierce war against the resource, attempting to sow doubts about its professionalism and credibility. However, they failed miserably in this attempt, because the agency's policy is based from top to bottom on professionalism, and on working to adjust common misconceptions."

The opening of Sputnik's Cairo office triggered a major reaction from the Arab and world media, the journalist suggested, sparking optimism among some about the prospects of information balance, and fear among others that information might be disclosed which would alter Arab public opinion, and thus lead to corresponding political changes.

Speaking to VetoGate.com about Sputnik Arabic's goals, deputy editor in chief Zainab Amir explained the Russian portal's key aim is as follows: "From the very first day after Sputnik's launch two years ago, Russia was striving to turn this project into the nucleus of a new generation of media from the perspective of restoring global informational balance. From the first weeks, Sputnik proved able to establish a place for itself among the largest global and Middle Eastern media."

Established between 2012-2013, the Veto daily newspaper and its online version VetoGate are among the leading independent news resources in Egypt.