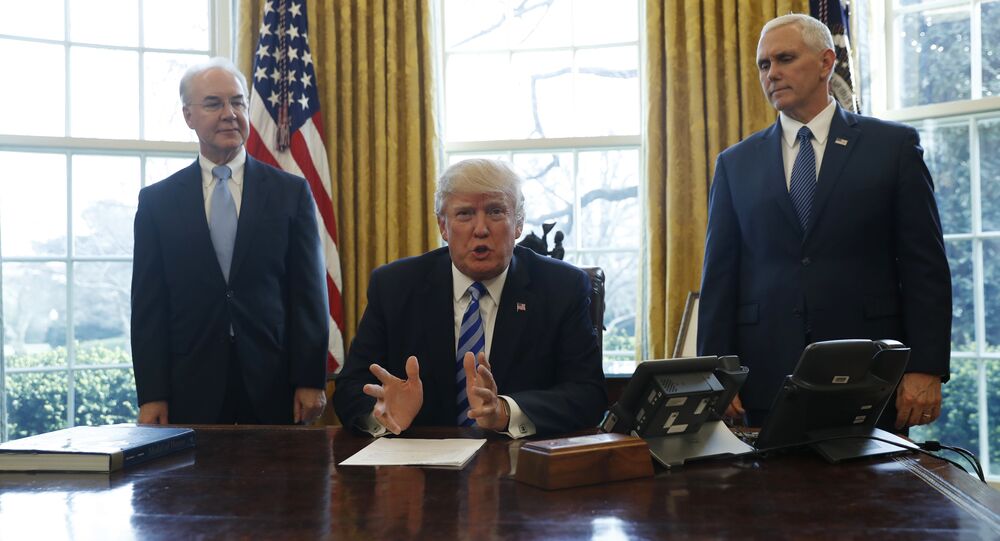 US President Donald Trump said his party's proposed health care bill, the American Health Care Act, came very close to getting the votes it needed, but that it failed due to a lack of Democratic support - despite his party controlling both houses of Congress.

Trump said he was "a little surprised" by the House Freedom Caucus' opposition, even though the caucus' leaders have claimed the bill did not meet their standards since the day it came out.

"A lot of people don't realize how good our bill was," Trump said. Apparently many in the House Freedom Caucus didn't realize it either.

He said he'd learned a lot about party loyalty and that it was a "very close" vote on the bill, adding "it was a very tight margin." He estimated that the bill was 10 or 15 votes short of passing.

The president does not regret starting his administration's agenda with healthcare. "But I'm glad I got it out of the way," Trump said.

Meanwhile, Democratic House Minority leader Nancy Pelosi declared proudly, "Today is a victory for the American people," referring to the fact that Obamacare, or the Affordable Care Act, will remain the law of the land.

Trump immediately directed blame toward the Democrats. "The losers are Nancy Pelosi and Chuck Schumer," he said. The president, however, has enough members of his own party to pass the bill in the House, making blaming Democrats seem like a transparent effort to conceal the mammoth failure in leadership to whip the needed votes for Trump's biggest campaign promise: repealing and replacing Obamacare.

Trump said he learned a lot from the process of trying to pass comprehensive health care reform, including "vote-getting."

Trump claimed that Obamacare, the US's current health care legislation, is "imploding" and will eventually "explode." It isn't entirely clear whether Trump realizes that his job as a governor and as president is to ensure the laws of the land are enforced, whether he likes them or not.

Apolitical insurance analysts maintain that as long as the current subsidy mechanism is in place, rhetoric of an Obamacare "death spiral" is hollow. This bill, the 'budget reconciliation' bill, was the Republicans' best hope at dismantling the subsidy mechanism.

Trump wants to refocus his energy to an area where he may have a better shot at scoring a legislative victory: tax reform.

Trump definitively deflected all blame from both himself and the Republican party, despite the fact that Friday's legislative failure falls squarely on the shoulders of the people in power: Republicans.

Pence: Free Market is Solution to Soaring US Healthcare Costs Under Obamacare