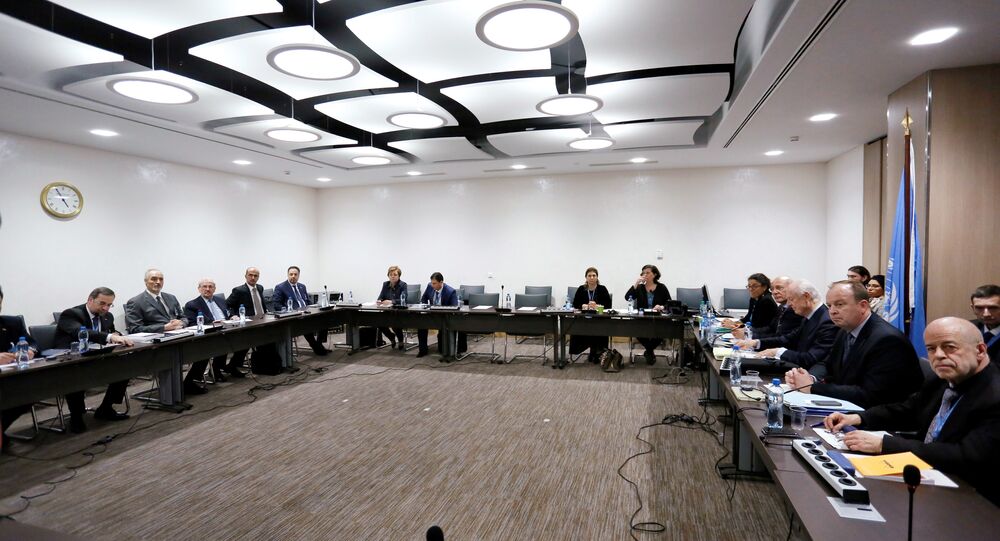 Astana conference were the talks to focus just on ceasefire and humanitarian issues and prisoners, but Syrian authorities did not release any prisoners, no humanitarian issues changed in the besieged areas, so Astana 1 and Astana 2 did not give anything, according to spokesman for the Southern Front Issam Rais.

© AFP 2020 / POOL
Geneva Talks Likely to Start With Governance, Anti-Terror Issues -Syrian Opposition Member
GENEVA (Sputnik) — Representatives of the Southern Front of the Free Syrian Army have come to the Geneva talks to focus on political transition, and their participation in a new meeting on Syria in Astana will depend on the outcome of this round, spokesman for the Southern Front Issam Rais told Sputnik.

Representatives of the military Syrian opposition, including the Southern Front, refused to attend the latest round of Astana talks on Syria.

"I am not saying we are coming to Geneva and did not come to Astana because Geneva is better than Astana, no. The war and military actions on the ground is something happening. But the diplomatic track will continue. We are here fighting a political fight. We are here to make a political transition," Rais said.

© REUTERS / Pierre Albouy
Cairo Platform Has ‘Modest’ Expectations From New Round of Geneva Talks – Official
Next meeting on Syria in Astana is expected to take place on May 3-4.

"This depends on the results of Geneva talks, the commitments of the Russian Federation to fulfill its promises to us during the previous rounds in Astana, and the situation on the ground," Rais said, asked on the possibility of the Southern Front participation in the next Astana meeting.

The fifth round of intra-Syrian talks in Geneva kicked off on Thursday and is expected to conclude on March 31, according to sources close to the meetings.