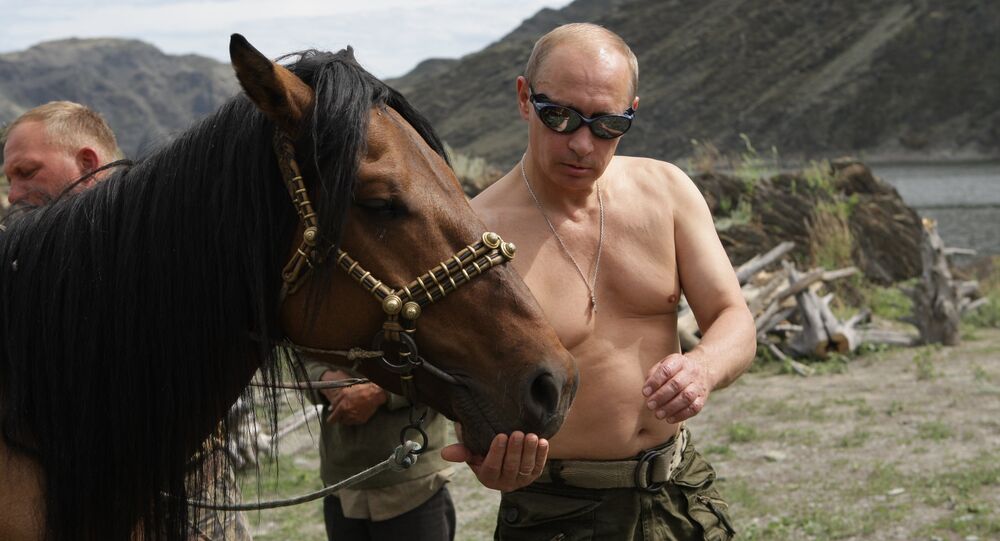 Putin the 'Tough Cookie': Not Bad Compared to Trump's Nicknames for Most Leaders

US President Donald Trump, the former business magnate whom Bill Clinton once described as a "master brander," has come up with a new description of Russian President Vladimir Putin, calling him a "tough cookie." Compared to the nicknames Trump has bestowed upon other politicians and leaders, 'Putin the Tough Cookie' doesn't sound half bad.

Appearing on Fox News on Saturday, Trump was asked by Watters' World host Jesse Watters to use between one and two words to describe an eclectic mix of people, from rapper Snoop Dogg to politicians Hillary Clinton and Elizabeth Warren, to billionaire Mark Cuban, and of course, Russian President Vladimir Putin.

"Don't know him, but certainly he is a tough cookie and I don't know how he's doing for Russia, we're going to find out one day I guess," Trump said, speaking of the Russian leader.

Trump's description quickly spread to the Russian section of the internet, where it was picked up by amateur comedians and news media alike.

#Trump on #Putin: ‘I don’t know him but certainly he is a tough cookie’ https://t.co/ckGOOLYp8k pic.twitter.com/5DEQydl9dN

Interestingly, in Russian, 'tough cookie' was actually translated as 'tough nut' – as in 'tough nut to crack', which incidentally is also the Russian name for the popular 1988 blockbuster Die Hard. Accordingly, Russian-language Twitter users began posting images of Bruce Willis with Russian flags –screenshots taken from the latest installment of the Die Hard franchise.

According to Dictionary.com, 'tough cookie' has several meanings, including 'tough guy' and 'stubborn or durable person.' Merriam-Webster, meanwhile, defines the term as 'a person who is physically and emotionally strong'.

Whatever the definition, it seems to be an almost terrifyingly concise and accurate description of how many Americans, and Trump himself, view the Russian leader, and Russian-US relations in general (from the US side at least).

In his interview with Watters, Trump described former presidential rival Hillary Clinton simply as "disappointed." The description was a far cry from the "Crooked Hillary" moniker he bestowed on Clinton during the presidential race. That description, which Trump came up with amid numerous scandals involving the Clinton Foundation, has stuck with Clinton ever since, both online and in many voters' minds.

© AFP 2021 / JIM BOURG / POOL
Democratic nominee Hillary Clinton (L) and Republican nominee Donald Trump arrive on stage during the second presidential debate at Washington University in St. Louis, Missouri on October 9, 2016
© AP Photo / Pablo Martinez Monsivais
Two Months Into Trump's Term, Mainstream Media Still 'Doesn't Get' Message Voters Sent It
As for Clinton ally Elizabeth Warren, a politician with whom Trump has had several very public feuds with in the past, the president rekindled his old nickname for the Democratic Senator in his Watters interview, saying "Pocahontas would not be proud of [Warren] as her representative, believe me."

Trump had called Senator Warren 'Pocahontas' in reference to her earlier statements that she had Native American origins, claims opponents challenged during her Senate run in 2012.

Before coming up against Clinton and her allies, Trump, whom former President Bill Clinton once described as a "master brander," had to work his way through the crowded pack of the field of Republican candidates in late 2015 and early 2016.

Using a combination of insulting but desriptive epithets, which voters would end up embracing, Trump called Senator Marco Rubio "Little Marco" over his stature, former Florida Governor Jeb Bush "Low-energy Jeb" due to the flagging energy of the latter's campaign, and Republican Senator Ted Cruz "Lyin' Ted" over his perceived dishonesty during the race.

Since becoming President, Trump seems to have decided to avoid branding political leaders with these kinds of punchy, descriptive nicknames, probably well-aware of the tremendous differences between how domestic politics and diplomacy with other countries works. Still, his new nick for 'Tough Cookie' Putin has led to hopes that perhaps the president will start a revival of his clever branding, so long as it doesn't insult anyone too badly or cause any diplomatic incidents.