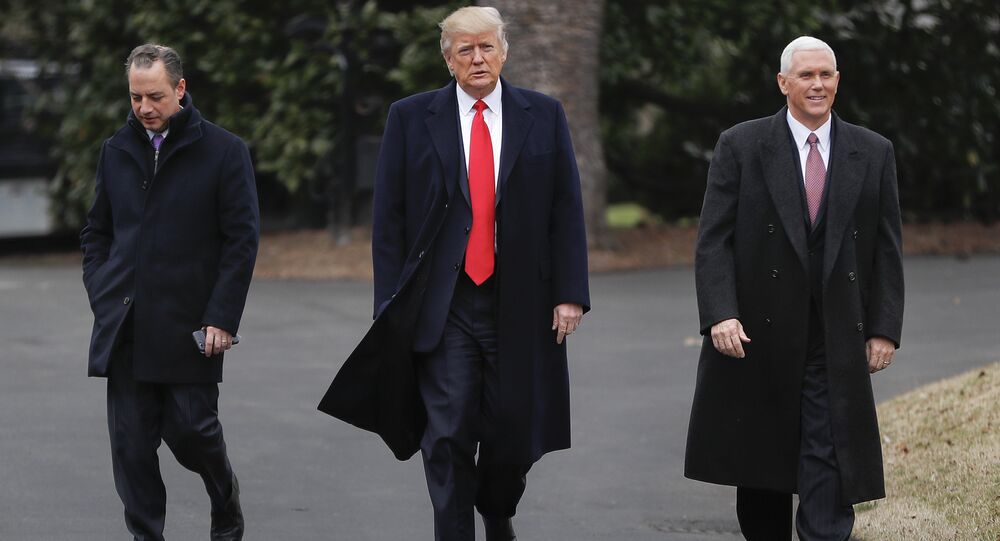 Julian Assange's statement that Hillary Clinton is secretly plotting "a Mike Pence takeover" in the Oval Office together with US intelligence officials has stirred a heated debate. Wall Street analyst Charles Ortel shared his views on the possibility of a House of Cards scenario being implemented in his interview with Sputnik.

Two IC officials close to Pence stated privately this month that they are planning on a Pence takeover. Did not state if Pence agrees.

​Assange specified that Clinton and her confidants within the US intelligence community spoke about nothing less than a Presidential impeachment.

It should be noted that both the officials close to Pence and Hillary Clinton spoke of moving towards an 'impeachment' not other action.

​The assumption has immediately sparked a heated debate among observers and prompted sharp criticism from Vice President Pence.

"I find all of that dialogue to be absurd and frankly offensive," Pence told CNN on the same day, commenting on the issue.

It appears that the famous American TV series "House of Cards" is about to become a reality. Is Assange's assumption credible and is it possible that Hillary Clinton and her supporters will succeed in replacing Trump with Pence?

Sputnik asked Charles Ortel, an investigative journalist and Wall Street analyst who exposed General Electric's fraud before its stock crashed in 2008, to comment on the matter.

© AP Photo / Sven Hoppe
US Vice President Mike Pence, center, his wife Karen, second from left, and his daughter Charlotte, left, are lead by Holocaust survivor Abba Naor, second from right, as they visit the former Nazi concentration camp in Dachau near Munich, southern Germany, Sunday, Feb. 19, 2017, one day after he attended the Munich Security Conference.

"Mike Pence seems to be an honest, devout, conservative who has little in common with Hillary Clinton or her various backers," the Wall Street analyst said, "In many ways, I think our Vice President will prove an equally formidable foe to the Clintons, to the Obamas, and to others in the Soros-financed attempt to push the Democrat party towards the radical left."

It seems rather strange given rumors that former CIA officials could have been behind the leaks targeting the Trump administration.

"By handing unilateral power to the CIA over its drone strikes at this time, the White House signals that bullying, disloyalty & incompetence pays," Assange tweeted.

By handing unilateral power to the CIA over its drone strikes at this time White House signals that bullying, disloyalty & incompetence pays

Does it mean Trump is in full retreat?

"No," the Wall Street analyst responded, "I think President Trump is merely trying to untie the hands of line operatives, who had been shackled by the Obama Administration's penchant to embrace cumbersome, bureaucratic rules of engagement generally, and in combat zones."

"So far, what I see in President Trump is an attempt to bring common sense management approaches to one of the largest (and least well managed) organizations in the world — the US federal government, with its many departments. To me, it makes eminent sense to set clear objectives with department heads, and then leave these persons with running room to lead their personnel and help them actually meet the objectives. That approach has worked for Mr. Trump in the business sector (and for many others)," Ortel explained.

Hillary Clinton Unwilling to Go Down Without a Fight

© REUTERS / Carlos Barria
#LockHerUp: Hillary Clinton Gradually Losing Veneer of Being 'Too Big to Jail'
Still, it is clear that Hillary Clinton is unwilling to do down without a fight, regardless of her resounding defeat in the US presidential election. The mainstream media continue to drop some big hints about Clinton's thoughts to run for New York mayor.

For its part, the Federal Bureau of Investigation (FBI) is quietly continuing its investigation into Clinton's emails.

The question arises as to why Trump hesitates to deliver on his election promise and appoint a special prosecutor to investigate Hillary Clinton?

"Under our system, career prosecutors and IRS [Internal Revenue Service] officials (at federal level), and their equivalents at the state level, are responsible for moving investigations along, deciding whether to prosecute, and then winning convictions, should they proceed with indictments," Ortel said.

"The 'email' and potential 'pay-to-play' scandals are likely to be far harder to prove, in my opinion, than the solicitation and operating scandals that I see, having looked in detail at public records concerning the many Clinton 'charities'," he explained.

According to the analyst, one general impediment to proceeding has been the slow pace at which the new administration has been able to get its designees confirmed and working in key roles within the Federal Government.

"Here, I am amazed that the Trump Administration has failed to clean house at the Internal Revenue Service, where the Chief and the Head of the Tax-Exempt Organizations Department (the key position overseeing charities) should long ago have been replaced," Ortel highlighted.

"I believe that President Trump may have (correctly) concluded there is no need for a special prosecutor — just let the many rumored investigations proceed," he added.

The Wall Street analyst noted that "across the political spectrum in the US, people on the left and on the right do believe that no one is 'too big to jail'."

"Others have served long prison sentences and paid massive fines over much smaller charity frauds," Ortel, who is conducting a private investigation into the Clinton Foundation, noted.

Why 'Swamp-Dwellers' Continue to Rock the Boat

Observers say that the US President enjoys popular support in the US and that he can rely on the US people. But can the American people's support outweigh the destructive efforts on the part of influential Democratic sponsors?

"In 2017, political parties have much less power than they once did, given the ease, speed, and low cost with which people can communicate with one another," Ortel responded.

On the other hand, he stressed that the US bipartisan establishment has not boasted any substantial achievements in terms of the economy or geopolitics since 1999.

"President Trump and his team are disrupting the one (large) corner of the American  economy that seemed immune to threats posed by powerful and inexpensive technology (to public sector wages) and that, to date, has remained out of effective control," Ortel underscored.

"So, swamp-dwellers in both parties have and will fight hard, because they understand that the swamp, once drained, will not likely get refilled — the DC lobbyists, lawyers, mainstream media, think-tankers, and academia are all threatened," he pointed out.

© REUTERS / Rodrigo Garrido
WikiLeaks founder Julian Assange appears on screen via video link during his participation as a guest panelist in an International Seminar on the 60th anniversary of the college of Journalists of Chile in Santiago, Chile, July 12, 2016

In addition, WikiLeaks' exposures have repeatedly played into the Trump team's hands.

That made Max Boot of the Council on Foreign Relations claim that WikiLeaks, which he called an "anti-American group," has become "the preferred intelligence service for a conspiracy-addled White House."

Do these claims have real grounds?

"If I were a Bernie Sanders supporter, I would have been more than a little upset by the ways in which the Clinton wing of the Democratic party hobbled the Vermont Senator's chances of securing the Presidential nomination. So, I can easily imagine that one or more of those inside the Democratic National Committee (DNC) may have been responsible for the DNC and Podesta leaks last year," the analyst told Sputnik.

As for the latest CIA dump, there are, apparently, many contractors within the agency which are concerned about the mismanagement of the organization's powerful technological tools and the degree to which intelligence officials guard and use sensitive data.

"I imagine there are many contractors who might have decided to send what has come out so far, into the public domain," Ortel noted.

"As for Wikileaks' releases that seem to hurt [Hillary] Clinton and may help Trump, the Clintons have been operating on a national scale since January 1993 and they have inserted numerous allies into the federal and multi-lateral governments. It stands to reason that WikiLeaks (and others) may have much more to mine on the Clintons, than they might have on President Trump and his group of, chiefly, outsiders," the Wall Street analyst elaborated.

Trump May Have Disclosed Classified Information on CIA - US Congressman