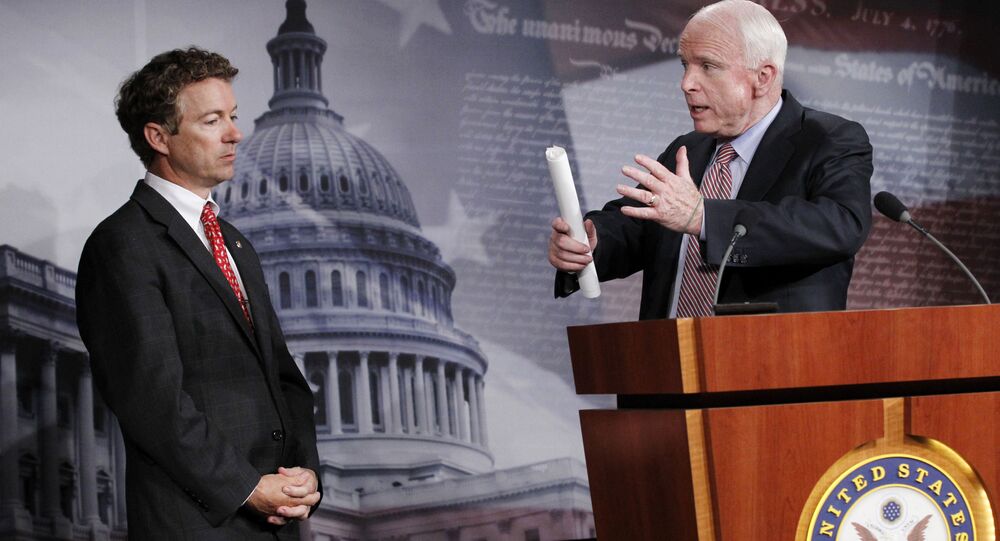 Senator John McCain accused Senator Rand Paul of “working for Vladimir Putin” on Wednesday, after the Kentucky politician blocked consideration of a treaty to allow Montenegro into NATO.

In response, Paul’s chief strategist began mocking the claim by tweeting in Russian.

Paul, an anti-interventionist Libertarian, has long expressed opposition to the US having such a prominent economic position in NATO.

“Currently, the United States has troops in dozens of countries and is actively fighting in Iraq, Syria, Libya and Yemen (with the occasional drone strike in Pakistan),” Paul said in a statement after expressing his opposition to the consideration. “In addition, the United States is pledged to defend 28 countries in NATO. It is unwise to expand the monetary and military obligations of the United States given the burden of our $20 trillion debt.”

© AP Photo / Jacquelyn Martin
Still Lacking Evidence, Senate Holds Hearing on Russian Election Interference
During the hearing, McCain had boldly claimed that anyone who voted against his pet issue was a Kremlin stooge.

“If there’s objection, you are achieving the objectives of Vladimir Putin,” McCain said when he attempted to call the treaty into consideration. “If they object, they are now carrying out the desires and ambitions of Vladimir Putin, and I do not say that lightly.”

Unbothered by McCain’s McCarthyism, Paul stood up, declared “I object,” and promptly walked out of the room without providing any further commentary or response.

“That is really remarkable that a senator, blocking a treaty that is supported by the overwhelming number, perhaps 98 at least of his colleagues, would come to the floor and object, and walk away,” McCain said. “The only conclusion you can draw when he walks away is he has no argument to be made,” he said.

McCain then brought out his favorite accusation to lob at his opponents since Hillary Clinton lost the election.

“The senator from Kentucky is now working for Vladimir Putin,” he said with a straight face.

Doug Stafford, Paul’s chief strategist, took to Twitter shortly after the incident, having a bit of fun and responding to tweets about the incident in Russian.

“It’s none of your business,” Stafford responded – in Russian.

Responding to another tweet about the incident and potential rules McCain may have broken, Stafford declared, “see you in court” – again, writing it in Russian.

© AP Photo / Rick Scuteri
McCain Vows to Push for More Anti-Russian Sanctions in Phone Call With Prankster
The tweet referenced Rule 19, the provision invoked by Republicans who censured Senator Elizabeth Warren during the confirmation hearing for US Attorney General Jeff Sessions in January.

The rule states that senators may not “directly or indirectly, by any form of words impute to another Senator or to other Senators any conduct or motive unworthy or unbecoming a Senator.”

Appearing on morning shows on Thursday, Paul did not hold back, declaring that McCain is “unhinged.”

“One of my favorite articles of that last couple years was one that talked about ‘the angry McCains’ and if we put active troops and got involved in combat where McCain wants us to be … it’s virtually everywhere,” he continued. “So his foreign policy is something that would greatly endanger the United States, greatly overextend us, and there has to be the thought whether or not it’s in our national interest to pledge to get involved with war if Montenegro has an altercation with anyone.”