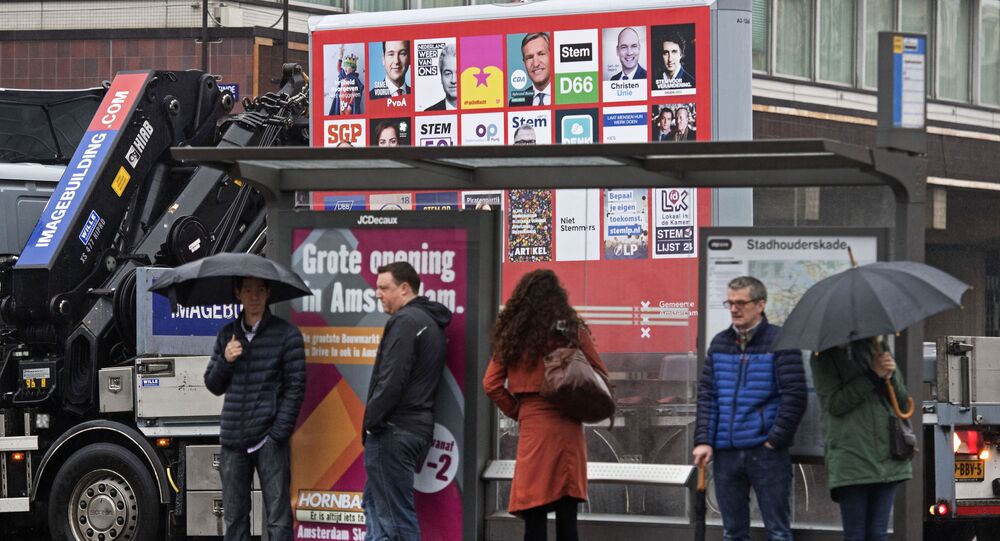 MOSCOW (Sputnik) — The latest data suggests that, with 97 percent of the ballots counted, VVD will have 33 seats in the 150-seat lower chamber, while their main competitors Party for Freedom (PVV) will have 20.

The election was held on Wednesday, the polling station were closed at 9 p.m. local time (20:00 GMT). The turnout at the election was reported to be over 80 percent.

What It Means for Future Government

Prime Minister Mark Rutte and his center-right VVD do not have the majority of 76 or more seats to form the government on their own, but that was not expected to happen in any case.

© REUTERS / Dylan Martinez
EU Shows Solidarity With Netherlands in Dispute With Turkey - Tusk
The Christian Democratic Appeal (CDA) and the centrist Democrats 66 party have 19 seats each so far, and VVD’s partner in the current coalition government, Labour Party (PvdA), gets nine seats.

Far-right PVV has increased its weight in the parliament from 15 seats to 20, but Rutte had already ruled out forming a coalition with them.

VVD had 41 seats in the 2012 election, but having lost eight in Wednesday's vote, it still gets more seats than any other party. PvdA experienced a particularly strong blow as it went from 38 seats to nine, which will not help its chances at the negotiating table where the new coalition government is about to be formed.

The party leaders have already gathered in The Hague for coalition talks.

The Dutch House of Representatives has 150 seats and is responsible for introducing legislation and amendments. The government of the country is formed on the basis of this chamber’s majority.

The election was closely monitored by other countries as it could serve as the bellwether for the upcoming spring presidential vote in France and fall parliamentary vote in Germany. Following the surprising Brexit decision and the victory of Donald Trump in 2016 US presidential election, Europe was waiting for the results of the Dutch vote to gauge the strength of the far-right trend and possible consequences for the European Union.

© REUTERS / Fabrizio Bensch
Europe Hails Dutch Election Result as Good for EU, Blow to Populism
The leader of PVV, Geert Wilders, had been skeptical about the bloc, similarly to French far-right leader Marine Le Pen. The victory of a more pro-European VVD was hailed by many politicians.

"The people of the Netherlands voted overwhelmingly for the values Europe stands for: free and tolerant societies in a prosperous Europe. The result of this election is an inspiration for many," European Commission President Jean-Claude Juncker said in a statement.

German Chancellor Angela Merkel said that she was happy with "a very pro-European result."

The election took place amid the Dutch diplomatic row with Ankara.

© REUTERS / Dylan Martinez
Turkey's Row With Germany, Netherlands: 'It'll Be Difficult to Climb Down From This'
Last Saturday, Dutch authorities refused to let Turkish Foreign Minister Mevlut Cavusoglu's plane land in the country due to alleged security concerns. The authorities also prevented Turkish Family and Social Affairs Minister Fatma Betul Sayan Kaya from entering the Turkish consulate in Rotterdam and had police escort her to Germany. Both ministers had planned to hold a Turkish expat rally at the consulate building in the run up to Turkey's April constitutional referendum. The move sparked a diplomatic standoff, with Turkey promising sanctions and retaliatory measures while barring the Dutch ambassador from returning to Turkey.

On Monday, Ankara halted all high-level political discussions with the Netherlands and barred the Dutch ambassador from returning to Turkey.

Turkish politicians have been attempting to hold meetings with expats in Europe in the run-up to referendum on changes to the Turkish constitution. Several such rallies have been canceled in the Netherlands, Germany, Belgium and Switzerland.

As tensions were rising, Turkish President Recep Tayyip Erdogan compared German and later Dutch authorities with Nazis. The comparison drew criticism from Berlin and Amsterdam. On Sunday, Rutte demanded an apology from Erdogan over the latter’s scathing criticism of the Netherlands in his public speech on Saturday.

Cavusoglu commented on the results of the election saying that there was "no difference between the social democrats and fascist [Geert] Wilders."

According to DutchNews outlet, two Dutch voting aid websites, Kieskompas and Stemwijzer came under attack on Wednesday. The Stemwijzer experienced DDoS attacks, which led to the site crashing.

Both sites reportedly had problems on Tuesday as well and turned to police.

On Wednesday, multiple Twitter accounts of media outlets, organizations and celebrities, including Reuters Japan, Forbes, Germany football club Borussia Dortmund and the UK Department of Health were hacked into and displayed the same message in Turkish with hashtags that meant "Nazi Holland" and "Nazi Germany."

Rutte and VVD planned a party to be held after the election was over, which, according to organizers, would welcome about 800 guests, including journalists.

© REUTERS / Murat Cetinmuhurdar/Presidential Palace/Handout
Erdogan Will 'Push It to the Brink' in Duel With Dutch, Upset Over Dead EU Deal
Initially, Sputnik received an approval for their accreditation and a confirmation, but on March 14, on the eve of the event, VVD’s press service suddenly refused accreditation to Sputnik correspondents, citing lack of seats.

The press service informed correspondents of Sputnik Deutschland and Sputnik France that over 300 journalists had registered for the event which exceeded the party’s press center’s capacity.

Sputnik asked Rutte’s team which media outlets were excluded from the guest list and whether that decision was politically motivated, but has not received a reply yet.