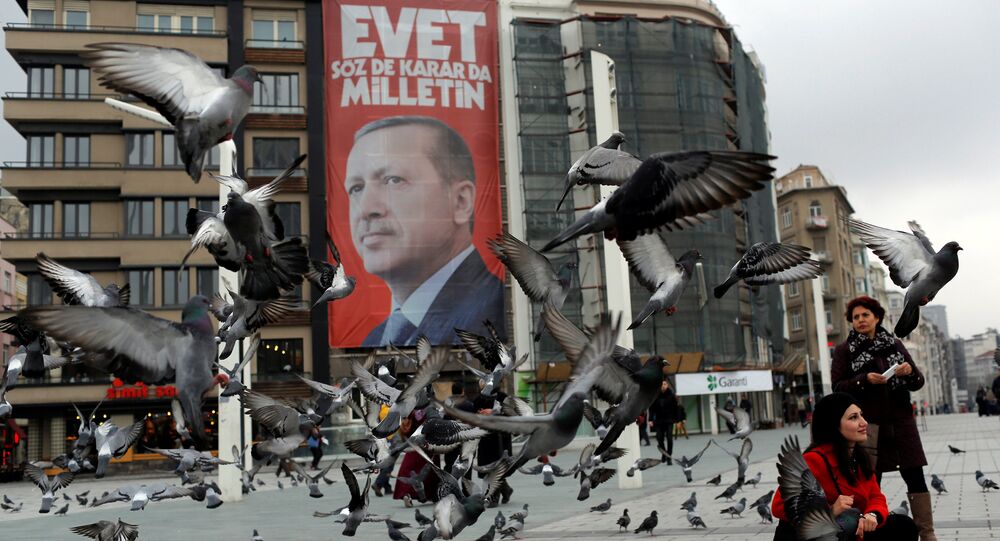 Commenting on the mounting tensions between Turkey and the European Union, after several European countries banned Turkish politicians, including the foreign minister, from holding rallies, Turkish political analyst Muhittin Ataman told Sputnik Turkiye that it is a real chance for Ankara to "escape from the EU's embrace."

© REUTERS / Murad Sezer
German Turks as Decisive Factor: Why Erdogan is in Dire Need of His Compatriots
Turkey-EU tensions are running high after several European countries prevented Turkish politicians, including Foreign Minister Mevlut Cavusoglu, from holding rallies intended to drum up support for Turkey's constitutional referendum on switching to a presidential system of governance.

The relations between Berlin and Ankara became strained as authorities in several German cities, including Hamburg and Gaggenau, canceled Ankara's pre-referendum rallies. A number of high-ranking Turkish officials planned to head the rallies among Turkish communities abroad in theirs efforts to secure support for national constitutional reform which would extend Erdogan's presidential powers.

In response to the ban on the rallies, Turkish President Recep Tayyip Erdogan compared German authorities to Nazis.

The row escalated further after the Dutch government banned a rally in Rotterdam at the weekend, fearing that tensions in Turkey over the referendum could spill over to its expatriate Turkish community. The Netherlands prevented Turkish Foreign Minister Mevlüt Cavusoglu's plane from landing in the country on Saturday, citing security concerns.

Sputnik Turkiye sat down with Turkish political analyst Muhittin Ataman to talk on the issue.

"What we are seeing right now is a collapse of the integration and multiculturalism project, which the concept of a unified Europe has been built around since the end of the Second World War," he told Sputnik.

The European countries, he further explained, have been united by the idea of political and economic stability, which looked attractive to many. The idea of Turkey's accession to the EU was also the result of Ankara's interest in the same stability.

In other words, Ataman explained, Turkey, in striving to achieve economic prosperity, political stability and democratization, attempted to become part of the EU, one of the easiest ways to achieve the above.

However current events demonstrate that the EU, unfortunately, stands far away from this ideal.

© AP Photo / Burhan Ozbilici
Austrian Foreign Minister Urges to End EU Entry Talks With Turkey
The political analyst noted that thanks to the economic growth which Turkey has been demonstrating for the last 15 years since the end of the Cold War, his home country is now pursuing an independent policy.

"We see that with the strengthening of the policies which are focused on Turkey's national interests, the attitude of the EU countries towards Turkey has started to cool down. The EU wanted Ankara to be content with the role assigned to it by Brussels," he told Sputnik.

When it has not happened, he said, and Turkey started pursuing its independent policy, it created tensions and has further grown into a fully-fledged crisis between Ankara and the EU.

The EU, he said, started regarding Turkey's actions in the region as a crack-down on its own interests.

"We see that Turkey, which tried to pursue policies in concordance with its own national interests, has become a competing party to Europe. It has not got the EU's support in the crisis in the Middle East, in the refugee crisis and in the Syrian conflict. On the contrary, the EU has been acting against Turkey in Ankara's fight against terrorism," he told Sputnik.

With this in mind, the political analyst said, Europe's persistent attempt to make Turkey follow an EU friendly path should be understood by the reaction which it generated within Turkey.

© AP Photo /
Why Erdogan is Likely to Put His Threat Into Action and Rip Refugee Deal Up
European countries, he said, have been evidently abandoning their democratic values. Thus, the crisis in the relationship between Turkey and the EU is a reflection of the crisis within the European Union.

The normalization of Turkish-Russian relations after the recent crisis would give Ankara a chance to "escape from the EU's embrace."

The political analyst further noted that the EU is pursuing the very same policies towards Russia, its politics and economy, which are clearly seen in the example of the Ukrainian crisis.

"By developing its relationship with Russia, Turkey is getting a chance to re-distribute the pressure exerted on it. And this puts the Europeans out of temper even further, as in such a situation they are unable to force Turkey to act in favor of the EU," he finally stated.