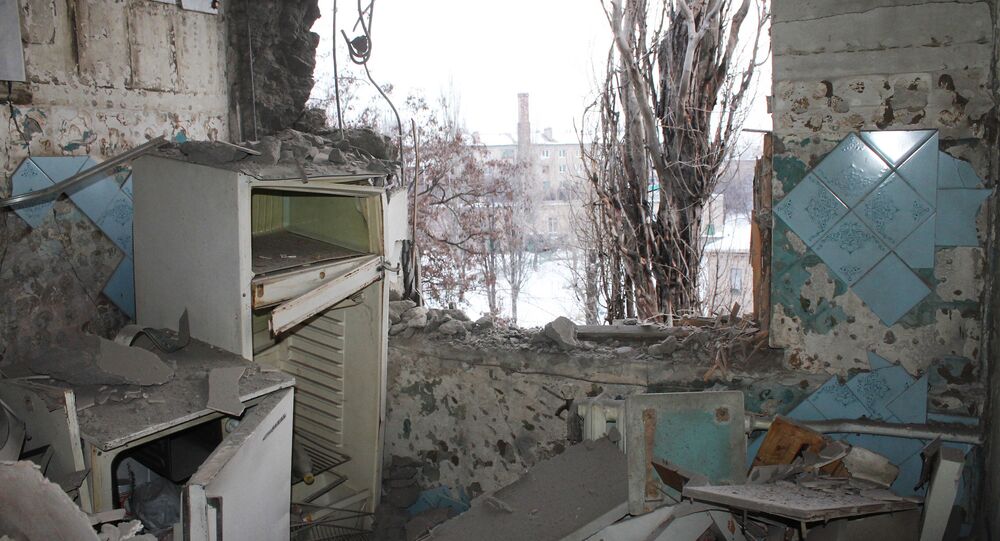 Moscow is concerned about the decision of the National Security and Defense Council of Ukraine (NSDCU) to introduce a complete transport blockade of Donbass and urges Kiev to avoid bringing the situation to humanitarian catastrophe, the Russian Foreign Ministry said Wednesday.

MOSCOW (Sputnik) —According to the ministry, by doing so, Kiev is trying "to shift responsibility" for the current aggravation of the situation on the line of contact, which was also "provoked by Ukraine."

"Moscow is concerned about the decision by the NSDCU taken on March 15 to halt cargo and transport traffic with Donbass… We call on the Ukrainian leadership to avoid bringing the situation to humanitarian catastrophe and finally start to rigorously implement own obligations regarding a complex of measures on restoration of social and economic ties with Donbass," the statement read.

© Photo : YouTube/Golos UA
What's Behind Ukraine's Decision to Cancel Cargo Movement at Donbass Contact Line
Authorities in the self-proclaimed Donetsk and Lugansk People’s Republics took over control of all Ukrainian enterprises in Donbass earlier this year after Ukrainian military vets and lawmakers blocked freight rail traffic from eastern territories. Ukrainian President Petro Poroshenko responded on Tuesday by suggesting that all traffic to and from militia-held areas be halted. The decision took effect on Wednesday at 11:00 GMT.

On March 1, the self-proclaimed republics of Donbass decided to impose the receivership regime on Ukrainian enterprises in the area in response to the transport blockade of railway tracks.

"The authorities of the self-proclaimed Donetsk and Lugansk People’s Republics had to take responsibility for these enterprises and the fate of people working there in an effort to prevent their devastation and destruction… Kiev, indulging extremists, who had blocked the railway traffic with the region, created itself the artificial problems for normal functioning of these economic objects," the ministry added.