The first day of the third round of the settlement negotiations between the Syrian government and armed opposition groups has been overshadowed by the decision of opposition not to participate in the talks, making it harder to complete a map of terrorists' presence in Syria.

MOSCOW (Sputnik) — Speaking about the outcome of the first day of the negotiations, Alexander Lavrentyev, the head of Russia's delegation to the talks, said the delegations that had arrived in the Kazakh capital had already been involved in numerous consultations. 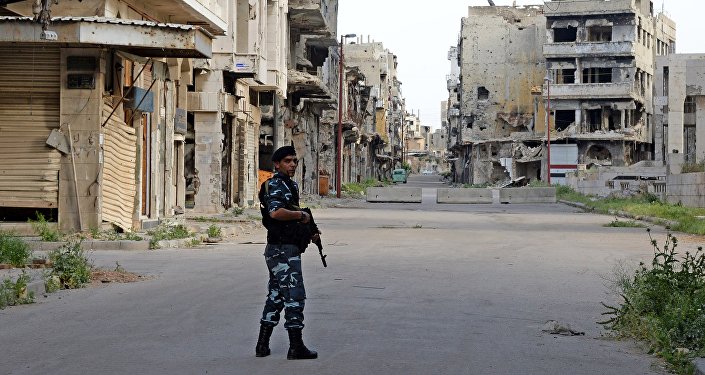 © Sputnik / Mikhail Voskresenskiy
First Group of Militants to Leave Last Bastion in Syria's Homs on March 18
The agenda of the third round of the talks in Astana presupposed that the delegations of the Syrian authorities and armed opposition as well as the international mediators, such as Russia, Turkey and Iran would focus on the map of terrorists' presence in the war-torn state.

However, earlier on Tuesday, the delegation’s representative, Osama Abu Zeid, told Sputnik that the armed opposition decided not to participate in the round of Astana talks.

Later in the day, the head of the Syrian armed opposition delegation at the first two rounds of Astana talks on Syrian settlement, Mohammed Alloush, confirmed the statement of Abu Zeid.

"By our statement and absence we want to show the world that Russians are proclaiming political resolution only in media. They have to change their policy, if they want a solution," Alloush said on his Twitter account.

According to the official, the decision was made in the context of several issues, such as relocation of people from the al-Waer neighborhood of the Homs city, which is the only area in the city controlled by militants, as well as continuation of airstrikes and clashes in several areas of Syria, such as East Ghouta near Damascus.

Commenting on the issue, Russian Foreign Minister Sergey Lavrov said that there were grounds to believe that there was some misunderstanding.

"We are currently working with our colleagues from the defense ministry on the latest news, and we assume that the reasons that were mentioned in the media, at least, as those preventing the Syrian armed opposition from taking part in a new round of talks in Astana are not convincing… We have grounds to believe that there is some misunderstanding," Lavrov told a press conference.

© AFP 2019 / Kirill KUDRYAVTSEV
Russia, Iran, Turkey Holding Consultations at Astana Talks on Syria
The Syrian government delegation led by Bashar Jaafari was not concerned about the Syrian armed opposition's decision to not participate in the Astana-3 talks and expressed hope for their positive outcome.

"We sincerely wish the Astana track to be fruitful and to lead to an island of security that will serve Syrian people's interest, regardless of Syrian opposition presence. We have arrived here not to meet with the representatives of armed groups but to meet with two guarantor states — Iran and Russia… [The armed opposition's] participation is out of our concern," Jaafari told reporters.

According to the Syrian government negotiator, the opposition's move proves that it is weak and not independent.

"The opposition's decision not to participate indicates its weakness and the lack of independence. The decision, whether to participate or not is a political one. It is made not by the opposition, but by its patrons. Secondly, it is the matter of concern of the three guarantor states and when one of the guarantors is not fulfilling its commitments, I mean Turkey, then we have to ask Turkey about the participation of these groups," Jaafari said.

According to the Kazakh Foreign Ministry, the schedule of the negotiations included preliminary consultations on Tuesday and a plenary session on Wednesday. On Tuesday, the Russian delegation met with their Syrian counterparts as well as with the delegations from the United Nations and Jordan. The trilateral talks between Ankara, Moscow and Tehran had also taken place in the Kazakh capital.

"Indeed there are many issues aside from the cessation of the hostilities, these are the various aspects of monitoring this regime, these are the issues of elaboration of some mechanism to punish the violators. Another interesting issue raised by the Russian side is the establishment of a working group to exchange the detainees held by the conflicting side," Lavrentyev told reporters.

© Sputnik / Michael Alaeddin
Syria Talks Members Preparing Doc on Int'l Cooperation on Demining Palmyra
He added that the Russian side had also raised the issue of the opposition delegation's absence during the consultations with the Turkish representatives at the talks.

"This issue was raised directly with the Turkish side regarding the issues as to why the Syrian armed opposition did not arrive at the talks. Turkey is a guarantor state of fulfilling of the obligations adopted by the Syrian opposition in accordance with the agreement on December 29, 2016, but it is not a guarantor of one of the sides refusing to attend a meeting for one reason or another," Lavrentyev told a press conference.

According to the official, there is no need to focus attention on the absence of the delegation, adding that Russia did not see any possible complications for the Geneva talks on Syria due to the decision of the armed opposition.

"There is progress, it was there at Astana-1 and Astana-2 too as well. Even now, despite the absence of the Syrian armed opposition, the work on many documents continues rather effectively," the official said.

However, a source told Sputnik that the talks could be extended as the delegation of the opposition could arrive in the Kazakh capital Wednesday morning.

"Yes, they could be [extended]. We were informed that they could arrive in the morning, then they will be extended," the source said.

© REUTERS / Omar Sanadiki
EU Looking for Partners in Mideast for Reconstruction of Syria After War
According to a source in Russia's delegation to the talks, the presence of the opposition was important, because "without the opposition, no document on separating terrorists [from the armed groups] can be signed."

A source in the Russian delegation also told Sputnik that a paper on international cooperation in demining the ancient Syria's city of Palmyra could be adopted during the third round of talks. However, yet another source in one of the delegations to the Astana negotiations told Sputnik that it would be not an agreement, but an appeal to the United Nations on the issue.

"This is not an agreement, this is an appeal to the United Nations, to all the countries in the world to assist with demining, allocate money. Such a question cannot be resolved in one-two days," the source said.

Kazakh Foreign Minister Kairat Abdrakhmanov said that Kazakhstan was ready to provide the platform for the Syrian settlement talks in Astana if the guarantor countries of the Syrian ceasefire, Russia, Iran and Turkey, ask to prologue the negotiations.

Syrian Armed Opposition Not to Participate in Astana-3 Talks – Rep.