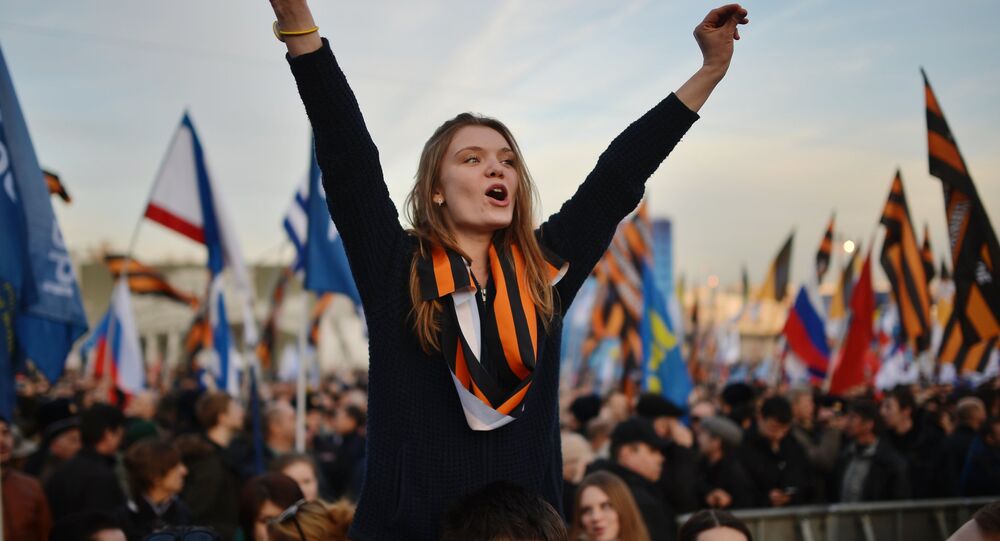 The Crimeans "really wanted to return to Russia," head of the Republic of Crimea Sergey Aksyonov told Sputnik, reflecting on events which led the Black Sea peninsula to hold a referendum on its status within Ukraine.

© Sputnik / Sergey Malgavko
Crimean Top Official on Poroshenko's Promise of 'Support': 'Just Leave Us Alone'
Crimea's parliament and the local government of Sevastopol held the plebiscite following the foreign-sponsored coup which ousted Ukrainian President Viktor Yanukovich in February 2014. "At that point in time, Aksyonov recalled, "Crimeans made a decision which was backed by Russia and the Russian president to return home."

The referendum was held on March 16, 2014, with nearly 97 percent voting in favor of joining Russia.

Aksyonov's brightest memory of that turbulent period in the history of the peninsula is the popular enthusiasm with which historic change was brought about.

"I remember only one thing – the warm attitude of the Crimeans, their wish, their enthusiasm which led us essentially to victory and to returning home. This is why perhaps the main achievement is the feelings of optimism and euphoria. It's hard to remember a time when people were as excited and gleeful as they were after the referendum was held and its outcome announced. We did not believe that anything like this was possible, that there is another memorable date except for May 9 that could spark such emotions," he said.

Aksyonov referred to Crimea's peaceful and democratic reunification with Russia as "a team victory."

"I was merely fortunate to lead this process, but everyone was involved. We were working at such a fast pace that there were people whose surnames we did not know because people were coming from different cities. Every decision was made in one or two minutes. We did not have the time to think or hesitate. It turned out that this was our best card," he said. "No one expected us to swiftly create a truly efficient system that could hold a referendum according to the laws which did not violate Ukrainian laws and were consistent with international norms."

In Aksyonov's view, the main outcome in the three years since Crimea reunited with Russia is the fact that "we have preserved peace and respect towards each other, as well as national consent and calm in Crimea and the city of Sevastopol." Crimea today is a "far cry" compared to the times when the Black Sea peninsula was part of Ukraine, he noted. "All the positive changes are clearly visible."

© AFP 2020 / SAUL LOEB
'Worry About Daesh': Russian Senator Responds to US UN Envoy's Remark on Crimea
This is not to say that there have been no challenges. Aksyonov mentioned that there were major issues when it came to water and energy supplies, but said that they have largely been tackled.

"I agree with Crimeans who criticize local authorities for inefficient and inconsistent efforts in specific areas," he noted. "We have no objections. We understand this. But carrying out so many changes in the situation that we were in… No one in the world has experienced anything like this in terms of adapting to and switching to a legislative environment, replacing currency and so on. However, our opponents and those who don't mean well to Crimea have accused us of doing nothing. For our part, we have probably never been harder on ourselves than we are now."