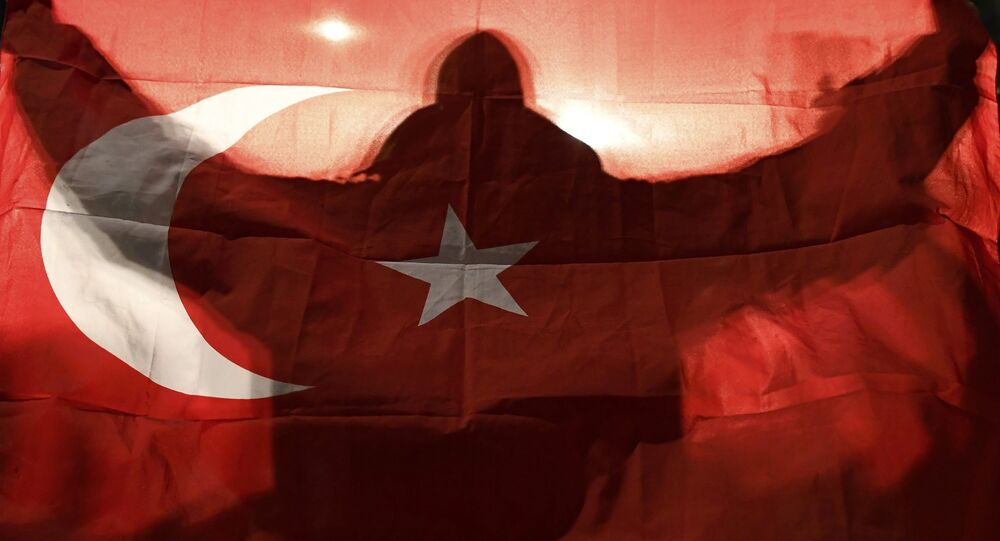 President Recep Tayyip Erdogan has accused Germany and the Netherlands of "Nazism" and "fascism" after European leaders prevented Turkish officials from taking part in Ankara-backed rallies. Political analyst Bill Park told Radio Sputnik that it will be a challenge to ease tensions between Turkey and Europe.

"It's unfortunate that things have come to the point that each side is demanding an apology from the other. And I don't think that either side is going to get it. So the consequence of that is that it is going to be very difficult for each side to climb down from this. But ultimately Turkey cannot demand that it holds divisive government rallies on other people's territories. And it must expect that there will be consequences if it accuses countries like the Netherlands, Germany or Austria of being Nazi and fascist," he asserted.

Erdogan and his supporters have staged rallies at home and abroad in a bid to convince voters to back proposed amendments to the constitution designed to grant sweeping powers to the presidency. Several European countries cancelled some of these events or prevented Turkish officials from taking part in them, much to Ankara's discontent.

© AP Photo / Axel Schmidt,file
Erdogan: 'Dear Merkel, You Are Supporting Terrorists!'
Over the weekend Turkish Foreign Minister Mevlut Cavusoglu and Family Minister Fatma Betul Sayan Kaya were not allowed to address Turkish voters in the Netherlands, prompting Erdogan to accuse the Dutch of being "cowards, remnants of Nazis" and "fascists."

Park, a senior lecturer at the Department of Defense Studies at King's College London, described such remarks as "off the wall" and "quite extreme."

"To accuse Holland … and this German government of being Nazi is just ridiculous. What the Dutch, the Germans, Austrians and others are saying is that Turkey seems bent on introducing its own political divisions into the domestic political space of the European Union countries. No country has the right to do that," he said.

In Park's opinion, European countries "are within their rights" to stand against such rallies.

Some have suggested that both Turkey and the Netherlands could benefit from the row due to upcoming key votes in both countries, but the analyst was skeptical that this was the case.

© REUTERS / Yves Herman
What's Behind Erdogan Accusing European Countries of 'Fascism'
"I am never sure whether Erdogan is calculating or whether he is as impulsive as he sometimes appears. There is speculation that is probably well-grounded that he might increase his vote by a couple of [percentage points] by arousing domestic political anger in Turkey," he said.

Park said that these developments will probably not affect Prime Minster Mark Rutte's People's Party for Freedom and Democracy or its main opponent, the right-wing Party for Freedom, led by Geert Wilders as they head toward elections scheduled to be held on March 15. He added that the row will have an impact on Turkey's ties with the European Union.

"I don't suppose this is going to do Prime Minister [Mark Rutte] any harm and it probably is not going to do Geert Wilders any harm either. But measured against that will be the impact on not just the Turkish-Dutch relationship, but Turkey-EU relations," he said. "What I don't think is that the Dutch or the Germans are engaged in this argument with Turkey just to win votes domestically."