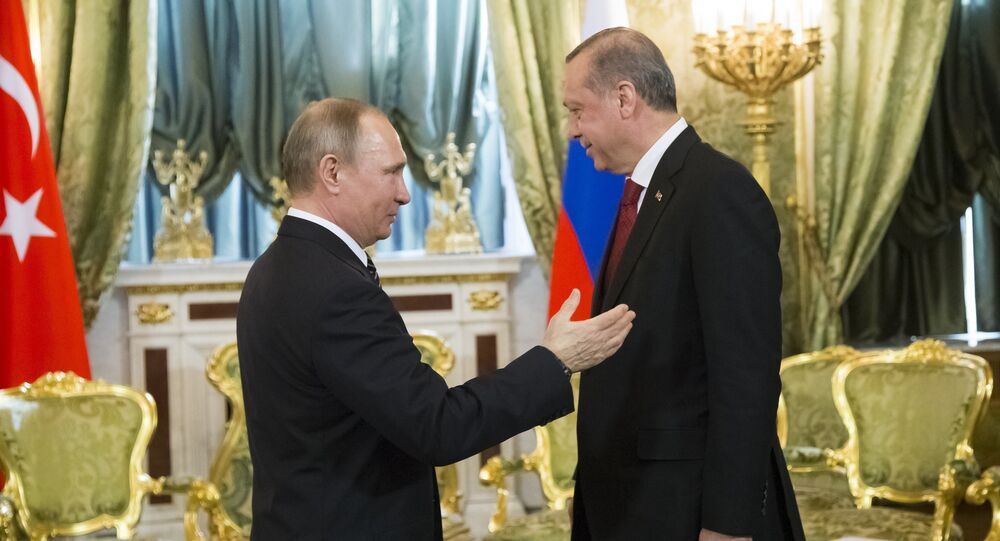 'Two Halves of an Apple': Russia and Turkey Usher in New Era of Relations

Russian President Vladimir Putin and his Turkish counterpart Recep Tayyip Erdogan have ushered in a new era in the bilateral relationship, signing a new trade, economic, scientific, technical and cultural cooperation program, as well as a deal on creating a joint investment fund during a meeting held in Moscow on March 10.

In an interview with Sputnik Turkey, Recai Berber, the head of the Turkey-Russia interparliamentary friendship group at the Grand National Assembly, mentioned that Russian and Turkish officials have agreed that relations between the two countries have been fully restored.

"I have always said that Russia and Turkey resemble two halves of an apple. These countries need each other and complement each other. We can provide Russia with what it needs and receive from it what we lack, primarily energy resources. I am convinced that natural cooperation between the two countries will continue to develop, following its own path. High-profile visits are significant in this respect," he said.

Berber said that the agreement on establishing an investment fund was of particular importance.

© Sputnik / Sergey Guneev
Moscow 'Can't Satisfy' Erdogan's Ambitions on Kurdish Issue
"There are major investment projects that Russia is trying to carry out with Turkey, including the construction of a nuclear power plant and pipelines. These projects require funding. Both Turkish and Russian funds need to take part in this. This is why the recent agreement is an attempt to improve the mechanism of financing joint megaprojects by using assets of both countries," he explained.

The Turkish Stream, unveiled in 2014, is a natural gas pipeline that is supposed to link Russia's Krasnodar Region with East Thrace in Turkey across the Black Sea.

© AP Photo / Alexander Zemlianichenko
Small Victories, Grand Expectations: What's Behind Erdogan's Trip to Moscow
Berber mentioned that the joint investment fund will be launched after teams from both countries finalize details of the agreement. For his part, Aydin Sezer, who heads the Center for Turkish and Russian Studies, said that the joint investment fund is expected to be worth up to $1 billion.

"I think that this is a significant agreement from the point of view of investing in projects carried out in both countries, but also beyond," he told Sputnik.

Berber also said that the visa issue could be resolved in the near future. This will be a positive development for tourism, a sector badly hit by the fall out between Russia and Turkey after Ankara downed a Russian aircraft in northern Syria in November 2015.

© Sputnik / Alexei Druzhinin
'Normalization Completed'? What Erdogan Wants From Moscow
Agricultural goods were also on the agenda. Berber noted that Moscow partially lifted the food ban, but some products that Turkey used to export to Russia are still blacklisted. These include tomatoes and grapes.

"The Turkish delegation has urged [Russia] to lift economic sanctions on these agricultural goods as soon as possible. Clearly, major efforts with regard to this will be carried out in the near future. I think that substantial changes could take place in less than a month," he asserted.