BERLIN (Sputnik) — According to Seibert, German Chancellor Angela Merkel’s earlier calls on Turkey to refrain from such remarks concern statements made against not only Germany, but other EU member states as well. 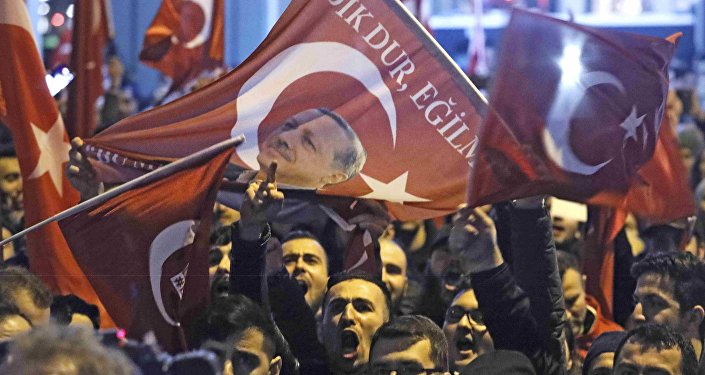 "The Netherlands has suffered greatly because of the National Socialism regime and comparing them today to such ideology is unacceptable," Seibert said at a press briefing, adding that "such wordings against our closest partner and friend must stop."

Ahead of his planned Turkish expat rally at the embassy prior to the referendum on the constitutional changes, Turkish Foreign Minister Mevlut Cavusoglu was barred from landing by Dutch authorities on Saturday over "security concerns." Turkish President Recep Tayyip Erdogan labeled the Dutch authorities' behavior as "Nazism."

On the same day, Turkish Family and Social Affairs Minister Fatma Betul Sayan Kaya was denied entry into the Turkish consulate in Rotterdam. She was declared an "undesirable alien" and then deported to Germany. Both Dutch and German authorities have called off the family minister's campaign meetings.

Earlier in March, authorities of several German cities revoked permissions for pre-referendum rallies where a number of Turkish officials, including Cavusoglu, were set to address the Turkish community in the country. Erdogan compared German authorities with Nazis after they had banned Ankara’s campaign rallies. The German government condemned the remarks as unacceptable, unjustifiable and uncalled-for.

Erdogan has been seeking Turkish expats' support of a constitutional change that will increase his political power. The referendum on the amendment is scheduled for April 16.