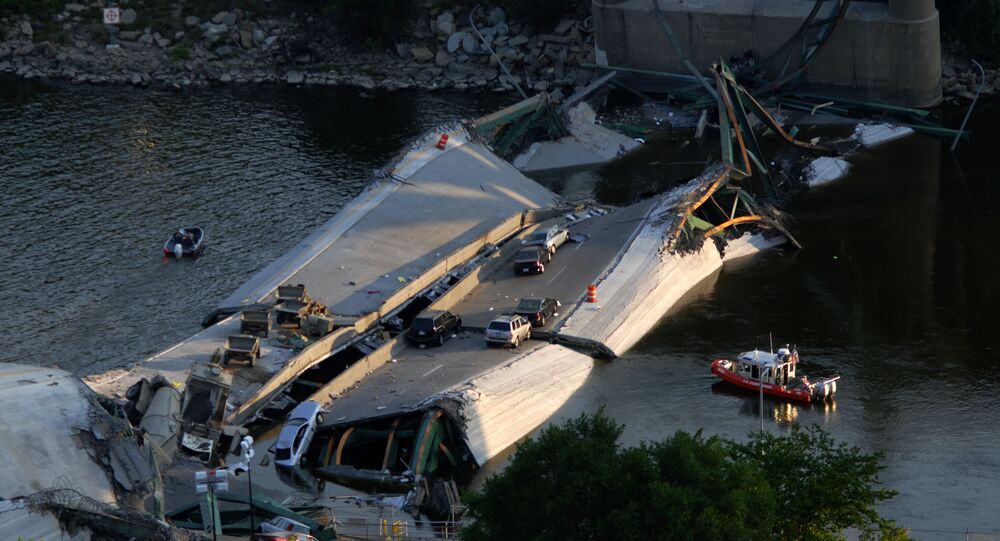 The American Society of Civil Engineers (ASCE) has released a report indicating that it will take $4.59 trillion to improve America’s infrastructure grade from a D+ to a B.

US President Donald Trump has expressed desire to implement a $1-trillion infrastructure build-out as part of White House Chief Strategists Steve Bannon’s ‘economic nationalism’ doctrine. But according to one of the most expert groups on the topic, that might be less than 25 percent of the investment required to get American bridges, roads, tunnels, dams, and waterways up to par.

As of 2016, America has 614,387 bridges supporting transportation of goods and travelers. A whopping 56,007 of those bridges, or almost one in ten, are rated as "structurally deficient," ASCE noted.These bridges "are not unsafe," but could become dangerous and need to be closed if rehabilitation and "substantial" improvements are not made, according to the group.

Water, which makes up about 66 percent of the human body, has been a tragic issue in places like Flint, Michigan, where lead was discovered to have contaminated the water supply in 2014. What’s more, not only are local and federal governments failing to provide solutions to Flint residents, the state actually rolled back a subsidy which helped reduce the cost of water bills for those in the city, according to a PBS report. Residents can only drink out of the tap when a filter is applied.

Exposure to lead is associated with anemia, weakness, and kidney and brain damage, according to the Centers for Disease Control and Prevention. Lead’s toxicity also probably causes cancer in humans, according to a slew of agencies, including the Environmental Protection Agency, the Department of Health and Human Services, and the International Agency for Research on Cancer.

Reasons to be skeptical

There are reasons to be skeptical, as engineers endorsing the report card comprise the main group set to benefit from higher infrastructure spending. The "incremental increase in interstate natural gas pipeline expansion is modest, relative to historical capital additions," according to a report from the Office of Energy Policy and Systems Analysis. "Similarly," the report adds, capital investment required for interstate energy pipelines is predicted to be "significantly less" than capital expenditures "associated with infrastructure over the last 15 years." In other words, less investment may be required for energy pipelines to meet expected levels of demand.

Economists have argued that spending "shocks" to highway infrastructure budgets may only provide temporary benefits, a 2012 working paper from the National Bureau of Economic Research notes. Shocks to highway funding have a "positive effect on local GDP both on impact and 6 to 8 years after," however, 10 years following the shock, "we find no permanent effect," according to researchers Sylvian Leduc and Daniel Wilson.

After Daesh: Rebuilding of Palmyra’s Infrastructure to Take Up to Two Months