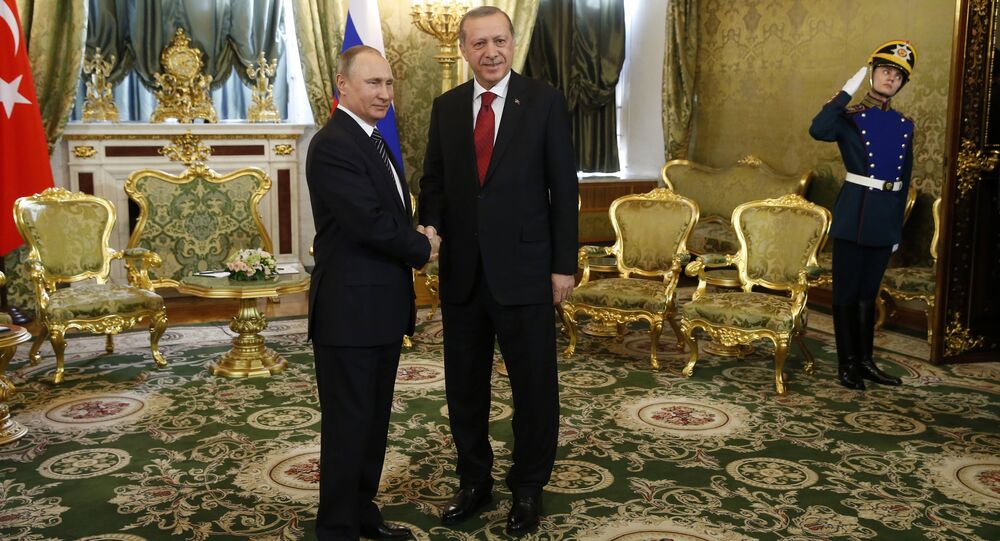 Vladimir Putin noted the fast recovery of relations between Russia and Turkey.

"We are very much pleased that our interstate ties are being restored at a very fast pace… Trade and economic relations are also being restored. Yesterday, Russian Prime Minister Dmitry Medvedev informed his Turkish counterpart about additional measures and steps aimed at restoration of our economic relations in the full-format mode," Putin said opening talks with Turkish President Recep Tayyip Erdogan.

Russia and Turkey are actively working to resolve crises in the world, including in Syria, according to Putin.

"We are actively working to resolve the most acute crises in the world, first of all, of course, in Syria," Putin said. "I am very much pleased to note that… such confidential and very effective contact is being established between the military departments and special services."

After a long period of dynamic development, bilateral cooperation went downhill after the Turkish Air Force downed a Russian military aircraft in the Syrian air space on November 24, 2015. For seven months bilateral ties were virtually frozen. In June 2016 in a message to the Russian president the Turkish president expressed his desire to normalize relations and apologized for the death of the Russian pilot. Erdogan also emphasized his readiness to do everything for normalizing the traditionally friendly relations between Turkey and Russia, to jointly react to regional crises and to counter terrorism.

© AFP 2020 / ALEXANDER NEMENOV
'If Erdogan Starts Confronting Moscow It Will Bury Turkey'
In 2016, bilateral trade went down compared to 2015. Reduction in imports from Turkey was caused by the restrictions introduced by Russia on trade with Turkey in the end of 2015.