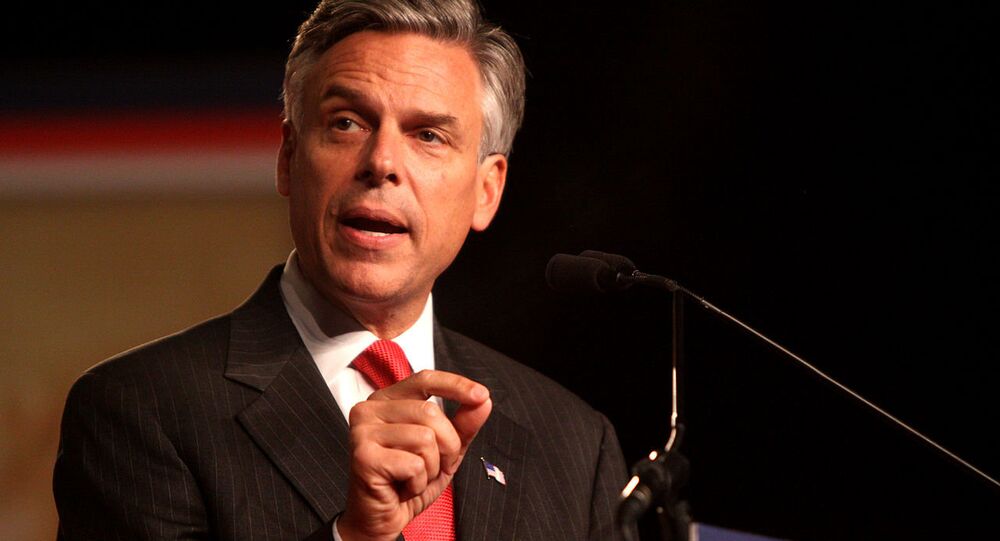 Change of Heart? Trump Ridiculed Russia Envoy Pick When He Was Emissary to China

Former Utah governor and Obama-era ambassador to China Jon Huntsman has accepted Donald Trump's offer to serve as the next US ambassador to Russia. The move may come as a surprise to those who remember Trump's very public quarrel with Huntsman when the former governor was running for president in 2012, but that's only half the story.

On Wednesday, US media reported that Huntsman, who served as governor of Utah between 2005 and 2009, and ambassador to China from 2009-2011, had accepted Trump's offer to be the US ambassador to Russia. Huntsman will now face Senate confirmation hearings amid a Democratic Party-led witch hunt against Trump officials. If confirmed, Huntsman will become the face of US diplomacy in Moscow at a moment of strained relations between Russia and the US.

© AP Photo / Matt Rourke
Ex-Utah Governor Huntsman Offered Position of US Ambassador to Russia
Huntsman's time as ambassador to China was mostly uneventful. One exception took place in February 2011, when the ambassador may have had a Nuland cookies-like moment, and appeared at a protest organized by 'pro-democracy activists' in Beijing who were trying to foment an Arab Spring-like 'Jasmine Revolution' in China. When asked by an onlooker why he was there, Huntsman replied that he was "just here to look around." A spokesman for the US Embassy in Beijing later said that the ambassador's presence was "purely coincidental," and that Huntsman was just "strolling through the area on a family outing" and left soon after finding out what was going on.

A month before the incident, in January 2011, Huntsman submitted his resignation as ambassador to China, effective April 30 of that year. Soon after, the former ambassador returned to the United States and started the process to enter the race for the nomination as the Republican Party's presidential candidate.

Huntsman eventually lost the nomination to Mitt Romney, but not before getting engaged in some intense verbal jousting matches with real estate mogul and future President Donald Trump. During the 2012 race, Trump, who eventually swung his support behind Romney, repeatedly ridiculed the former ambassador on Twitter in the manner he has become famous for, saying Huntsman has "zero chance of getting the nomination," and that "nobody cares about his campaign (or him)."

The lightweight, @JonHuntsman, used my name in a debate for gravitas--it didn't work. Sad!

@JonHuntsman has zero chance of getting the nomination. Whoever said I wanted to meet him? Time is money and I don't waste mine.

"Nobody cares" about the Iowa straw poll is what @JonHuntsman said yesterday. His problem is that nobody cares about his campaign (or him).

Huntsman, for his part, criticized Trump for his lack of courage to run himself, and indicated that he wasn't "going to kiss [Trump's] ring [or] any other part of his anatomy."

In late 2011, in a tweet that's sure to get coverage in the days and weeks to come, Trump called Huntsman a "weak" diplomat, adding that "he was easy pickens" for Beijing. In February 2012 Trump wrote: "John Huntsman called to see me. I said no, he gave away our country to China!"

Our diplomats are weak: @JonHuntsman's China policy proves why we need businesmen to negotiate against China.

China did a major number on us during the reign of @JonHuntsman. He was easy pickens!

Jon Huntsman called to see me. I said no, he gave away our country to China! @JonHuntsman

The last two tweets in particular will surely have the anti-Trump #Russiadidit conspiracy theorists coming out of the woodwork now that Huntsman has been nominated for the post of Russia envoy, with critics assuming that if Huntsman 'gave the US away to China', he might do the same in the case of Russia. The accusations have already begun to fly:

Since I gave American democracy away to Russia, it's only fitting I name Jon Huntsman as US ambassador! #Trumprussia pic.twitter.com/6JjxxBl8HO

trump once criticized Jon Huntsman for giving away U.S. to China. Now he's made him Ambassador to Russia for the same purpose. pic.twitter.com/Rf8BUVevk7

In other venues during the 2012 race, including several appearances on Fox News, Trump called Huntsman an "Obama plant," and complained that his stance on China was "pathetic and so weak," and his attitude toward Beijing "suicidal and terrible."

Following their jousting during the 2012 race, Trump and Huntsman seemed to have patched things up, but not entirely. In early 2016, Huntsman became one of the first moderate Republicans to endorse Trump for President, before bizarrely withdrawing his support in October and suggesting that Trump should drop out of the race after The Washington Post released a video featuring Trump speaking to a television host about woman in "an extremely lewd" manner.

© Sputnik / Alexei Filippov
Kremlin Reveals Main Task of Next US Ambassador to Russia
During the 2016 campaign, Huntsman praised Trump's position on campaign finance reform and the influence of money in politics, as well as his talk of 'draining the swamp' in Washington and starting an infrastructure revitalization program in the US. In December, following Trump's conversation with Taiwan's leader, which broke with the established protocol of the One China Policy, Huntsman praised the President-elect's decision to take the call, saying that Taiwan may prove a "useful leverage point" for Washington in dealing with Beijing.

Trump's decision to tap Huntsman for the post of Russia ambassador has resulted in criticism even from would-be supporters of Trump's presidential campaign-era anti-establishment agenda.

Russian Senator Alexei Pushkov said that he wasn't expecting much from the new ambassador, should he be confirmed, given his chairmanship of the Atlantic Council, a Washington-based international affairs think tank with a firmly anti-Russian position on most issues.

"The candidacy for the US ambassador to Moscow speaks volumes. Huntsman is the head of the Atlantic Council, where harsh criticism of Russia has become the norm. He's definitely not a dove."

Other Twitter users also pointed to Huntsman's 'globalist' connections, including his former membership in the Council on Foreign Relations, his participation in Bilderberg Club meetings in years past, and his support for John McCain during the 2008 presidential race. Users aimed their criticism not only over the Russia post, but over rumors that Huntsman may be appointed for a senior position at the State Department as well.

Jon Huntsman asked #PresidentTrump to STEP DOWN in OCT 2016.
Do NOT hire this disloyal Globalist Elite as State Dept. #2.#TRUMP #MAGA #CFR pic.twitter.com/11UixDJrsP

Ultimately, if his candidacy is confirmed and he steps into the role of ambassador to Russia, only time will tell what role Huntsman will play in the Russian-US relationship, and just how much his behavior will be motivated, influenced or dictated by the White House. However, if his past verbal jousting matches with Trump, his China role, and membership in a number of establishment institutions are anything to go by, most Russian observers will likely be inclined to agree with Senator Pushkov's assessment.

Ex-Utah Governor Huntsman Offered Position of US Ambassador to Russia

A Tough Job to Deal With? Who Will Be New US Ambassador to Russia

Ex-Utah Governor Jon Huntsman Considered for US Ambassador to Russia