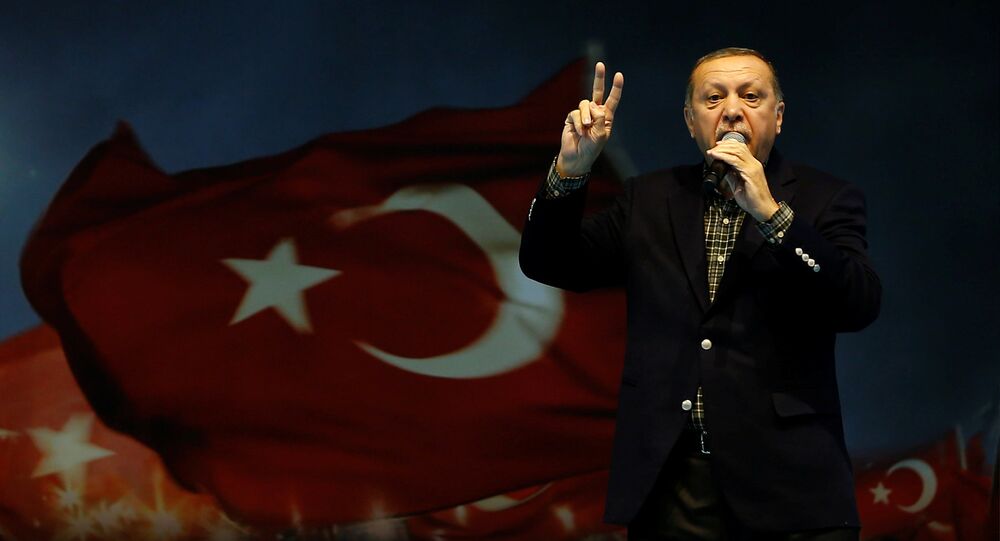 In the follow up to the recent spat between Berlin and Ankara over the cancelled Turkish rallies in Germany, Sputnik Deutschland sat down with Gulistan Gurbey, an expert in Turkish affairs, to talk about why Recep Tayyip Erdogan desperately needs the support of the German Turks and why this Turkish community supports the Turkish president.

© Photo : Pixabay
Erdogan's Nazi Jibe is First Shot in 'War of Words' With Berlin
On March 2, Turkish Justice Minister Bekir Bozdag was supposed to speak at a big public rally organized by the Turkish community in Gaggenau, a southwestern German town.

However, at the last moment, the event was canceled by the Gaggenau municipality, citing possible overcrowding. Then the city of Cologne blocked a similar event amid security concerns.

The move sparked a war of words and a diplomatic flashpoint between the two countries.

Over the weekend, the Turkish president lashed out at Germany, accusing it of "Nazi practices" and threatening to "stir up the world" if he is not let in, or prevented from giving a speech there.

"Now they think Tayyip Erdogan wants to go to Germany. I will go if I want to," the Turkish leader said at a meeting in Istanbul over the weekend.

"If you don’t let me in, or prevent me from giving a speech, then I will stir up the world," he added.

"Germany, you don’t have anything to do with democracy," he went on. "These current practices of yours are no different than the Nazi practices of the past."

Ahead of the upcoming referendum next month, Turkish Justice Minister Bekir Bozdag had been expected to call on Turkish voters living in Germany to back constitutional reforms that would expand the powers of the Turkish President.

Many experts therefore suggested that Recep Tayyip Erdogan is fighting for every vote in support of his reforms.

Sputnik Deutschland sat down with Gulistan Gurbey, an expert in the Turkish affairs at the Free University of Berlin (Freie Universität Berlin) to talk about why the Turkish community in Germany can become a decisive factor in Erdogan's campaign.

"A considerable part of the Turkish community living in Germany is politically conservative which suggests that they have a burning sense of patriotism," she told Sputnik.

Besides, she added, the Turkish Justice and Development Party (AKP), which has been ruling the country since 2002, has had considerable economic success. It has significantly improved living standards and public infrastructure, including in large cities as well, which people feel in their everyday lives.

This, Gurbey said, is also of significance to the Turks residing in Germany, because they maintain close family and emotional ties with their home country.

The expert said that for them, Erdogan embodies a strong hegemonic Turkey, and they like it. This tendency has only intensified in times of uncertainty, such as those following the recent terrorist attacks in Turkey.

© Sputnik / Maksim Blinov
Turkish FM Vows Response to Germany’s 'Unfriendly' Ban of Ministers' Address
Meanwhile, the president demonstrates that he has a strong personality capable of solving any problems. And the Turks residing in Germany can play a decisive role in April on Turkey's constitutional referendum on switching to a presidential system of governance.

The expert also spoke against the ban on the rally of the representatives of the Turkish government, however calling Erdogan's threats to "stir up the world" an intended provocation.

"I am sure that the basic right for the freedom of speech and the freedom of gatherings is impartible and applies to the representatives of the Turkish government as well," she told Sputnik.

Gurbey also noted that this right applies to everyone, even to those who are calling out the "propaganda of an almost autocratic system."

However Germany should not respond with the same undemocratic arguments and methods which Turkey is reproached for, she warned. Germany should set out clearly the conditions for holding these rallies, which it has not done so far.

© CC0 / Pexels
'Unprecedented Arrogance': German Media in Outrage Over Erdogan's 'Nazi' Comment
The expert said that the right to hold rallies should also apply to the Turkish oppositional politicians, to ensure that balance in maintained.

Commenting on the deteriorating Turkish-German relations, she said that these ties are currently in a state of "continuous escalation" which has now reached a new low due to the remarks of the Turkish president about the "Nazi practices." She said that Erdogan "went too far" with this remark, however, surprisingly, it played into his hands as it raised his credibility in the eyes of many Turks living in Germany.

She also noted that such verbal escapades are part of the strategy of the Turkish president.

Berlin and Ankara, she said, are experiencing a "crisis of values". Their opinions about democracies are set apart by a "huge, constantly growing abyss."

Until this crisis is overcome, the relationship between the two countries will experience constant ups and downs, she warned. However neither Germany nor Turkey can afford to destroy the mutual ties, be it in the economic or military sphere. Germany is greatly dependent on Turkey over its refugee crisis, she said, and it should keep it in mind.