Four legal memoranda detailing shortcomings in the Army Corps of Engineer’s review of the controversial Dakota Access Pipeline were quietly removed from the Department of Interior’s website as US President Donald Trump, then newly inaugurated, fast-tracked the pipeline’s completion.

One memo notes that Energy Transfer Partners, the Texas-based company building the pipeline, and the Army Corps of Engineers failed to meet federal requirements in how they communicated with the Cheyenne River and Standing Rock Native American tribes. 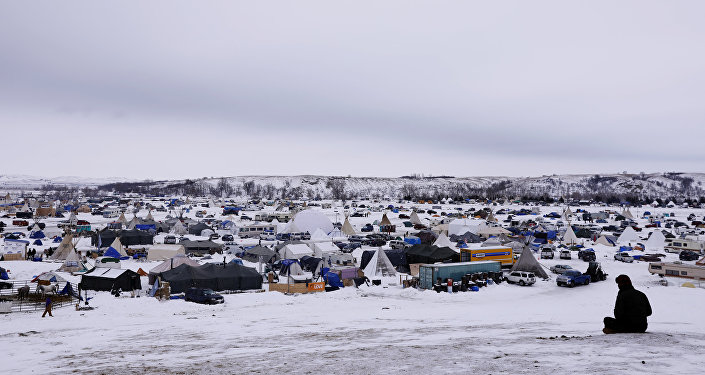 The document indicates that the Corp’s claim of not violating the Standing Rock Reservation by drilling under the Lake Oahe reservoir is contradicted by treaties and court decisions, which would require the kind of consultation with the tribes that the Army Corps has tried to stay away from.

"Both the Standing Rock and Cheyenne River Sioux Tribes have treaty hunting and fishing rights in Lake Oahe, which is located (at least in part) within the boundaries of both Reservations,” the memo reads, “The Tribes additionally retain some proportion of water rights in Lake Oahe. And both Tribes maintain a meaningful historic and cultural connection to the land that was flooded to create the federal floodplains project."

The memo details that the Corp’s environmental assessment "concludes that it is unlikely that a pipeline running underneath the main source of Reservation water will have any effect on either Tribe's Reservation or their residents. This fails to consider the government-to-government relationship with the Tribes and other issues raised above concerning the various environmental statutes applicable to this project."

It also reports that ETP’s claims that "the pipeline will include technology designed to prevent leaks" was accepted by the Corps after only a minimal assessment of the environment, despite the fact that there some 300 pipeline leaks annually in the US.

In late February Jan Hasselman, a lawyer for environmental law firm Earthjustice, condemned the Trump administration’s quashing of the memos, calling them “hugely significant” and pointing out that the documents were "potentially determinative" on the tribe’s legal case against the pipeline.

Hasselman said, "It's more of the same we've seen from this administration — taking thoughtful and considered work and tossing it in the garbage…The Standing Rock Sioux deserve better. That's why we have courts."

According to the Earthjustice website, "The Tribe contacted the Army Corps, even before DAPL applied for permits, to express its deep concerns about the pipeline in this location and its effect on the Tribe’s treaty rights and cultural sites."

Pipeline Leak in US State of Iowa Spills 82,000 Gallons of Diesel Fuel