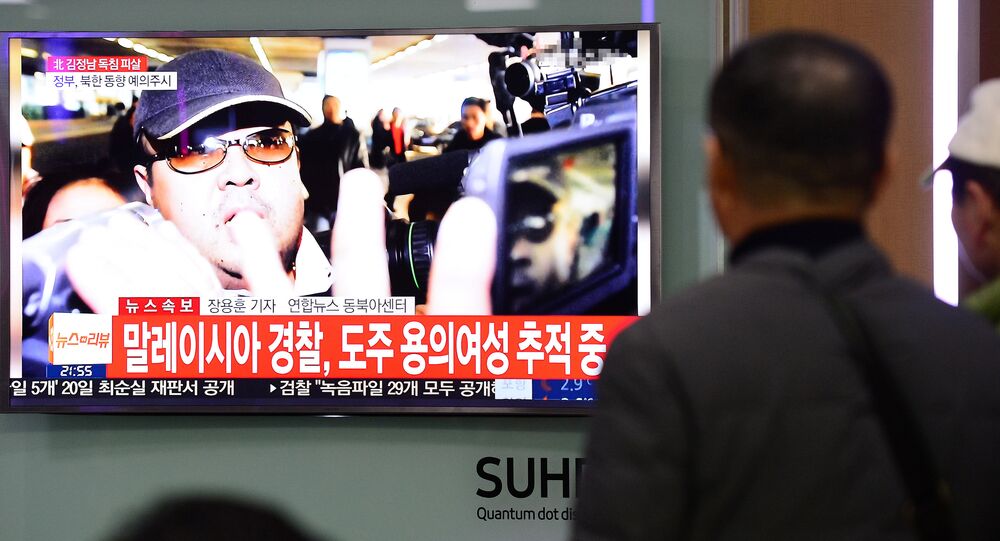 North Korea on Sunday hit out at South Korean Foreign Minister Yun Byung-se, who called for his northern neighbor’s leadership to be punished for its alleged involvement in the murder of its ruler’s exiled half-brother.

© AP Photo / Ahn Young-joon, File
Pyongyang Fires Four Projectiles Into East Sea Amid Seoul-Washington War Games
As Yun addressed the UN Human Rights Council in Geneva last week on Monday, he urged the organization to take action against the regime, claiming that it was responsible for the extrajudicial killings of Kim Jong-nam and many high-ranked North Korean officials.

On the next day, in a speech before the UN-backed Conference on Disarmament, the minister accused Pyongyang of using the internationally banned VX nerve agent to carry out the assassination. He claimed that North Korea produced and stockpiled various chemical weapons and proposed stripping the state of its UN membership

"It is a groundless slander and fabrication. Those who are plotting biochemical warfare and posing biochemical weapons threats on us is none other than the US and the South Korean puppet regime," the website wrote.

"[South Korea] may be forced to pay its price and Yun Byung-se and its conservative puppet group will see its fate doomed soon."

© Photo : Driedprawns
South Korea Quadruples Cash Rewards for North Korean Defectors
Kim Jong-nam, 45-year old half-brother to North Korean leader Kim Jong-un, was allegedly murdered at a Kuala Lumpur airport on Feb. 13 by two women who were caught on CCTV smearing the man's face with a cloth 20 minutes before he died from a seizure.The women say they were only told they were playing a harmless prank.

According to local police, swabs of Kim's face revealed traces of VX nerve agent, which is classed as a weapon of mass destruction.

After North Korean Ambassador to Malaysia Kang Chol said that North Korea "couldn't trust" the investigation and refused to apologize for this and other inflammatory statements, Malaysia declared the diplomat persona non grata and gave him 48 hours to leave the country.

"I think we have given a clear message to the North Korean government that we are serious about solving this problem and we do not want [the investigation] to be manipulated,'' Deputy Prime Minister Ahmad Zahid Hamidi was quoted as saying Sunday by Malaysian national news agency Bernama.

Pyongyang has denied any role in the assassination and denies stockpiling chemical weapons.