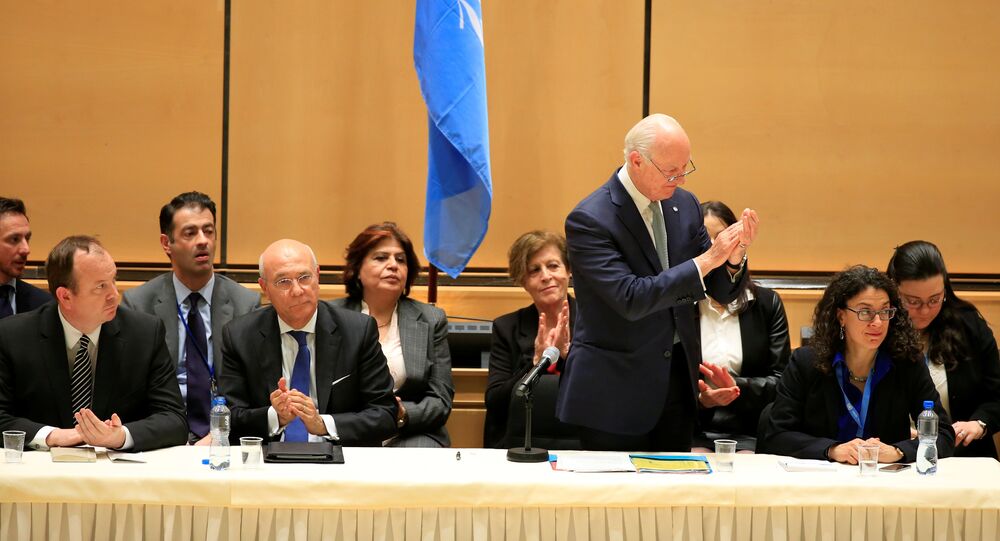 Moscow supports the participation of Astana platform, the Kurds and other representatives of Syrian moderate opposition in intra-Syrian talks, Russian envoy to the UN Office in Geneva Alexey Borodavkin said Saturday.

GENEVA (Sputnik) — Borodavkin noted that the reunification of these groups should happen not through "Riyadh-based delegation absorbing" them, but by bridging the distance between the positions of all the opposition platforms.

"Riyadh [High Negotiations Committee], Moscow or Cairo opposition platforms put together do not show the full range of the Syrian opposition. We regret that the Kurds, the Astana platform and other moderate opposition groups were not invited to this round [of talks]," Borodavkin told reporters.

© AFP 2020 / Kirill KUDRYAVTSEV
Syria Peace Talks Should Be Direct, Include Kurds - Russian Envoy to UN
Earlier, Borodavkin said that Moscow pushes for inviting Syrian Kurds to participate in the intra-Syrian talks in the Swiss city of Geneva. Syrian Kurds are Syria’s citizens, they represent a numerous minority, great political and military force and they have the right to take part in shaping the state’s destiny, Borodavkin stressed.

The Kurds did not attend February 2016 round of Geneva talks since Turkey and Syrian opposition have refused to allow them to join the discussions.

The new round of Syria talks in Kazakhstan’s Astana will likely deal with efforts to end six years of fighting and finding ways of building trust between government and armed opposition forces, the Russian envoy to the UN Office in Geneva said.

"Astana and Geneva are two different political processes. There would be no Geneva without Astana," Alexey Borodavkin said, adding that the presence of armed opposition factions at Astana talks made them more ceasefire-oriented.

"This does not mean that crucial political issues, such as a new constitution and state institutions, should be crossed out from the Astana agenda. Armed opposition is a stakeholder in the negotiations and they are liable to pick topics they deem key to political settlement in Syria."