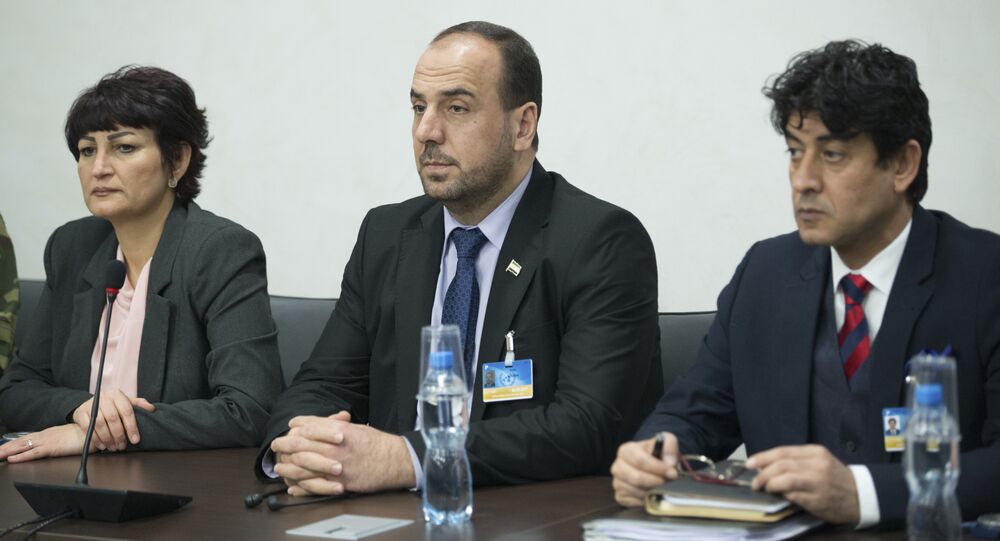 HNC: Geneva 4 Closes With No Clear Results, But on More Positive Note

HNC delegation head Nasr Hariri stated that the last round of intra-Syrian talks in Geneva closes with no clear results, but with it was more positive than previous rounds.

GENEVA (Sputnik) — The fourth round of intra-Syrian talks in Geneva closes with no clear results, but the outcome is more positive compared to the previous rounds, HNC delegation head Nasr Hariri said Friday.

"Although we are closing this round without clear results, but this time it was more positive. It was the first time we discussed in acceptable depth issues related to the future of Syria" Hariri told reporters after meeting with UN Special Envoy Staffan de Mistura.

© REUTERS / Denis Balibouse
Syrian HNC to Try to Form Opposition Delegation With Cairo, Moscow Platforms - Kodmani
Nasr Hariri said that the HNC has certain remarks on the ideas of UN Special Envoy for Syria Staffan de Mistura on the future of the country laid down in a non-paper that he gave to the delegations for consideration.

"De Mistura gave us a non-paper, they are general provisions on the future of Syria… We have some additional remarks, which we will present to de Mistura, just to enrich this paper," Hariri told reporters after meeting with de Mistura.

Earlier in the day, de Mistura explained his vision of the future of Syria in a non-paper of 12 points, which he handed over to the delegations.

The fourth round of the intra-Syrian talks between the government and opposition factions under the auspices of the United Nations began in Geneva last week and is expected to conclude later in the day.