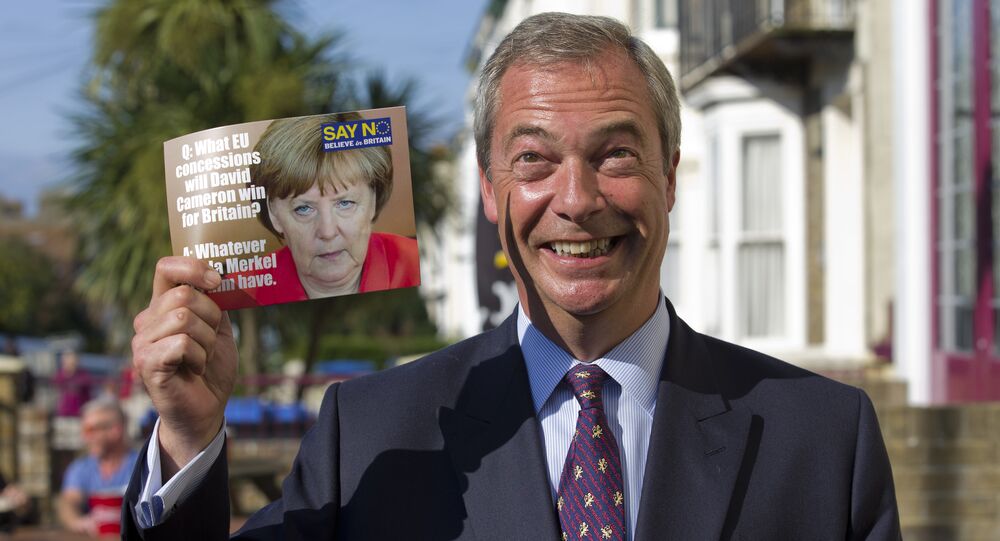 The Electoral Commission has been urged to investigate the Leave.eu campaign, backed by former UK Independence Party (UKIP) leader Nigel Farage, for not declaring the use of Facebook profiling technology to convince Brits to vote Leave.

Mr. Farage, who was one of the main campaigners for Britain's Leave campaign, was being advised by a company called Cambridge Analytica (CA). CA use big data and advanced psychographics to grow audiences, identify key influencers and move people to action. CA were also hired by Trump and used used artificial intelligence (AI) to personalize political messages according to the things voters say and "like" on Facebook.

But Leave.EU did not declare CA's role to the Electoral Commission, according to filings for the campaign published last week.

​As a result pro-remain supporter and Labour MP Stephen Kinnock has requested the UK's elections and referendums regulator urgently investigates whether CA's involvement in the Leave campaign breached provisions in the Political Parties Elections and Referendums Act 2000.

"The market rate for a donation of this kind could amount to hundreds of thousands of pounds, based on the previous experience of referendum campaigns and political parties for analytical tools," Kinnock told Claire Bassett, Electoral Commission chief executive, in a letter.

"Yet Leave.eu has not declared this donation-in-kind at any point in their returns to the Electoral Commission," Mr. Kinnock added.

However Leave.eu have denied any wrongdoing and their communications director, Andy Wigmore, has said that CA did not work with the Leave campaign.

"[CA] did no work for us formally and if they had it would have been way before you had to report expenditure,"  Mr. Wigmore said in a recent interview.

© REUTERS / Neil Hall
A worker answers a telephone in the office of Brexit group pressure group "Leave.eu" in London, Britain.

© REUTERS / Suzanne Plunkett
Investigation Into UKIP Funding Misuse a 'Witch Hunt,' MEP Tells Sputnik
The European Parliament Bureau ruled at the time that the Alliance for Direct Democracy in Europe (ADDE), to which UKIP is affiliated, would have to pay back a total of US$182,267 after claiming the group misused EU funding.​

Member of the European parliament (MEP) from UKIP Roger Helmer spoke to Sputnik about the allegations made at the time, saying the whole situation mirrored that of a "witch hunt."

"We knew ADDE expenditure would be subject to intense scrutiny, so we bent over backwards to ensure compliance," Mr. Helmer told Sputnik.

"We hired not one, but two long-serving compliance officers who had experience of working for years with other groups in the parliament. They were astonished at the parliament's rejection of our activity — which is identical to that of other groups. But pro-EU groups are not similarly challenged," said Mr. Helmer.

See the difference between the amount of private v public funding received by political parties pic.twitter.com/n7E9EAdu5z

​Mr. Kinnock said that it is vital for our democracy that the electorate has full information about which organisations are backing which causes, what they are putting in, where they are from and what they do. That is fundamental to any sensible and ethical way of looking at campaign funding, he stressed.