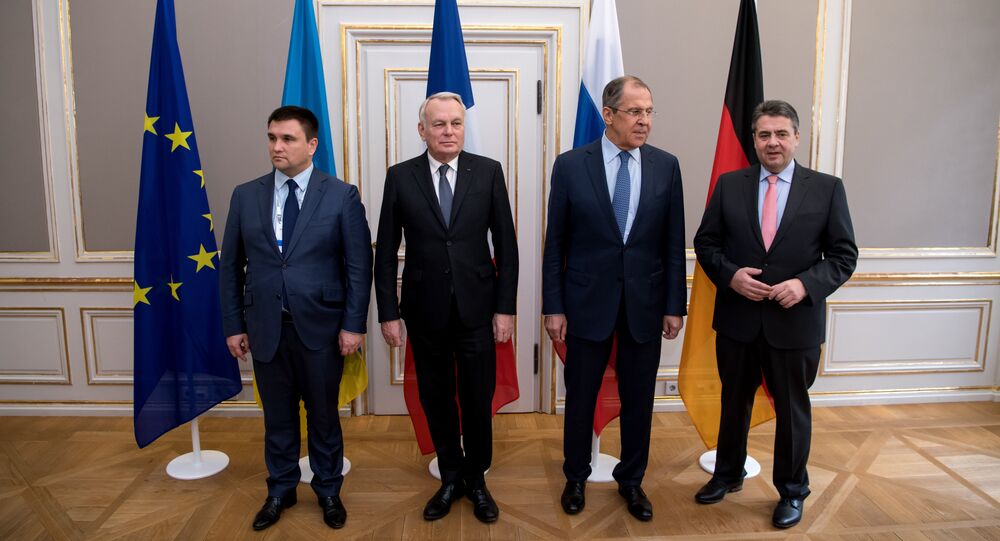 Normandy Format Provides Effective Dialogue on Ukraine Without US - Paris

The 'Normandy Four' format of talks on Ukraine crisis settlement, carried out by Russia, Ukraine, France and Germany, provides a productive dialogue even without the US participation, French Foreign Ministry spokesman Romain Nadal said Wednesday.

PARIS (Sputnik) — On Tuesday, Russian Deputy Foreign Minister Sergei Ryabkov said that the administration of then-US President Barack Obama sought the expansion of the Normandy format, however, the European countries rejected the idea.

"The Normandy format provides a permanent basis for a productive and regular dialogue, which aims at achieving the implementation of the entire package of the Minsk agreements," Nadal said at a press briefing.

The ministerial spokesman pointed out that Washington as well as other European states, which are kept informed of the progress of talks might also "play an important role by urging Russia and Ukraine to implement their obligations."

© Sputnik / Igor Maslov
They Need to Survive: Kremlin Considers Business Nationalization in Donbass Understandable
The Donbass conflict erupted in April 2014 as a local counter-reaction to the West-sponsored Maidan coup in Kiev that had toppled President Viktor Yanukovych in February. Residents of the Donetsk and Lugansk regions held independence referendums and proclaimed the People's Republics of Donetsk and Lugansk. Kiev has since been conducting a military operation, encountering stiff local resistance.