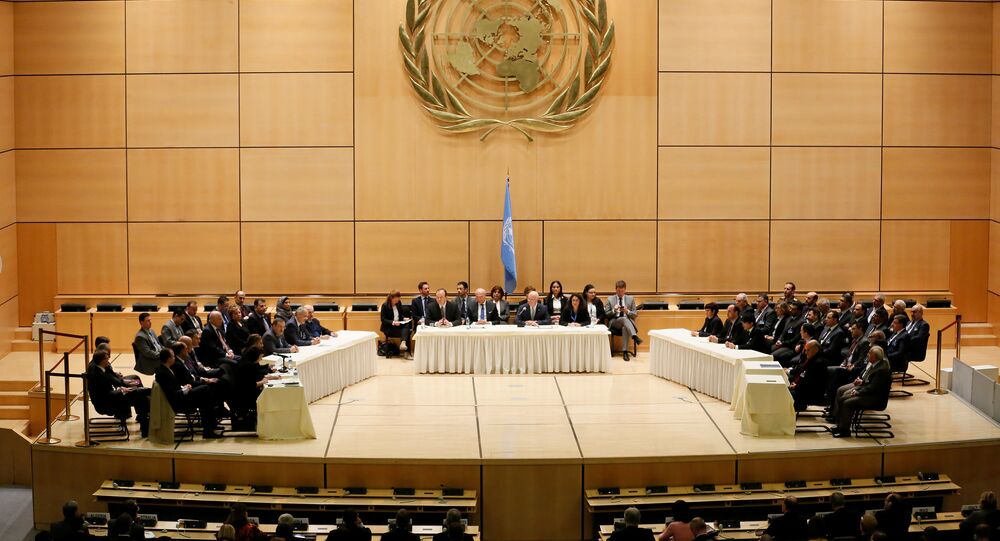 Geneva: Opposition Pushing Ahead With Creation of Interim Government in Syria

The Syrian opposition is seeking to form an interim government in the country, National Coalition for Syrian Revolution and Opposition Forces' member, Mohammed al-Shemali told Sputnik. According to al-Shemali, this requirement is a top priority for the opposition at the Geneva talks.

"Twenty representatives from the Syrian opposition are participating in the Geneva talks. On the part of the official [Syrian] government 11 people are involved. Nothing definite can yet be said. We have yet to start a full discussion, only some general points have been considered. It is unclear for how many days the negotiations will go on, they could be suspended tomorrow or on any other day. We demand the creation of an interim government [in Syria] at these talks. This is our basic requirement," al-Shemali said.

"The other party [the UN] demands a transition period, a Constitution and elections," the opposition representative said, "Our top priority is the formation of an interim government [in the first place]. Time will tell whether or not we will achieve our goal."

According to al-Shemali, the Syrian government is "unwilling" to seek new ways to settle the crisis.

"What the [Syrian] authorities are pushing ahead with is the cessation of hostilities and the continuation of the mutual ceasefire regime," he said, expressing skepticism regarding the prospects of the Geneva talks.

He added that the opposition has not yet held "direct negotiations" with the Assad government. However, according to al-Shemali, the opposition representatives have confirmed their readiness to talk to the official Syrian government directly.

© REUTERS / Pierre Albouy
United Nations Special Envoy for Syria Staffan de Mistura addresses the Syrian invitees in the presence of members of the UN Security Council and the International Syria Support Group in the context of the resumption of intra-Syrian talks at the Palais des Nations in Geneva, Switzerland, February 23, 2017

Bashar revealed that the HNC will focus on three major issues- the ceasefire, a possible attack on Ghouta, and the political solution for Syria.

On February 28, the Astana platform members of the Syrian opposition told Sputnik that they were going to meet with Deputy Foreign Minister Gatilov the next day.

"We will discuss three topics with the Russians — the ceasefire, a planned attack on Ghouta, and the political solution," Bashar said.

© AFP 2021 / FABRICE COFFRINI
Syrian Opposition to Meet Russian Deputy FM in Geneva
"On the ceasefire, we will seek guarantees from Russia and Turkey. We want them to do what they have committed themselves to… Concerning Ghouta, we have information that the [Assad] government is planning an attack on [it]. We want to prevent it," he told Sputnik.

However, while endorsing Ankara's efforts to defeat Daesh (ISIS/ISIL), the HNC opposes the presence of any other foreign powers, including Russia and Iran, in the country.

"As long as the Turks are fighting ISIS [Daesh], it's good for the Syrian people," Bassam Barabandi, a political advisor to the HNC, told Sputnik Tuesday, claiming that neither Russia nor Iran were targeting Daesh.

"We always prefer to have the Syrian national forces fight ISIS [Daesh]," he added. "We don't need any foreign powers."

© AP Photo / Sergei Grits
Astana May Host Technical Talks on Syria After Geneva Negotiations
Meanwhile, political observers highlight that the major obstacle to progress at the Geneva talks is that there is no consensus among various opposition groups involved in the negotiations.

"It is difficult to create a joint opposition delegation because each platform differs from the others," Kurdish politician and member of the Syrian Democratic Council opposition party Reyzan Heidu told Sputnik on Wednesday.

"The creation of the joint delegation under the common platform and with same thoughts… is at the moment impossible," he said.

To add insult to injury, the Syrian Kurds, the largest ethnic minority in Syria, have yet to be invited to the talks.

"We have always advocated and continue to advocate the Syrian Kurds' participation in the [Syrian] negotiations," Russian Permanent Representative to the UN Alexei Borodavkin told reporters at the beginning of the Geneva talks.

"This is a real military force, which holds the key not only to 70 percent of the Syrian-Turkish border, but also to the water resources of the Euphrates River, which is crucial for Syria. Negotiations without [the Syrian Kurds] will prove futile," Bagdasarov told RIA Novosti, commenting on the matter.

On the other hand, it is equally important not to allow Islamist extremist groups banned by the UN Security Council to penetrate into the negotiations.

"We cannot allow for extremist circles from organizations banned by the [UN] Security Council to leak into this political process," Russian Foreign Minister Sergey Lavrov said Wednesday, "I hope that the Geneva format will not be disrupted, and just like the Astana format, it will continue to play an important role in promoting the Syrian settlement."