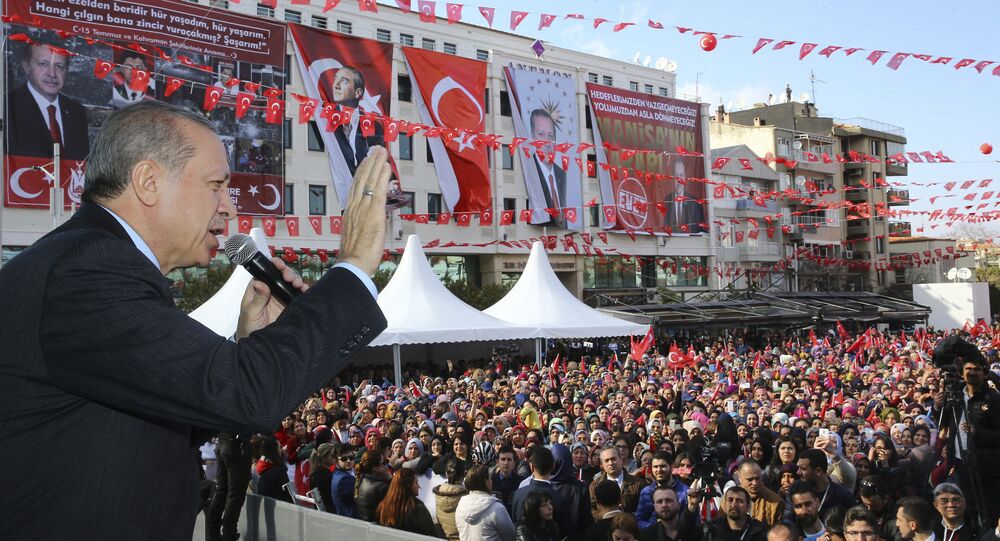 Free and Fair or Unfree and Unfair? Debate Over Turkish Referendum Intensifies

In April, a referendum on constitutional change will be held in Turkey. If successful, President Recep Tayyip Erdogan will be granted greater powers, and could stay in office until 2029 - the prospect has sharply divided Turkish society, and prompted questions over the reforms' true implications and reach.

Polling on the referendum has fluctuated wildly ever since the July coup attempt — support for the measures has been as high as 62 percent, and as low as 30 percent. February polling suggests support is about evenly split, and although critics have charged that the media is giving disproportionate coverage to the 'Yes' side, and actively suppressing opposition voices.

For instance, national news anchor Irfan Degirmenci publicly came out in support of 'No', and was summarily dismissed from his post, and national newspaper Hurriyet spiked an interview with Nobel Prize winning Turkish author Orhan Pamuk due to his critical tone.

TV station 'Kanal D' has fired anchor İrfan Değirmenci after he announced that he is going to vote "no" in upcoming Turkish referendum. pic.twitter.com/14AfCYrin8

Journalists as a group were one of the premier victims of the post-coup purge of Turkish civil society pursued by Erdogan, with hundreds arrested and many media outlets shuttered — and the President also issued a decree which stripped Turkey's Supreme Election Board of its power to fine broadcasters that do not give equal airtime to different parties and views ahead of elections. Prime Minister Binali Yildirim has claimed terror groups support 'No.'

Interview with Orhan Pamuk was cancelled from publication on @Hurriyet @HDNER where he announced he will vote 'no' in Turkey's referendum pic.twitter.com/todkUKYss0

A popular picture circulating on Turkish social media satirizes such sentiments, showing Erdogan and his allies under the word 'YES', with opposition leaders depicted alongside alleged coup mastermind Fethullah Gülen, ISIS leader Abu Bakr al-Baghdadi and an American flag under 'No.'

However, Emine Nur Gunay, a member of parliament for Erdogan's governing Justice and Development Party and a representative at the Council of Europe, said fears of suppression and election meddling were unfounded, stating that whenever she turned on the TV, "there are so many opposition MPs on television."

She added that the referendum campaign would have none of the polarizing rhetoric that marked the previous elections, with the ruling party favouring a "friendly and inclusive" approach.

Many have suggested that talk of the reforms decimating Turkish democracy are unfounded. If enacted, they will transform Turkey's government into an executive presidency system from a parliamentary system.

The new constitution involves removing the post of Prime Minister, currently appointed by  Parliament, and making the President the head of the government. The President would also appoint all ministers. In essence, it would shift Turkey's government from a French/US model to a UK model.

The proposed constitution would also limit the rights and privileges of the military, the President's primary antagonist and opponent during his time in office — in particular, those linked to the military would not be able to run for election, and military courts would be abolished.

While neither of those reforms provoked much controversy, proposals to make the Supreme Board of Judges and Prosecutors (HSYK) would lose its independent status and become subordinate to the Justice Minister have proven divisive. There is much acrimony between Erdogan and this body, due to a 2014 anti-bribery campaign that saw senior AKP officials arrested on corruption charges.

If a 'No' vote prevails, it will mark Erdogan's first major political failure since his election in 2002, and could be the trigger the eventual end of his political career — defeat would surely open up the floodgates of opposition and dissent.

Not a single election held under his 15-year incumbency has failed to be judged free and fair by international observers, although the stakes on April 16 will perhaps be the highest they have ever been — and if opposition concerns are valid, the referendum may mark a reversal of this legacy.

Turkish Leadership Presses for Constitutional Change Ahead of Referendum