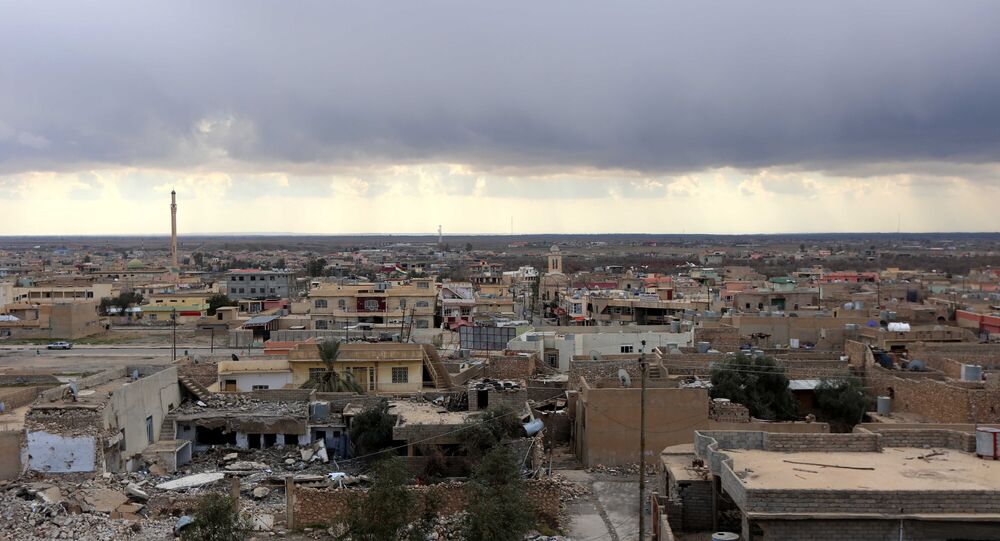 Iraq has a positive view of the Syrian draft constitution proposed by Russia, especially its provision implying removal of the word "Arab" from the name of the country, former Iraqi Human Rights Minister Bakhtiar Amin said on Monday.

© AP Photo / Hassan Ammar
Syrian People to Decide on Draft Constitution Proposed by Russia - Parliament Speaker
MOSCOW (Sputnik) – He added that Syria would not be able to return to the pre-war period with the Syrian government facing a need to change its approach and way of thinking.

"Iraq has a very positive view of the Syrian draft constitution proposed by Russia. For the first time in the modern history of Syria someone offers the Syrian Arab Republic to remove the world ‘Arab’ in its name because this is a multinational, multireligious society – not all Syrians are Arabs and other people must feel as a part of the country, they must have all civil rights and must be recognize and respected," Amin said at the conference organized by the Valdai international discussion club.

The draft constitution was presented to the parties of the Syrian conflict during the negotiation in Astana that took place on January 23 – 24. Head of the Russian delegation Alexander Lavrentyev stressed that Russia was not interfering in consideration of constitution and presented the draft to the opposition simply in order to accelerate the process.

According to Amin, representatives of Iraq should take part in the negotiations in both Geneva and Astana aimed at settlement of the Syrian conflict, a former Iraqi human rights minister said Monday.

"I think that the world should support the example of Prime Minister Haider Abadi, who has good relations with the Kurds and President of Iraqi Kurdistan Masoud Barzani, it is necessary to support their efforts in struggle against the Islamic State [Daesh]. [Kurds] could also play a positive role in the peace settlement in Syria, they should participate in Astana and Geneva, as well as the Iraqi government should be a part of the process, which is ongoing on these venues," Bakhtiar Amin said on the sidelines of a conference organized by the Valdai international discussion club.

He added that Iraq appreciated Russia's support of the Iraqi Kurds, as well as Moscow's assistance in the fight against Daesh fighters.

The international community has been making efforts aimed at settlement of the Syrian conflict, in which government troops have been fighting numerous extremist groups and opposition fractions. Daesh, which is one of the most powerful terrorist organizations in Syria, has occupied vast territories of the crisis-torn state, as well as of Iraq.