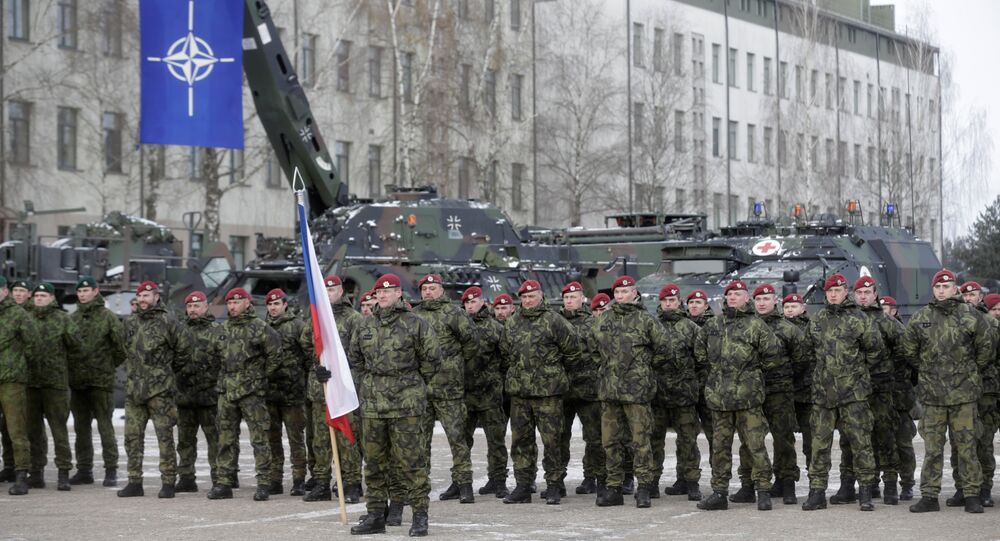 United States President Donald Trump was correct in his assessment that the North Atlantic Alliance is outdated, Associate Professor in International Politics at the Universiteit Antwerpen Tom Sauer asserted, saying that the bloc should be replaced by a new security organization that will encompass countries in Europe and Asia.

"NATO should be transformed or even be replaced by a new Eurasian-Atlantic collective security organization that includes Russia. That will also be in the interest of Ukraine and the Baltic states," the analyst wrote for the National Interest. "The newly built headquarters for NATO in Brussels, which will be inaugurated in the presence of President Trump at the end of May, is large enough to fit them all."

Sauer referred to NATO's ongoing enlargement as "the biggest mistake" the bloc has made. He also noted that Western countries should have asked Russia to become a part of "the Euro-Atlantic security architecture on an equal basis" following the end of the Cold War.

© REUTERS / Ints Kalnins
NATO 'Should Have Dissolved' Years Ago, But Chose 'Aggressive Expansion' Instead
This is something that Russian officials and experts have also advocated. On February 18, Russian Foreign Minister Sergei Lavrov mentioned a common security space in his speech at the Munich Security Conference.

Russia "has always been sincere in advocating work based on equal footing in order to create a common space of security, good-neighborliness and development from Vancouver to Vladivostok. The tensions of recent years between North America, Europe and Russia are unnatural; I would even say they go against nature," he said.

Sauer maintained that any defense alliance, including NATO, is "temporary" in its nature since they are created to pursue certain goals and are dissolved once the needed objectives are achieved.

"It is indeed bizarre that NATO is still alive," he observed. "The implosion of the Warsaw Pact and the USSR itself should, indeed, have led to the demise of NATO."

Many have pointed out that the North Atlantic Alliance stepped into uncharted territory following the end of the Cold War, looking for enemies, both real and imagined, largely outside of its sphere of influence to find a new basis for its existence. The analyst mentioned proliferation of weapons of mass destruction, so-called rogue and failed states, as well as ethnic conflicts and terrorism as some of the main threats that the bloc has focused on in the last two and half decades. However, the alliance has apparently been ill-prepared to deal with these challenges.

"NATO's post-Cold War track record is dismal, which is not surprising, given the nature of the beast. Apart from the Balkans, which are more or less stable (although tensions are flaring up again these days), the NATO military interventions in Afghanistan and Libya are a complete failure. … Again, this should not come as a surprise, because collective defense organizations are not meant for carrying out peace-building operations."

The analyst also pointed out that NATO has tried to deal with "collective security tasks" that are supposed to be addressed by organizations like the United Nations or the Organization for Security and Co-operation in Europe (OSCE). As a result they have been "sidetracked."

© REUTERS / Ints Kalnins
'Stop These Madmen': Germans Blast NATO Muscle-Flexing in the Baltics
"Collective security organizations regulate the use of force amongst its member states, and they are – in contrast to collective defense organizations – not meant to serve against an external enemy," the analyst explained.

President Trump appears to understand that NATO is not the best solution to the emerging challenges. Sauer suggested that although Washington will remain committed to the bloc, the current US administration will pay less attention to it. If true, this will create a unique opportunity for Europe to invest into its own security.

"Now, for the first time ever, we have an American president who calls NATO obsolete. European leaders should now get their act together and agree with this assessment," he said. "There has never been a better external opportunity to strengthen European foreign, security and defense policy. In a world without NATO, the Europeans have no escape from taking up more responsibilities."