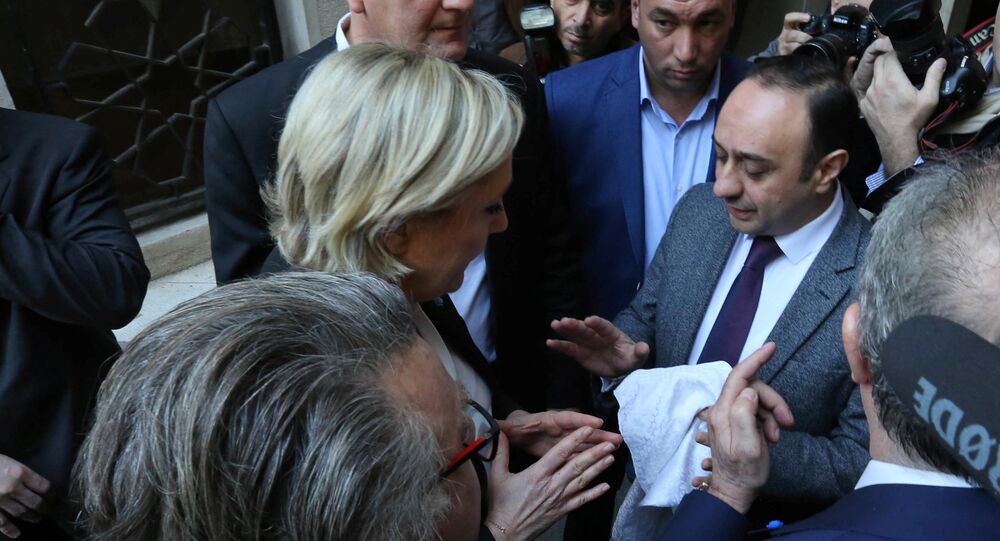 French presidential candidate Marine Le Pen canceled a Tuesday meeting with the Grand Mufti of Lebanon, Sheikh Abdul Latif Derian, as she would have been required to wear a headscarf while in his presence.

Le Pen made a two-day visit to Lebanon, one of the most religiously-diverse countries in the world, with sizable populations of Shia and Sunni Muslims, as well as numerous Christian denominations. She met with newly-elected President Michel Aoun, a Christian, and Prime Minister Saad al-Hariri, a Sunni Muslim.

When it came time to meet with Derian, the most powerful person within the Lebanese Sunni community, Le Pen was told that she would be required to wear a headscarf. She refused, stating to reporters, "You can pass on my respects to the grand mufti, but I will not cover myself up."

"I met the Grand Mufti of Al-Azhar," she told reporters, in reference to a 2015 meeting with Ahmed el-Tayeb, Egypt's most prominent Sunni official. "The highest Sunni authority didn't have this requirement, but it doesn't matter."

"I consider the headscarf a symbol of a woman's submission," Le Pen said. "I will not put on the veil." She cited Michelle Obama's refusal to wear a headscarf in Saudi Arabia, a decision "considered admirable" by the press.

Khaldoun Awas, with Derian's press office, said that he was surprised by Le Pen's refusal, and that her aides had been informed of the requirement beforehand. "I personally greeted her at the door of the Edict House and wanted to hand her a white headscarf that was in my hand, she refused to take it," he said.

© AFP 2020 / Jalaa Marey
Trump-Proposed Safe Zones in Syria Could Be Created on 'Borders With Israel, Lebanon'

"I urged her to put it on, she refused and said she would not put it on and walked out without attending the previously agreed upon meeting with the mufti. The Edict House regrets such inappropriate behavior at such meetings."

Under France's strict separation of church and state, headscarves are banned in government institutions such as public schools. Le Pen has in the past argued for the ban to extend to all public spaces.

Le Pen's visit attracted controversy on Monday when she declared her support for Syrian President Bashar al-Assad as the "only viable solution" to keep Syria out of the hands of Daesh. "There is no viable and plausible solution other than this binary choice, which is Bashar al-Assad on one hand and [Daesh] on the other hand," she told the press.

"Assad is obviously a much more reassuring solution today for France than [Daesh]."

In addition to opposing the current French government platform, Le Pen's proclamation attracted both veiled and explicit criticism."The most serious error would be to link Islam and Muslims on the one hand and terrorism on the other," said Prime Minister Hariri, after their meeting.

"The Lebanese and Arabs, like most of the world, considers that France is the home of human rights and the republican state makes no distinction between citizens on ethnic, religious or class grounds."

"I hope France will make a better choice than this fascist right. We cannot ask the Lebanese people to forget the crimes of the Syrian regime against it and we cannot return en masse [Syrians] while there is the Syrian regime. It's a double insult," he said.

Lebanon has taken in 1.5 million Syrian refugees, making up about 25 percent of the tiny country's population. President Aoun has characterized the refugees as a security threat, and has made their return to Syria a top priority.

"We discussed the long and fruitful friendship between our two countries," Le Pen said of her 30-minute meeting with Aoun. "We raised the concerns we share over the very serious refugee crisis. These difficulties are being overcome by the courage and generosity of Lebanon but this cannot go on forever."

The right-wing candidate's visit to Lebanon was done to bolster her foreign-policy qualifications, and perhaps woo the votes of some of the 250,000 French of Lebanese origin, most of whom emigrated during Lebanon's 1975 civil war.