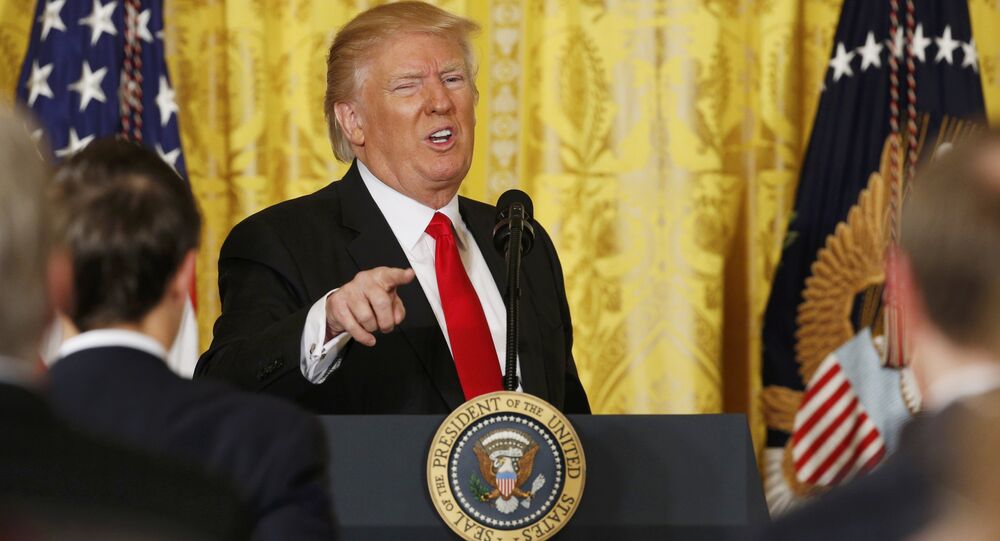 US Historian Predicts Trump's Presidency Will Be Second Shortest in History

As US President Donald Trump continues on a policy course that puts him in conflict, sometimes, with the preceding political establishment, at least one US historian is giving the establishment something to dream about.

© REUTERS / Henry Romero
The Coup Against Trump and Why Russia 'Must Be Destroyed'
Trump's presidency might be second shortest in US history, says Ronald Feinman of Florida Atlantic University. William Henry Harrison holds the record for the shortest administration at 31 days. Trump looks set to beat that in just a couple of days; however, he has yet to outrule James A. Garfield, who was president for 199 days in 1881, but died "after terrible suffering and medical malpractice" when he was shot by an assassin.

If Trump manages to eclipse Garfield, the next contender to beat is Zachary Taylor, who served 16 months and five days for the third  shortest presidential term in US history.

According to Feinman, who insisted that Hillary Clinton would win November's presidential election with a 49 to 44 percent electoral majority, Trump will be either impeached or forced to resign in a matter of weeks. After that, Vice President Mike Pence will take the reins, according to US law.

So why would that happen, one might ask? According to Feinman's blog post, the greatest sin of Donald Trump is failing to continue acting as US presidents did before him. Feinman cites the "abrupt ending of a phone call to the Australian Prime Minister, [US's] loyal ally in four wars in the past;" Trump's "seeming lack of respect for Germany's Chancellor Angela Merkel;" and "lack of strong support for NATO" as reasons for a possible premature ending to his administration. Feinman does not trouble himself to speculate as to whether the aforementioned respect and support are justified, though. He also names Trump's puzzling attitude towards the longstanding One-China Policy as another reason he won't be around long.

The blog post goes on with three paragraphs of what one might see as softening the ground for public acceptance of Pence as "Acting President." According to Feinman, Pence might become US president if Trump is forced to leave office, according to 25 Amendment of the US Constitution.

"Pence faces now a situation that has some similarity to Gerald Ford under Richard Nixon […], and the possibility of future Congressional action against Donald Trump if his mental behavior continues to disturb the top leadership of the Republican Party and the foreign policy establishment," Feinman writes.

© REUTERS / Ali Song
Conflict of Interest? China Finally Awards Trump Trademark After One-China Chat
Feinman does not name any names, so it is up to the reader to ask  whether under "top leadership" Feinman is talking about Trump's most vocal opponent, Republican Senator John McCain. (Who, it should be noted, has voted to confirm most of the president's often-controversial cabinet appointments and seems historically to have limited his principled opposition to soundbites.)

This is likely, though, since Feinman starts his article (and his list of Trump's alleged sins) by recalling the resignation of National Security Adviser Michael Flynn over his talk with Russian Ambassador to US Sergey Kislyak back in December 2016. Feinman notes that Trump has faced criticism for his apparent intention to warm up US relations with Russia, and questions Trump's "loyalty to traditional American foreign policy."

According to Feinman, changing US foreign policy is a sin in and of itself, regardless of whether the previous policy is worth following.

Vice President Pence "can be expected to work behind the scenes to insure that Trump stabilizes his utterances and actions, particularly on foreign policy and national security matters."

Interestingly, Feinman himself argues this might be well perceived as "palace coup," so Pence will have to "make a convincing case that it is too risky to leave Trump in power."

"The Pence Presidency seems inevitable," Feinman writes in conclusion to what appears to be a strange hybrid set of instructions for Pence to turn against the president/psychological counselling session for readers to prepare for the inevitable changes to come. And, of course, entirely mere speculation.

Going Back on Trump's Words: Will US Regain Trust of EU Allies After Munich?