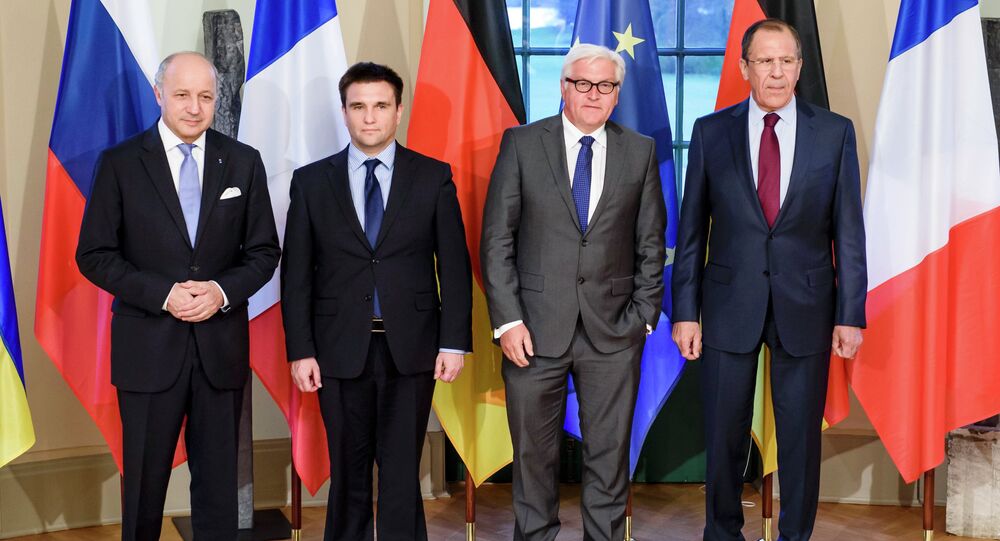 Paris and Berlin have reiterated their position that there were no alternative to the Minsk agreements on the Ukrainian settlement, French Foreign Minister Jean-Marc Ayrault said Saturday.

© Sputnik / Grigory Sisoev
Russia Will Not Lift 'Sanctions' on EU Until Minsk Deal Implemented - Lavrov
MUNICH (Sputnik) — In 2014, Kiev authorities launched a military operation against militias in the Donbass region. In 2015, the two sides reached a ceasefire deal brokered by the leaders of the Normandy quartet including Russia, France, Germany and Ukraine in Minsk. Throughout 2016, the Normandy Four and the Organization for Security and Co-operation in Europe (OSCE) have been stressing the need to implement Minsk provisions but Kiev has stalled in giving a special status to Donbass as specified in the agreement. Ceasefire violations have continued.

"I don't see an alternative to the Minsk agreements. It is very important to get involved and to go forward as we agreed with Germany," Ayrault said after a ministerial meeting in the so-called Normandy format in Munich.

Earlier in the day, Russian, Ukrainian, French and German foreign ministers held talks in the Normandy format on the sidelines of the Munich Security Conference to discuss peace progress in eastern Ukraine.