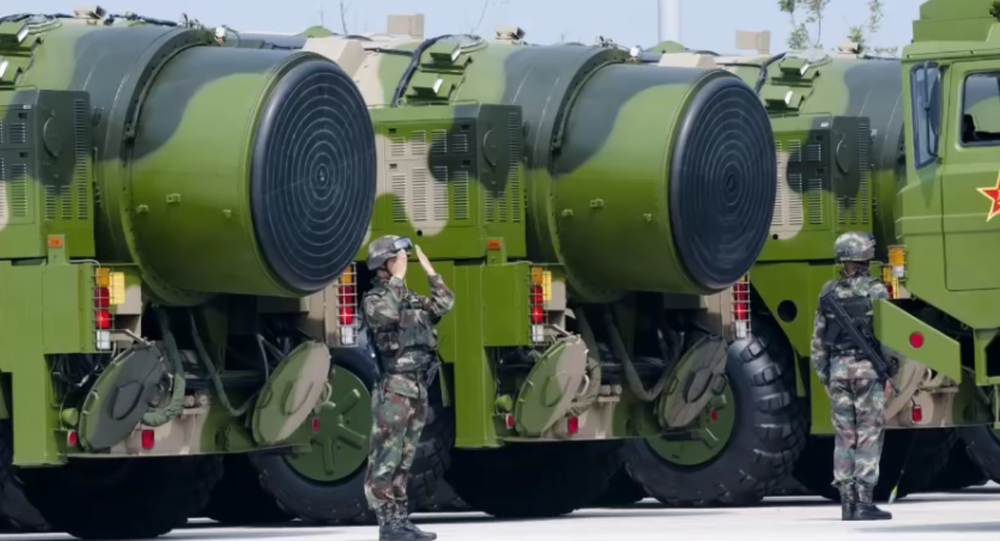 © AFP 2021 / JIM WATSON
Farewell, 'Legend'! US Decommissions Its First Nuclear-Powered Aircraft Carrier
The Trump administration's nuclear doctrine is likely to be supplemented with new provisions on the modernization of America's atomic stockpiles and the issue of US-Chinese negotiations on strategic nuclear weapons reduction, Russian political and military analyst Alexander Perendzhiev, an associate professor in the Faculty of Political Sciences and Sociology at the Plekhanov Russian University of Economics, told RIA Novosti.

However, according to Perendzhiev, any further changes to the strategy proposed by Trump's predecessor, Barack Obama, are unlikely.

On January 27 Trump inked a memorandum for the US Secretary of Defense ordering to initiate a Nuclear Posture Review (NPR).

"The Secretary shall initiate a new Nuclear Posture Review to ensure that the United States nuclear deterrent is modern, robust, flexible, resilient, ready, and appropriately tailored to deter 21st-century threats and reassure our allies," the memorandum said.

Commenting on the matter Air Force Chief of Staff Gen. David Goldfein told journalists Tuesday that the US is likely to reconsider its nuclear doctrine.

Each new administration has to present its vision of the national nuclear posture to the US Congress.

In April 2010 former US president Obama released a declassified portion of his strategic vision. Obama modified the Bush administration's nuclear doctrine by narrowing the conditions under which the United States could use nuclear arms.

"The 2010 Nuclear Posture Review (NPR) outlines the Administration's approach to promoting the President's agenda for reducing nuclear dangers and pursuing the goal of a world without nuclear weapons, while simultaneously advancing broader US security interests," the document read.

In contrast, ex-President George W. Bush's strategy published in 2002 envisioned the use of nuclear weapons "to deter a wide range of threats." The list of threats included chemical, biological and large-scale conventional attacks.

© AFP 2021 / JIM WATSON
US President Donald Trump (C) waits at his desk before signing confirmations for James Mattis as US Secretary of Defense and John Kelly as US Secretary of Homeland Security, as Vice President Mike Pence (L) and White House Chief of Staff Reince Priebus (R) look on, in the Oval Office of the White House in Washington, DC, January 20, 2017

"I believe that the Obama strategy will largely remain intact under Trump," Perendzhiev told RIA Novosti, adding that the new administration will be also focused on preventing the unauthorized use of nuclear weapons and nuclear terrorism."

© CC BY-SA 4.0 / IceUnshattered / Dongfeng-5B
Beijing's ICBMs: China Boosting Nuclear Capabilities, Narrowing Gap With US, Russia
However, he noted that Trump is likely to supplement the Obama doctrine with new provisions on nuclear modernization and holding talks with Beijing on the reduction of strategic nuclear weapons.

"We are talking about modernization of the US nuclear arsenal, Trump referred to during his election campaign. Also [the new provisions] may envisage China's involvement in the negotiation process on the reduction of strategic nuclear weapons," the Russian military analyst underscored.

Indeed, China has made a significant progress in bolstering its nuclear capabilities, according to Russian military expert Vasily Kashin.

"It appears that there are reasons to expect China to make a spectacular breakthrough that in coming years it will bring it closer to the US and Russia in terms of strategic nuclear capabilities. This will prompt radical changes in the rules of the game in the Asia-Pacific region," Kashin told Sputnik.

Trump has repeatedly highlighted the need to modernize US nuclear stockpiles.

"The United States must greatly strengthen and expand its nuclear capability until such time as the world comes to its senses regarding nukes," Trump tweeted on December 22, 2016.

​However, it was Trump's predecessor, Barack Obama, who kicked off a nuclear modernization program last year worth $1 trillion.

Experts call attention to the fact that the new US President is determined to carry out a "great rebuilding of the Armed Forces."

"I'm signing an executive action to begin a great rebuilding of the armed services of the United States," President Trump said during his first visit to the Pentagon following his inauguration.

Speaking to Sputnik in late January, Russian military expert and First Vice President of the Academy of Geopolitical Studies Konstantin Sivkov suggested that Trump has no trust in NATO's ability to ensure America's security.