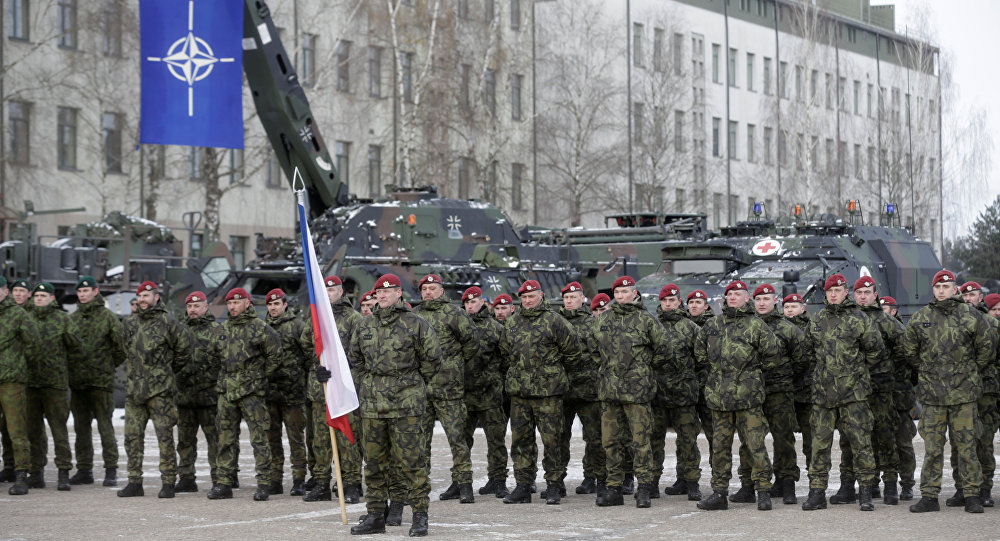 The North Atlantic Alliance could be viewed as an instrument which brought European nations together to overcome the burden of the past, Professor Horst Teltschik, who served as national security advisor to Chancellor Helmut Kohl, told Sputnik Germany, adding that the bloc should not necessarily be seen as a means targeted against someone else.

"Germany is the reason why we need NATO. We are located at the center of Europe. We are the largest country and the leading economic power [on the continent]. If you take a look at history, you will understand that other nations have not forgotten it. It is easier for our neighbors, including Luxembourg, the Netherlands, Demark and Poland, to live with us if we are part of a single union. NATO should not always be viewed as an instrument targeted against someone. It can be viewed as an alliance which has brought us together," he explained.

© AP Photo / Virginia Mayo
'NATO Europe' Feeling Pretty Comfy Under America's Security Wing
Russian officials have been concerned with NATO's recent activities which have largely focused on increasing the bloc's military presence in Eastern Europe, the Baltics and the Black Sea region. In addition, the alliance has boosted defense spending and has conducted more war-games in regions bordering Russia. These activities have led to additional challenges in NATO's relations with Moscow, putting bilateral relationship into deep freeze in the wake of the coup in Ukraine.

Teltschik, who headed the Munich Security Conference, acknowledged that the NATO-Russia Council (NRC) has not been used as often as it should be. He also said that there were positive bilateral initiatives, including trust building and disarmament measures, but not much has been done to enhance them and build on them in the last two decades and a half.

© Sputnik / Sergey Guneev
As Relevant as Ever: Why Trump Needs to Take Putin's 2007 Munich Speech to Heart
Recent tensions between the West and Russia have sometimes been described as Cold War 2.0, but Teltschik dismissed this assessment, saying that he "witnessed the Cold War. This is heaven when compared to it."

United States President Donald Trump has been critical of NATO and those of its members who spend less than 2 percent on defense. The outspoken leader has recently expressed his "strong support" for the alliance, but has called it "obsolete" for failing to deal with the threat of terrorism.

Trump also said that his administration would try to improve relations with Russia, but Teltschik was doubtful that the US president will limit NATO's recent buildup.

"Trump wants NATO members to spend more on defense. NATO forces have been deployed close to Russia's borders. Moscow is likely to respond in kind," he said. "Will it enhance security? I doubt it. … I am convinced that the issue could only be solved through cooperation."

Teltschik, also said that European nations need to devise their own strategy to deal with Russia, without closely following what US leadership says or does.

"We, Europeans, need to understand what we want right now. We need our own agenda. There is no need to keep an eye on what Washington says. This refers to Europe's relations with Russia among other things," he noted.