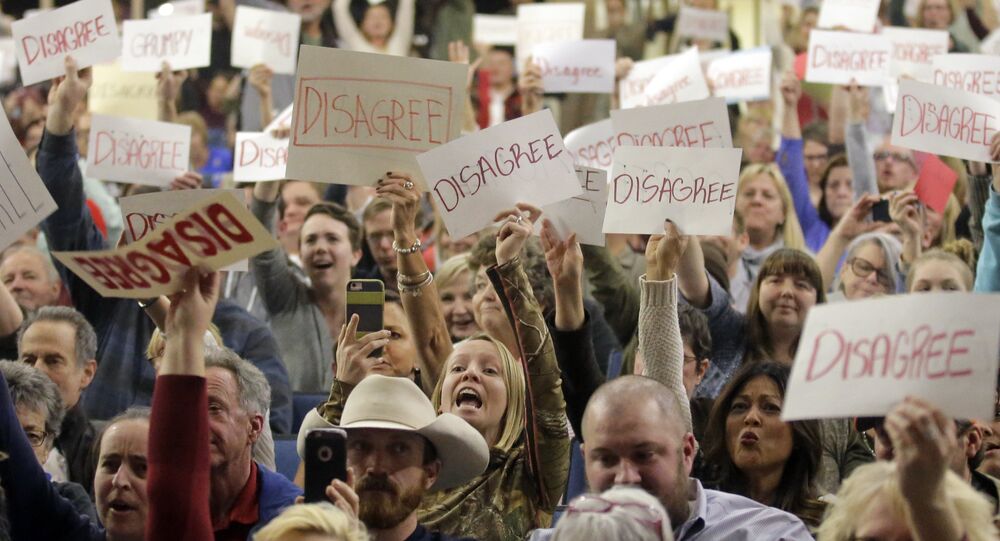 Republican lawmakers are under attack, as fury erupts at town halls across the nation over the potential repeal of the Affordable Care Act, popularly known as Obamacare, as well as general outrage over the actions of the Trump administration.

On Thursday evening, Republicans Jason Chaffetz of Utah and Diane Black of Tennessee were both met with impassioned protests at town hall events over President Donald Trump’s policies, including a promise to replace the Obama administration’s Affordable Care Act.

At a town hall event hosted by Chaffetz at a Salt Lake City high school, over 1,000 people crowded inside as hundreds more protested outside. The event was rowdy, as his own constituents continuously shouted him down over issues involving the actions of the current White House administration.

The lawmaker was confronted about issues such as defunding Planned Parenthood, his support for Trump, and the US Education Department.

"I want to get rid of Betsy DeVos!" Chaffetz said, following up on his desire to get rid of the Education Department altogether, and hand control of schools to the states.

Someone in the crowd immediately fired back, "we want to get rid of you!"

In Tennessee, Black was also confronted by her own outraged constituents.

Black explained to the angry crowd that Republican lawmakers are working to offer tax credits so that people can pick their own insurance, which will provide for "your needs rather than what Washington says you need."

© AFP 2020 / RHONA WISE
First US Healthcare Bill of Trump Presidency Allows States to Keep Obamacare - Lawmakers
Last week, Republican Congressman Tom McClintock had to be escorted out of a town hall event in Roseville, California, after hundreds of people showed up to protest various issues, including the threat to repeal Obamacare.

“What do you expect seniors and people with disabilities with low income to do if you take away our Medicare and Medicaid that we rely on to literally stay alive?” asked Amanda Barnes, who explained that she was paralyzed from the waist down following a hit-and-run accident in a crosswalk five years ago, according to the Sacramento Bee.

McClintock responded by saying there would be a comprehensive bill to give people options.

“The answer is a comprehensive bill that rescinds Obamacare in its entirety, and replaces it with reforms that put the patient back in charge of their own decisions, and give[s] them the widest possible range of choices,” McClintock said. “And assure[s] it’s within financial reach for the majority of Americans.”

Colorado Congressman Mike Coffman, also a Republican, snuck out of a back door at his own event last Saturday, after being confronted by angry residents about the possible loss of their health care.

Coffman has been a strong advocate for eliminating the Affordable Care Act, except when face-to-face with his constituents.