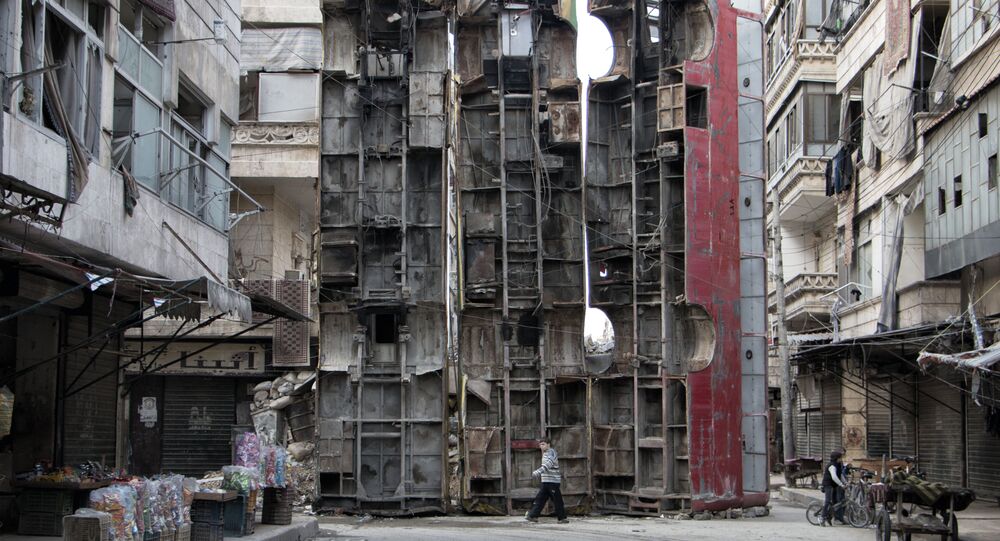 © Photo : Facebook / MoiEgy
Year in Review: How Russia and the West Found Themselves Battling on Information Front
MOSCOW (Sputnik) — On February 7, Amnesty International issued a report accusing the Syrian authorities of killing 13,000 people at the Saydnaya prison.

"We have seen the report, these materials. In essence, we face yet another purposeful provocation, which aims to add fuel to the fire of the subsiding intra-Syrian conflict… and make the Syrians hate each other more," Zakharova told reporters.

She added that the authors of the report "are not ashamed to confess that the enormous numbers of victims they site are a result of calculations based on evidence of unnamed persons."

"In our opinion, the leaders of the respected human rights organization can and should be more exact and have a more responsible approach to such extremely dangerous fantasies of its Lebanese branch."

The Amnesty International has been criticized for bias and lack of evidence in its reports. In December 2015, Russian Foreign Ministry’s spokeswoman Maria Zakharova said the materials the organization used while compiling its reports lacked "a deep expert analysis” and could not be called the actual data.

In April 2016, Chinese Foreign Ministry Spokesperson Lu Kang said the organization often made "partial or even biased" observations on China.

It is patently false that Amnesty International’s Regional Office in Beirut worked on this report unbeknownst to the rest of our 7 million-strong movement worldwide. Our research into the horrific conditions, mass hangings and extermination at Saydnaya had the full backing of the organization’s global leadership, and we stand by our findings.

Our report was the result a year of research, involving first-hand interviews with 84 witnesses that included former Saydnaya guards and officials, detainees, judges and lawyers, as well as national and international experts on detention in Syria. The methodology, including how we calculated the number of hangings since 2011, is meticulously detailed in the report.

It is telling that the Russian Ministry of Foreign Affairs or others try to dismiss these research findings out of hand without providing an iota of information on the true situation in Saydnaya or the extent of extrajudicial or other executions taking place.

Rather than pursuing misguided attempts to question the veracity of the events we have documented, the Russian authorities should use their considerable influence over Bashar al-Assad’s government to ensure international monitors get access to Saydnaya and all places of detention in Syria to establish the truth. In order for any peace process to be effective, it must take into account the security of everyone in the country, whether at liberty or detained.