US President Donald Trump and his Turkish counterpart Recep Tayyip Erdogan have agreed to carry out joint anti-Daesh operations in the Syrian towns of Raqqa and al-Bab. Experts told Sputnik Turkey that Syria will likely remain a major point of contention between the two NATO allies despite the latest deal.

Former Turkish diplomat Ozturk Yilmaz, Deputy Head of Turkey's main opposition Republican People's Party, suggested that Trump and Erdogan focused on two issues, the extradition of a reclusive Islamic preacher Fethullah Gülen, whom Ankara blames for the unsuccessful coup, and Washington's stance on the Democratic Union Party (PYD), a leading Kurdish political party in northern Syria. Turkey views the PYD as a terrorist organization, while Washington has relied heavily on its assistance in its anti-Daesh operation in Syria.

"I don't think that both sides could have found common ground on these complicated issues since their views on them differ greatly," he said. "Joint activities with those stakeholders who can ensure Syria's territorial integrity and bring stability to [the Arab] country as soon as possible is a priority for Turkey at the moment."

In 2016, Ankara readjusted its stance on Syria, veering away from providing assistance to radical groups intent on deposing President Bashar al-Assad and putting more efforts into resolving the Syrian crisis. Along with Russia and Iran, Turkey sponsored the talks between Damascus and armed opposition which led to both sides reaching a ceasefire agreement.

Ozturk Yilmaz pointed out that the announcement on US-Turkish joint activities in al-Bab and Raqqa raises several questions.

"To what extent can the US provide assistance to Turkey in its operation to take al-Bab under control? Will they halt support for the PYD or remove their fighters from the city of Manbij? When the US launches an operation to free Raqqa, how many soldiers will they deploy to Syria and who will be tasked with putting together land forces? It should be understood that if the US offers Turkey to take part in liberating Raqqa along the PYD, Ankara will not accept this," he said. 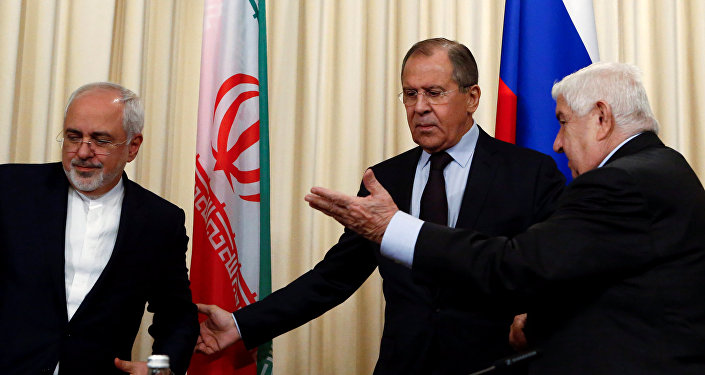 © REUTERS / Sergei Karpukhin
Washington Unsettled With 'Emerging Russia-Turkey-Iran Triangle' in Mideast
Ozturk Yilmaz expressed doubt that President Trump will abandon the Obama administration's strategy aimed at providing assistance to the PYD and its armed wing, known as People's Protection Units (YPG). If Turkish leadership "truly believes" that the Trump team will devise another approach, it "has its head in the clouds," he said. "I think that it is too early to assume that the phone conversation [between Trump and Erdogan] will instantly pay off and resolve all differences between the two nations."

Deputy Chairman of the Turkish opposition Nationalist Movement Party (MHP) Mehmet Gunal maintained that a lot will depend on President Trump when it comes to improving Washington's relations with Ankara.

"Turkey's operation against terrorism and the Kurdistan Workers' Party (PKK) should not be viewed in isolation from the PYD, the YPG and affiliated organizations in Syria and Iraq. We hope that Washington will adopt a friendly approach and make conciliatory gestures," he said.

Turkish political analyst Hasan Kanbolat also said that Washington's support to the Syrian Kurds has been the "source of tensions" in the bilateral relations. He also said that Turkey does not want to act unilaterally in Syria.

"Turkey is making an effort to ensure security of its southern borders, working with Russia, the US and NATO in Syria," he said.

Inside Syria: What’s Really Happening on the Ground