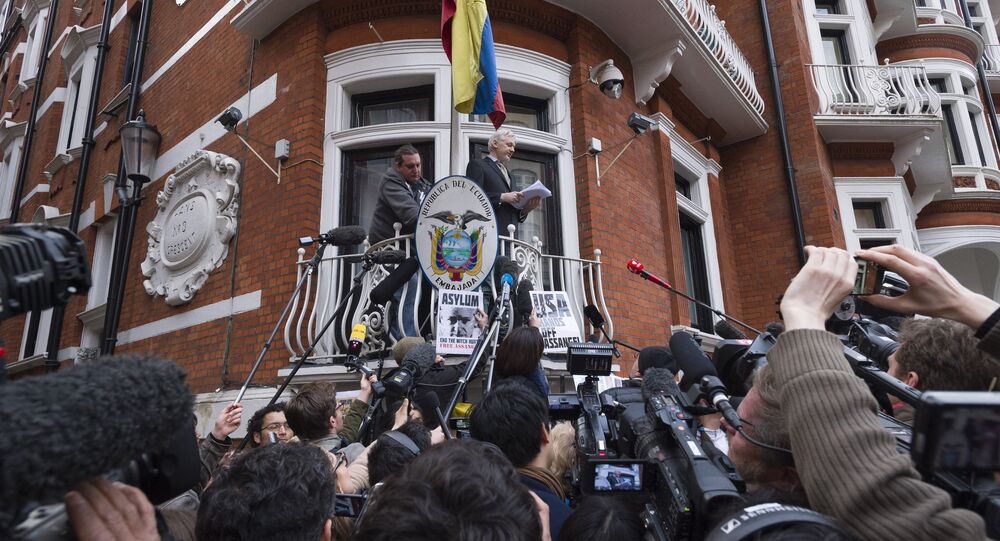 Presidential candidate of Ecuador's opposition Creo-Suma alliance Guillermo Lasso said on Thursday that he would give WikiLeaks founder Julian Assange one month to leave the Ecuadorian Embassy in London in case he secures victory in the next week's election.

MOSCOW (Sputnik) — Ecuador is set to hold the first round of election, comprising eight candidates, on February 19, while the runoff is scheduled for April 2. The country's President Rafael Correa is not running in the election for the first time in more than a decade. The ruling PAIS Alliance party will be presented by Lenin Moreno, a former vice president. Ex-banker Lasso is his main competitor who, according to the latest statistics, is just 7 points behind Moreno. Cynthia Viteri from the Social Christian Party and former General and Mayor of Quito Paco Moncayo are also among major candidates.

© REUTERS / Henry Nicholls
Give Me My Life Back: Assange Urges UK, Sweden to Unchain Him

"The Ecuadorian people have been paying a cost that we should not have to bear. We will cordially ask Senior Assange to leave within 30 days of assuming a mandate," Lasso said in an interview with the Guardian newspaper.

Assange has been residing at the Ecuadorian Embassy in London since 2012 for fear of being extradited to Sweden on rape allegations. The WikiLeaks founder denied the accusations. On December 4, 2015, the UN Working Group on Arbitrary Detention's (WGAD) ruled that Assange's detention was arbitrary. The United Kingdom and Sweden have been refusing to recognize the legitimacy of the decision and to end Assange's prosecution.

On Monday, Assange called on Sweden and Britain to free him in accordance with WGAD ruling, while the Swedish Prosecution Authority said it had not received any official requests from the WikiLeaks founder to end proceedings against him.