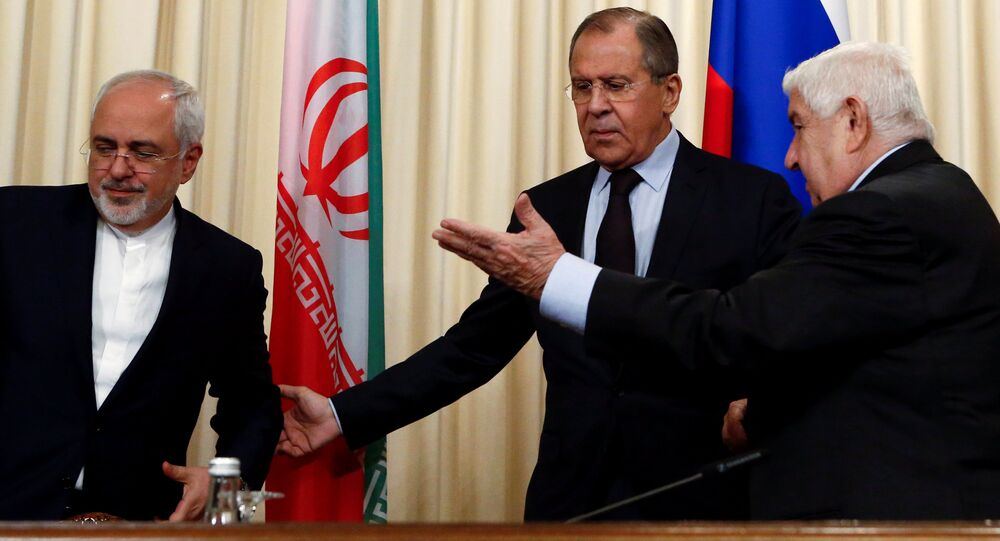 President Donald Trump has described Iran as "the number one terrorist state" which has "total disregard" for the United States, eliciting a sharp response from the Kremlin. Political analyst Alexander Kazakov told Sputnik that the new US administration appears to be concerned with Russia, Turkey and Iran's growing clout in the Middle East.

Trump is "most likely worried about the emerging triangle, comprising Russia, Turkey and Iran. There is nothing surprising about it. This triangle will de facto control the situation in the Middle East. The United States has been present in the region for a long time and has no intention of withdrawing. This is why this triangle is a serious issue for the US," Kazakov explained.

© Sputnik / Sergey Guneev
'It Will Be Up to Putin to Smooth Over Relations Between Tehran & Washington'
Earlier this month, US President Donald Trump referred to Iran as "the number one terrorist state" which has "total disregard" for the US, prompting Kremlin spokesman Dmitry Peskov to say that Russia holds an opposite view on Iran. "We have cooperated on a range of issues. We value our trade and economic ties which, we hope, will further develop," he said, adding that both countries enjoy good relations.

On Monday, Russian Foreign Minister Sergei Lavrov emphasized that Iran "has never been seen having any ties" with terrorist organizations. Instead, Tehran has greatly contributed to tackling Daesh in Syria, he added.

"Recent developments leave no doubt that the Kremlin has decided to 'bare its teeth' towards the new US administration. At the same time, [Moscow] has also pointed to two significant aspects in relations between" Russia and the United States, Alksnis wrote for Vzglyad.

On the one hand, Russia's response "clearly shows" that the Kremlin does not intend to be in a "weak position" when engaging the White House.

"Contrary to what many think, the Kremlin clearly understands that Trump is in no way 'pro-Russian.' He is undoubtedly a 'pro-American' president. At the same time the new US leader is pragmatic. He is also known as a talented and constructive, but tough negotiator. As a result, a 'weak' position [at this stage] could have long-term negative implications [for Moscow]," she explained.

Alksnis further said that Iran could potentially become a "grave point of contention" between Russia and the United States.

© AFP 2020 / AHMAD AL-RUBAYE
Russian, US Analysts Urge Trump Not to Make an Iraq-Like Mistake with Iran
"The new administration has apparently singled out Iran as its 'number one enemy.' Remarks of Donald Trump and his team on the issue are extremely tough. Some have said that the nuclear deal, which has become one of the key achievements of the previous administration, could be canceled. First anti-Iran steps (new sanctions) have already been taken," she detailed.

Kazakov shared these sentiments, saying that Iran will "definitely" become one of the key issues plaguing the dialogue between Russia and the US, adding that it was linked to the changing balance of power in the Middle East.

Delicacy of Diplomacy: Is Russia Ready to Side With Washington Against Iran?